There is debate within the reptile community about how to proceed when a gecko is born with defects that make life possible, if not “normal”. Some breeders prefer to cull these hatchlings in the interest of reducing the chances that a genetic anomaly will be passed on. Others feel that any creature which can live without pain should be cared for. This is the story of a “special” gecko who seems to have enriched the lives of those around her. 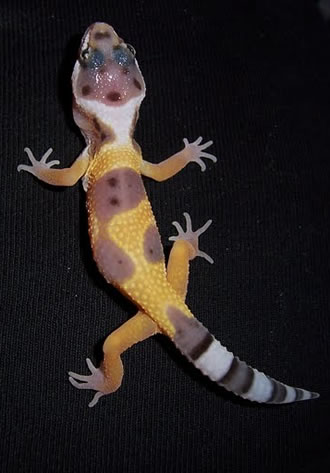 In October of 2008 I was given a pair of leopard gecko eggs by an acquaintance who didn’t own an incubator. In December the eggs hatched and it was clear that both hatchlings had congenital anomalies. They were smaller than expected, their limbs and heads were misshapen, their tongues were shorter than normal, and, most distressing, their eyes were very small with malformed eyelids. They were willing to eat, when hand-fed, so I decided to give them a chance. A close friend asked to adopt the more impaired hatchling, after caring for her for a short time and enjoying her people-friendly and calm manner. She named her Sela (short for Elisel) and we set her up in a 5 gallon enclosure. All of Sela’s “furniture” was kept in the same place at all times since we weren’t sure whether or not she could see.

Her new owner painstakingly hand fed her as often as Sela was willing to eat. In order to succeed at this, Sela needed to be held in one hand, and small mealworms placed in the side of her mouth. Sometimes she needed help to get the mealworms into her mouth properly (due to her malformed tongue) and sometimes she needed more encouragement and persistence for her to be able to even try to swallow the food. Gradually she seemed to become better at finding her way around her enclosure. She would often circle the perimeter of her home in the evenings with her face bumping along the walls, and soon learned how to find her humid hide where she would lick the droplets of water. Eventually she was able to find her warm hide and to sleep inside it during the day.

When she was 4 months old, I took care of Sela for a week She weighed only 5 grams, still required total care for feeding and shedding and her head was grossly misshapen with a lump of some sort growing in the area of one eye, and pushing this eye opening out of place. (It was unclear at this time whether there was a formed eye on this side.) In all honesty, I was repulsed by her at first, but was soon won over by her willingness to be fed and her explorations of her temporary cage, in which, of course, I arranged all her familiar furniture as she was accustomed to it.

During the following 6 months, Sela continued to grow very slowly. She still required hand feeding with a great deal of patience and stimulation to get her to begin each feeding session. She was still unable to shed on her own most of the time. Despite these problems, as Sela grew, it seemed as if her left eye were beginning to develop. What had initially looked like a sunken black mass began to display a pupil which reacted to light. Although her eyelids remained deformed in the corners with an occasional mucousy discharge, she began to explore her environment more and would even sometimes climb on top of her ceramic hides. She also began reacting to visual cues, such as the motion of a person walking past her tank. She was still very small, but began to develop a more adult feeding pattern of eating every other day. 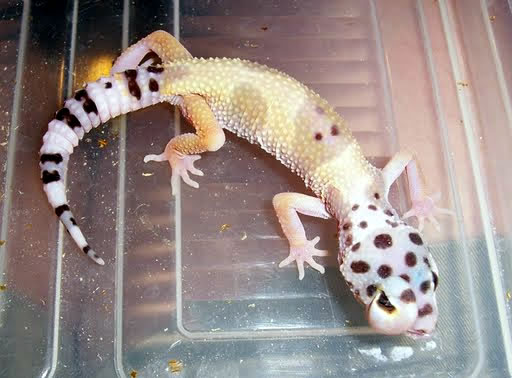 In September, the lump under Sela’s right eye had grown so big it couldn’t be ignored. The eye was pushed out of place and she had some difficulty keeping her head level. When, during a shed she attempted on her own, she bruised the skin around the lump, something had to be done. At the age of 9 months and weighing 11 grams, Sela went to the herp vet. The vet diagnosed either an infection or a mucosele –a mucous-filled cyst likely caused by a blocked or poorly developed tear duct. Sela was injected with a small amount of lidocaine and the lump was slit with a scalpel, and a blob of clear goop removed. Immediately, her eye returned to a more normal position and the small incision closed. We were warned about the possibility of infection or scarring, but Sela has continued to grow and thrive and appears much more comfortable. Observation of the right eye socket shows that there is an eye here too, with a recognizable pupil. 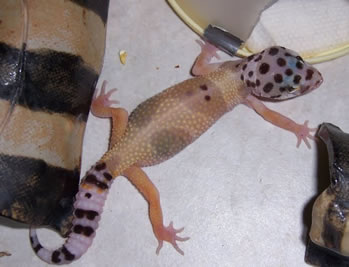 We are still not sure to what extent Sela is able to see. She does not attempt to hunt for food and still must be hand fed. She is now eating small to medium superworms, has gained 4 grams in the month since her “surgery” and is developing a nice little pot belly. She needs to have her eyes moistened occasionally since the corners of the eyelids are not well-formed and her tongue is too short for her to be able to clean them by herself. She will always require a great amount of care and there is no guarantee that her mucosele will not recur. Sela’s owner has found the daily interaction with her to be interesting and enjoyable, and finds that caring for a creature who clearly needs her is more motivating than one that requires only occasional maintenance. She feels strongly that if Sela can thrive she should be given the opportunity, and is willing to continue to put in the extra time and attention Sela requires.