In today’s economy we are all searching for ways to save money. Breeding your own feeders is one of the best ways. For the past several years I’ve been breeding superworms for all my geckos. It’s a fairly simple process and with some time and patience you can raise your own feeders.

Superworms have 4 stages of life: egg, larva, pupae and beetle. The beetles are the only ones that reproduce. Breeding superworms is very similar to that of mealworms but with one difference. They will need to be separated individually so they can pupate. If you keep them together you will never obtain beetles to start another generation. Superworms grow slowly and it can take 5 months or longer (depending on the temperature you keep them at) to become large enough to start the “morphing” process. Pupation is an essential process and the only way to obtain beetles for breeding. I keep all stages of superworms at a temperature between 70 and 80 degrees Fahrenheit.

Choose the largest superworms possible and place a single worm into an empty 35mm film container. I’ve found film containers work best as they require very little space. Due to the digital era they are becoming harder to find but I’ve always had good luck at the Wal-Mart and Costco photo centers. If you can’t get them you can always use plastic bead boxes for crafts, baby food jars etc. 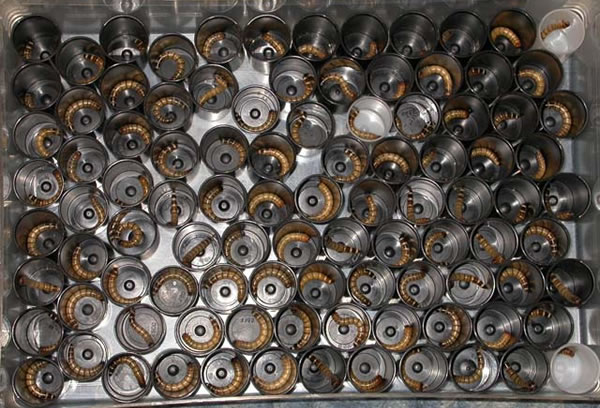 Leave the superworm in the empty film container with no food or water. Adding food or water to the film container prolongs the time it takes them to pupate and makes a bigger workload for you. As long as they are very large larva you should have very few to no deaths. 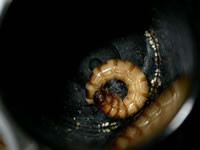 After several days the worms will become dormant and begin curling to a letter “c” or “e”. This is the start of the morphing process. Any superworms that are straight looking, hard or black are probably dead. The process from larva to pupae takes 1 to 2 weeks. 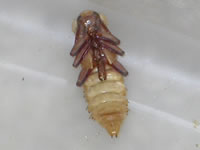 Once the worm has pupated it will look like a white or cream colored “alien” as most people call them. This is their third stage of life. You can either leave them in the film container or place them all in a separate container. I remove mine and place them in a separate container as it saves space and then you can start another larva in the film container. When their legs turn darker in color you’ll know a beetle is about to emerge. The process from pupae to beetle takes about 2 weeks. 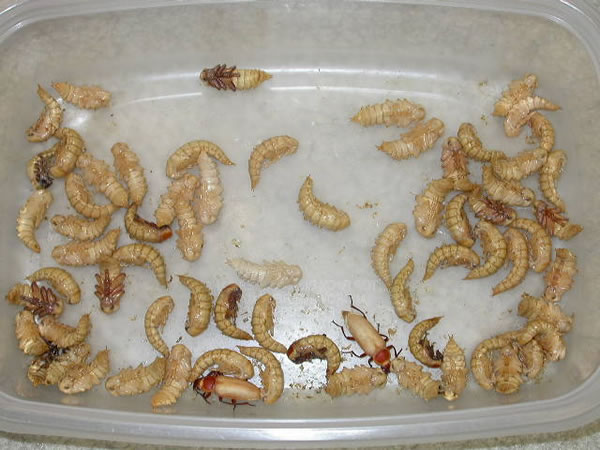 Before removing these beetles you need to put together a new breeding container. I use trays that are (14” x 10” x 3.5”). You can use really any type of container such as Rubbermaid and Sterilite but I’ve found cat litter pans to be most effective. Add about 1 inch of wheat bran or a pre-made gutload to the bottom of the container. The beetles will eat and lay their eggs in this. Try not to use coarse bedding such as oats unless you blend it to a powder. This will make it easier to separate the superworms later for cleaning or feeding your animals. In one corner I add a small piece of egg crate so the beetles have a place to gather. Otherwise they may wander through the container digging up eggs and eating them. You may now move the beetles to this container. Offer potatoes, carrots, fruits or water crystals as a water source. Moisture is extremely important for the beetles just as it is for the superworms themselves. A lack of moisture will result in beetles preying on eggs, newly hatched babies and other beetles. 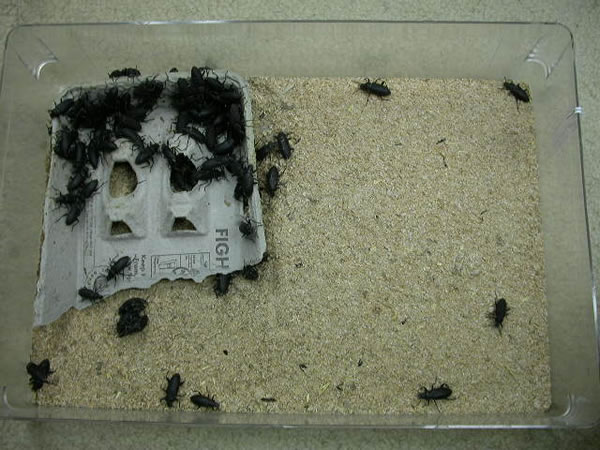 About every 2 to 4 weeks (depending on how many beetles you have in one container) remove the beetles from the bedding and place them in a fresh container as described above. This allows the eggs to hatch and furthers your chances of obtaining more babies. If the beetles are left they will prey on the eggs and possibly the newly hatched larva. The newly hatched worms could do the same with each other. Adult beetles can live up to 5 months with a female laying nearly 500 eggs in her lifetime.

The key to hatching is heat and most importantly moisture. For the babies I keep the temperature around 78 degrees Fahrenheit. Add small chunks or slices of potato, carrot, apples etc on the bedding surface. This will provide moisture for the newly hatched babies. Once the babies grow larger you can use water crystals if you wish.

Congratulations! You have now successfully completed your first breeding cycle. It will take time before your colony is established but once it is you’ll have a continuous supply of superworms!

Cody Castellanos is the owner of Pro Geckos and works with various gecko species including leopard, fat tails and Nephrurus. He also stocks a full line of supplies to meet all your needs.