Anyone involved in the online leopard gecko community can recite the ideal leopard gecko setup: paper towel or tile, belly heat controlled with a thermostat, a dry hide, a humid hide, and a water dish.  This simple setup works, and it has saved the lives of many leopard geckos previously kept in inadequate conditions due to ignorance.  Still, many keepers wonder about creating more naturalistic enclosures.

I fell in love with leopard geckos when I took in a rescue in terrible condition.  At the time, I didn’t expect him to live, but he made an incredible recovery once provided with proper care.  He spent over a year in a simple, modern setup before being moved into a larger display cage with more hides and climbing areas.  I installed a small light fixture with a low-wattage UVB compact fluorescent bulb.  A hardy haworthia succulent followed that.  Even then, my gecko’s home didn’t seem adequate.  I’ve spent a great deal of time wandering zoos and nature centers, transfixed by the elaborate habitats and their inhabitants.  My leopard gecko’s enclosure, while it provided all his basic needs, looked barren in comparison. 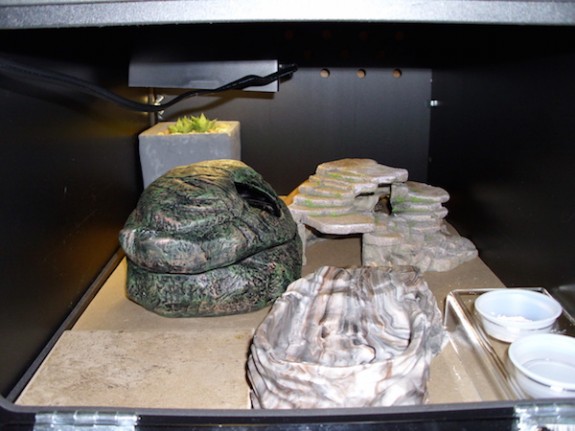 I began researching the natural habitat of leopard geckos.  My search for natural reptile habitats in captivity led me to the resurgent bioactive reptile community.  Because naturalistic enclosures with substrate cannot be cleaned in the standard way, bioactive enclosures use a population of invertebrates and microbes to break down waste and keep the substrate clean.  While tropical and forest setups are more common, some pioneering individuals have successfully designed enclosures for desert species such as bearded dragons and Uromastyx.  I wondered, could I adapt those methods to my leopard gecko cage?

The majority of bioactive enclosures use lighting to provide basking heat.  I wanted to utilize the existing floor heat and cooler lighting in my leopard gecko cage instead.  One of the reasons I enjoy leopard geckos is the fact that they do not require large enclosures or heat lamps.  I experimented with cycling the heat in my cage, warmer during the day and cooler at night, and noticed that my gecko seemed healthier and brighter overall when provided with constant, steady floor heat.  This floor heat would not work through thick layers of bioactive substrate.  I had the idea of building substrate around caves while leaving the insides bare, which would allow me to continue using belly heat and eliminate the need for a heat lamp.

The next question was how to make the enclosure bioactive.  For desert setups, hardier insects are needed, such as lesser mealworms, mealworms, and superworms, and their beetles.  Having humidity in the lower layers is also vital in order to maintain a population of good bacteria and fungi to break down waste.  Other bioactive builders reported success with creating small humid refuges for custodians such as isopods.  With that in mind, I decided to create a more humid substrate to use in a limited area while keeping the majority of the surface a hard-packed clay mix that would match native leopard gecko habitat.

The concept solidified over the following months.  I purchased various substrates and experimented with small batches until I found mixes that behaved as I wanted.  Finally, I was ready to build my desert. 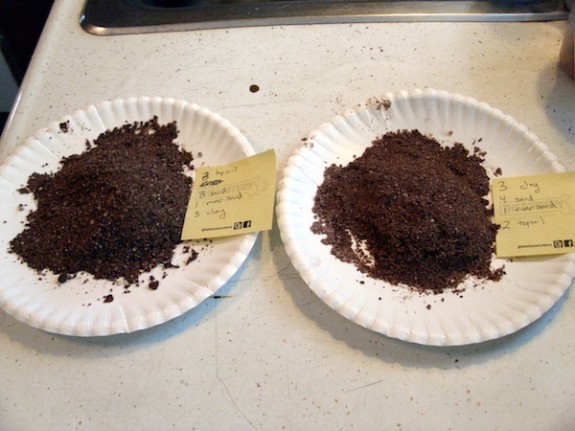 I cut out a piece of brown paper and drainage mesh to fit the floor of the cage.  Then, I arranged the hides and cage furniture on the mesh and traced them with chalk.  This allowed me to cut a piece of drainage mesh for the humid portion of the cage without overlapping the hides.  With most of the hides placed in the cage, I put a thin layer (approx. 1 inch) of light-weight drainage medium on the humid side and covered it with drainage mesh.  This small area would allow excess water to drain from the substrate and prevent it from becoming saturated. 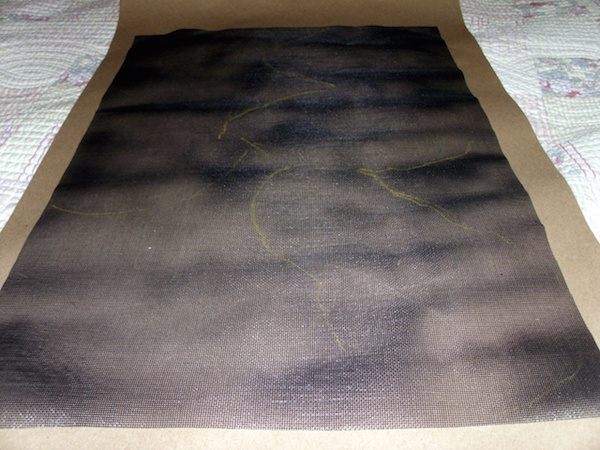 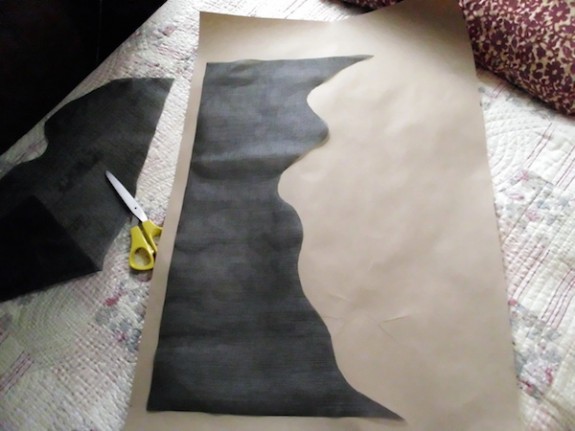 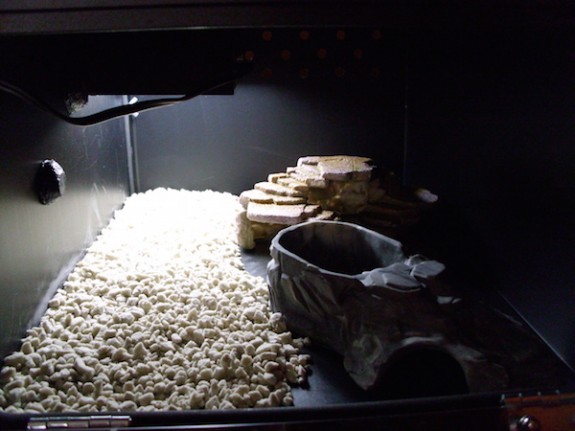 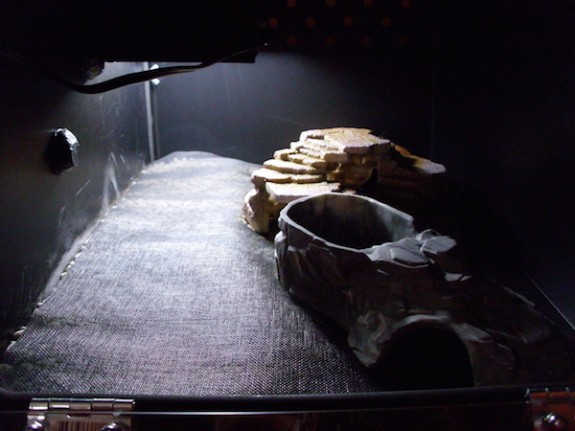 The next layer was designed to hold enough humidity to support the bioactive custodians. The humid mix was 2 parts sand, 3 parts fine coco fiber (Zoo Med Eco Earth), and 3 parts organic potting soil.  To jumpstart bioactivity, I seeded the humid mix with ¼ teaspoon Bene-Bac (bird/reptile powder) and 2 teaspoons organic compost starter.  I mixed the substrate well with water to make it damp and then packed it loosely around a potted haworthia plant and the gecko’s humid hide.  I chose to keep the plant potted so I could provide a different potting mixture and protect its roots from digging. 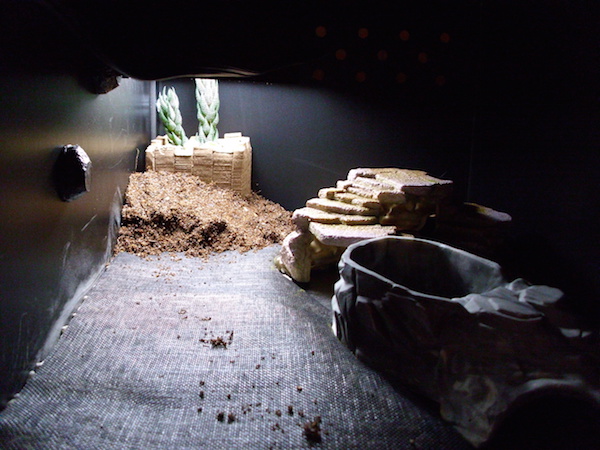 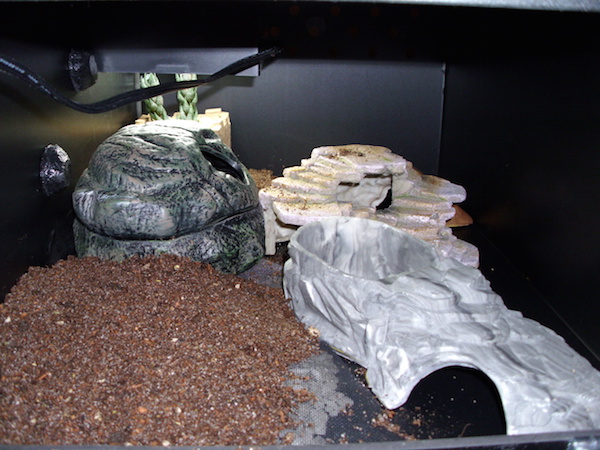 The final layer was the clay substrate, designed to be shaped when wet and dry to a hard crust.  This mix was 4 parts Zoo Med Excavator clay, 3 parts sand, 1 part Exo Terra Riverbed sand (finer grain), and 2 parts organic potting soil, which I made wet enough to clump.  The clay substrate was packed tightly around the furniture and sculpted into a desert landscape.  Because I wanted to be able to remove the humid hide, I left some wiggle room around it.  A small area up front was not covered with clay.  This was to be the humid refuge for the custodians.  The final touches were small cork bark flats, a feeding station, and a magnetic wall cave to add some climbing opportunity. 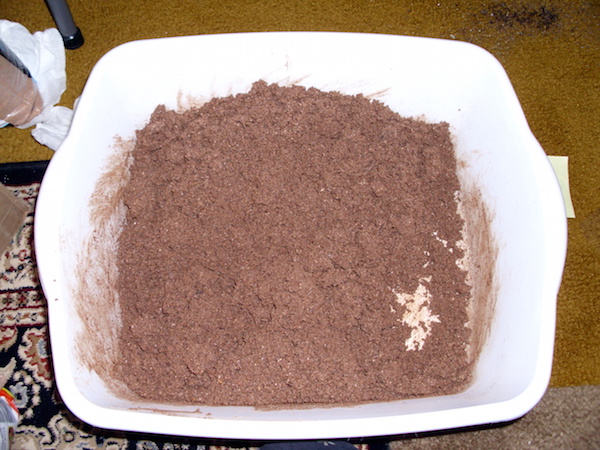 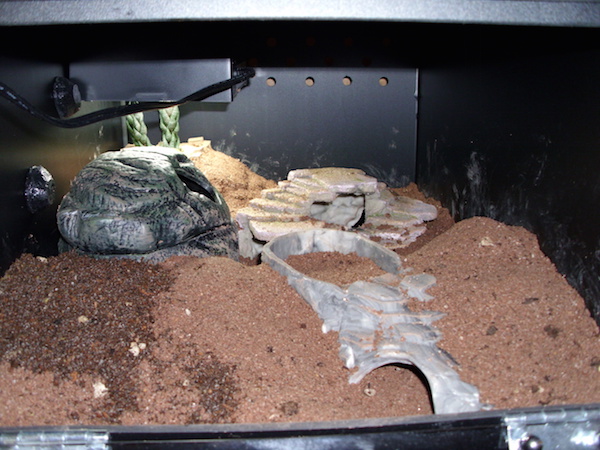 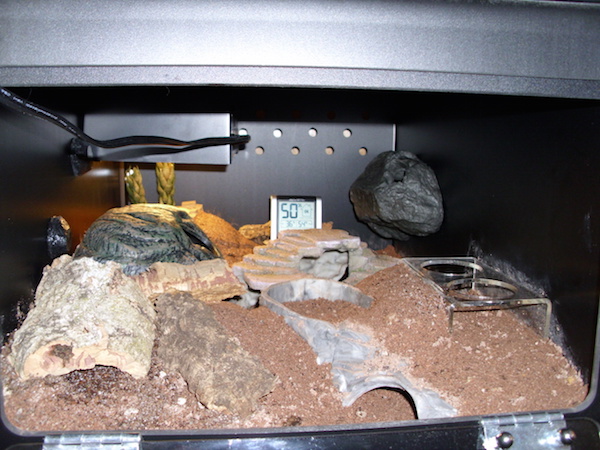 The cage was left open for a week, and I occasionally ran a fan into it to accelerate the drying process.  When the surface had hardened and relative humidity remained below 60% with the door closed, it was time to add the insects.  I chose to use mealworms and beetles (Tenebrio molitor), superworm beetles (Zophobas morio), pill bug isopods (Armadillidium vulgare), and tropical springtails.  I also did a bit of local collecting, which provided me with worms, millipedes, and native isopods.  I added them to the humid area and covered with oak leaf litter before replacing the cork bark pieces. 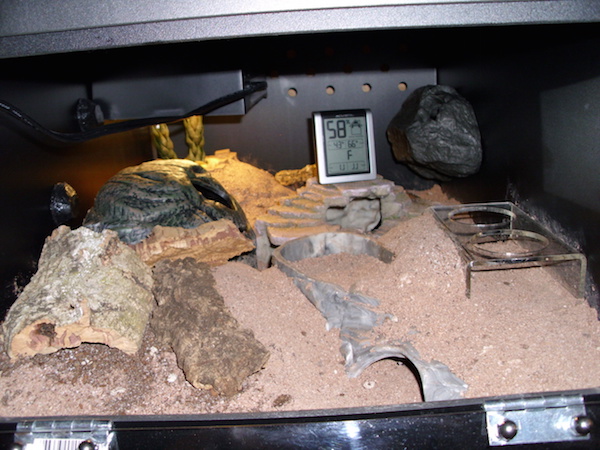 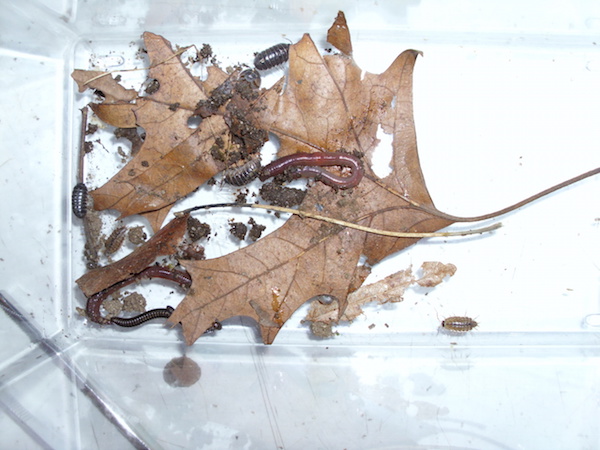 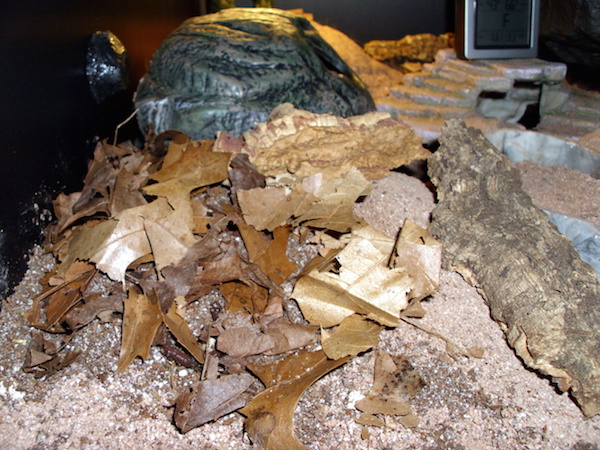 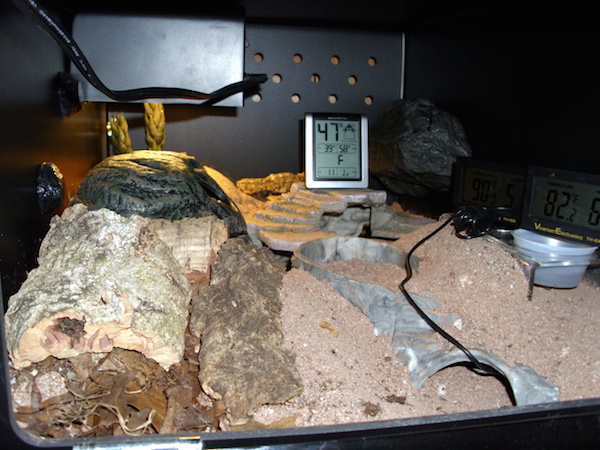 The bioactive enclosure was allowed to cycle for almost a month.  During that time, I monitored the temperature and humidity closely.  I misted the humid areas every other day and watered the plant and humid refuge every other week.  I also added a bit of vegetable and sprinkled some insect chow in the corners every other day, which helped encourage the custodians to forage.  The insect population did very well, and I even spotted new young as they began breeding. 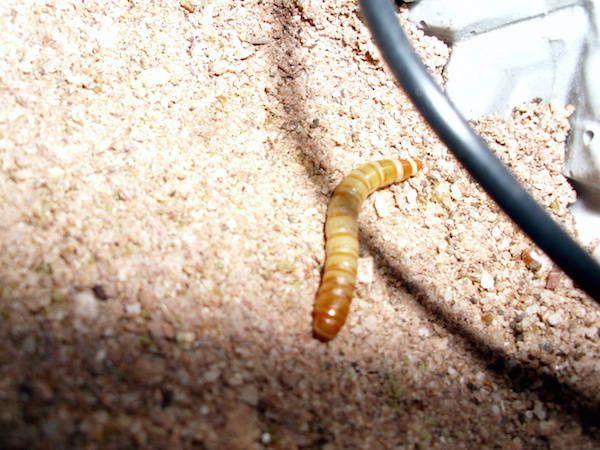 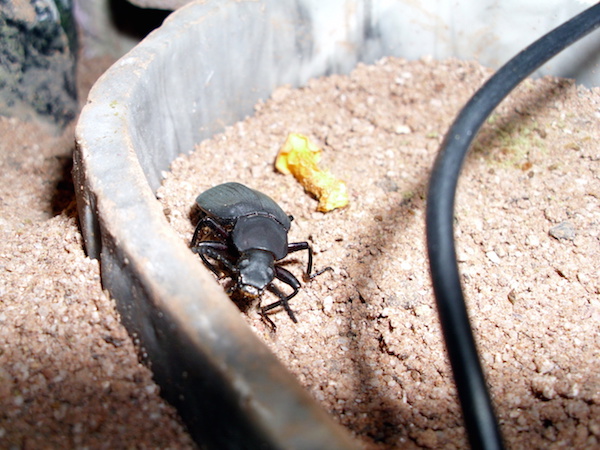 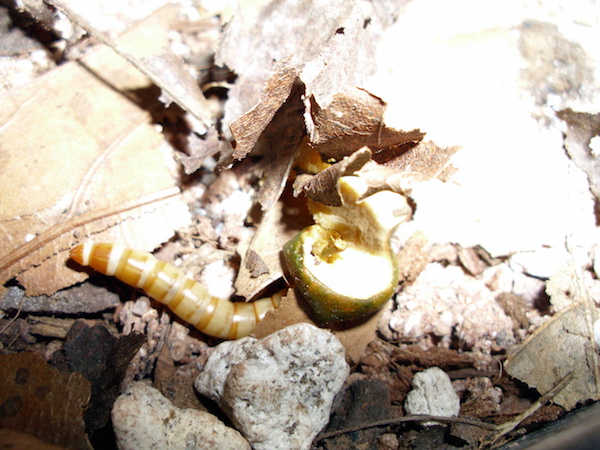 By the time a month passed, the relative humidity was 45% – 55% during the day, and the floor temperature inside the warm hide was 88 – 90 ℉.  The air temperature above ground was 75 – 79 ℉ during the day.  The small light fixture heats the air on the warm end of the cage during the day, and that temperature range is typical for my display enclosures in summer.  The relative humidity was slightly higher in the bioactive cage, but this range is fine for a leopard gecko.  In fact, “The Eyelash Geckos” goes so far as to recommend that humidity never drop below 50% for the species.  Unlike some of their better-adapted cousins, leopard geckos have thin skin that makes them prone to dehydration.  They do not benefit from exceedingly dry conditions.

While the enclosure was cycling, I had my leopard gecko tested for fecal parasites by our veterinarian and monitored him to ensure he was in good health.  I did not want to introduce dangerous parasites or bacteria into the enclosure.  When I was satisfied that the environmental conditions in the cage were stable and my gecko was ready, I introduce him to his new home.  The first few days, he was very restless and nervous.  This was to be expected, as I had essentially taken him out of his home territory.  After the first week, he had settled in and begun eating regularly.  It has been over a month since, and he is back to his normal behavior, eating well and moving around the enclosure confidently.  He also continues his habit of occasional morning basking, which tells me all I need about the practice of providing UVB lighting to leopard geckos. 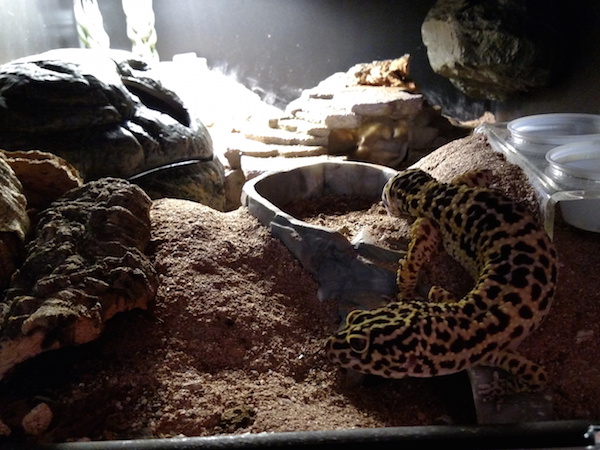 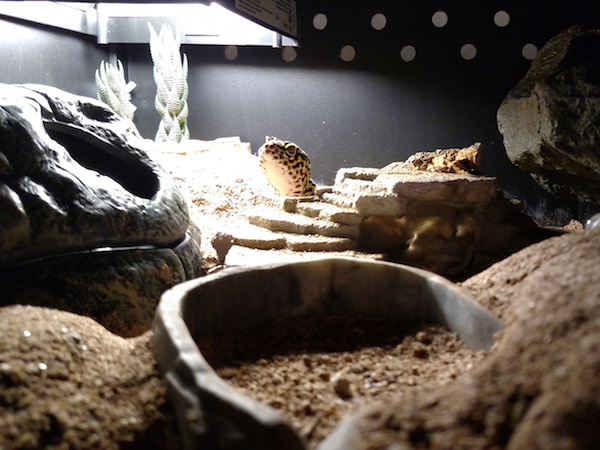 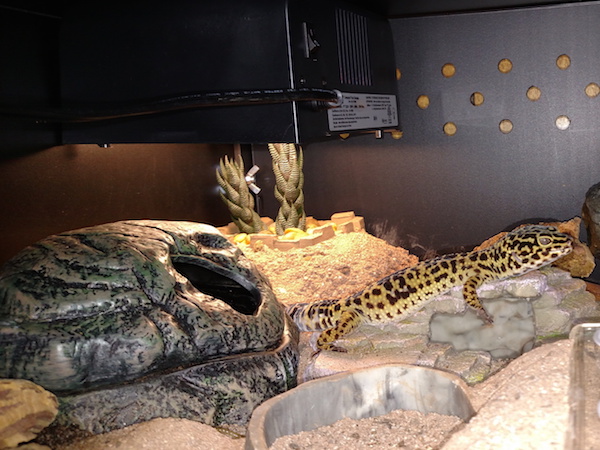 Maintaining a bioactive enclosure is no more difficult than keeping a simpler cage.  The custodians devour feces and food scraps, while the hard, white urates remain untouched.  I bury some urates into the humid area to encourage the growth of bacteria that will break down waste, and I remove the rest.

I still add bits of vegetable and insect chow a few times a week to keep the population of custodians going strong.  New leaf litter also needs to be added every so often, as it is eaten.  Make sure you do not feed so much that leftover food begins to build up–only feed what your custodians will devour in a day or so.  If your population gets out of control, you can cut back on the food provided.

The humid areas are misted every other day and watered every week or so to keep them damp, not soaked, and the haworthia is watered well every two weeks.  I expect to cut back on watering during the winter, when the lower temperatures will cause moisture to evaporate more slowly.

This project has been very rewarding, and I plan to repeat the transition with other geckos in the future.  Part of my goal in writing this article is to show other leopard gecko keepers that a natural, living desert vivarium is within reach.  There is a lot of backlash against any particulate substrate in keeping leopard geckos, based on extreme cases of neglect and poor husbandry, but these creatures are designed for desert living.  They are more than capable of thriving in an environment with loose substrate.

I feel one key point in all this is to create a bioactive ecosystem.  A substrate, by itself, is bound to build up waste and become unhealthy over time, but creating an environment in which waste is degraded naturally and the substrate is shifted and maintained by natural means opens the possibility of moving beyond a bare landscape.  Once a bioactive enclosure is running, dedicated monitoring and maintenance can ensure it thrives for many years.

Another vital point is to make sure you achieve the right environment for your species.  This means carefully monitoring temperature and humidity with precise tools (ditch those dials!).  Make sure you have a hiding area that reaches the appropriate temperature for digestion and good health.  There needs to be humid refuges where your gecko can stay hydrated and shed easily.  Overall, your enclosure should be large enough to provide a gradient of both temperature and humidity so your gecko can move to where it is comfortable.

A final point: know yourself and your gecko.  These types of enclosures are not for everyone, and some keepers are much more comfortable with modern, clean setups.  Geckos who are ill or have special needs may benefit from simpler enclosures.  The important thing is providing an environment that keeps your gecko in good health and spirits, whatever way you choose to do so.  If you feel yourself being pulled into the grand setup debate, repeat after me: there isn’t one right way to keep a leopard gecko.

Rachel Gratis is an enthusiastic leopard gecko keeper. She studied biology in college, with a special interest in ecology and natural selection, and she now puts her background to use caring for her collection of pets and contributing to the leopard gecko community.  Her goal is to never stop learning about animals and the natural world. She currently works in Massachusetts as a software quality assurance engineer.