Living in Albuquerque, I noticed that the terrain looks similar to that of the leopard gecko’s natural environment in Afghanistan. I was already interested in trying out a bioactive substrate for my terrarium, but I thought I could do better. I did some research on the climate and terrain to set up a similar habitat for my pets. I chose to simulate the alluvial soil found in Kabul, Afghanistan.

The temperature averages per month in Kabul range from a low of 19F in January to a high of 90F in July. Most of the year, the average temperature is a high of above 70 and a low of above 40. Today, in Albuquerque, it is 90 degrees. That can compare to an average day in July in Kabul. The soil’s temperature here is 75 degrees. The surface temperature is 105 on the surface of the soil and 110 on the surface of a rock. Since I am creating a habitat based on the rich alluvial soil surrounded by water, I’m going to use that 105 temperature as the high surface temperature limit. The low temp will be about room temperature. The air temperature should be within the low 90’s to mid 50’s 6 feet in the air, but lower closer to the ground. The temperature would be more stable at night in the low 60’s– but considering this terrarium is in my house, realistically, the air temperature will be a little warmer than room temperature. It should be in the mid 80’s during the summer and low 60’s during the winter. Sounds pretty close to what I use for them already. It’s about 72F on the end of the tank furthest from the UTH. Directly above the UTH the temperature can range from 110F if the soil is extremely thin, 101F for a little more coverage, and mid 90’s where the leopard geckos hang out. Because of the placement of the hides and substrate coverage, the highest reading I’ve gotten was 99F. The hide directly above the UTH has a clay floor, which helps insulate from the direct heat. 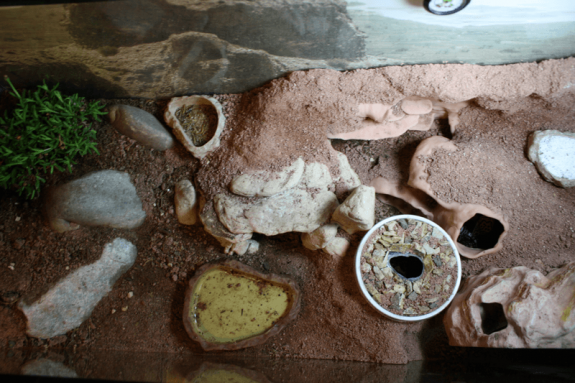 The humidity in Kabul for a typical summer day is around 15%. It rises to 30-55% during the night. My tank ranges from 20-60% depending on the time of day. Generally, the air is really dry during the day and very humid at night because that’s when we turn on the swamp cooler during the summer. The humidity range sounds alright to me.

This part was the hardest to replicate. Although we have alluvial soil in Albuquerque, it is not the same nutrient rich soil that you would find in Kabul – at least not in my backyard, a few miles from the Rio Grande. The soil here is very sandy with very little clay. I decided to use some of the sandy soil from my backyard, mix it with eco-earth, and then mix that with Zoo Med Excavator clay to get the consistency closer to what it would be in their native habitat (plus less loose substrate to kick around and swallow). The result is a hard soil surface with moist soil underneath to promote the good bacteria growth and digging behavior by the leopard geckos. I purchased some micro-organisms used to boost composting and reduce odors (non-toxic, animal safe) and sprayed the soil with the mixture. This should help create a bioactive substrate to take care of dead feeders and poop.

In their natural environment (the open alluvial soil that I am replicating) vegetation is minimal. Leopard geckos have been spotted near the Zygophyllum bushes in the same area, so I decided to get a small plant that would have the same light/space requirements with the same sort of look to it. I chose the Delosperma ‘Jewel of Desert Peridot’, a non-toxic Ice Plant. 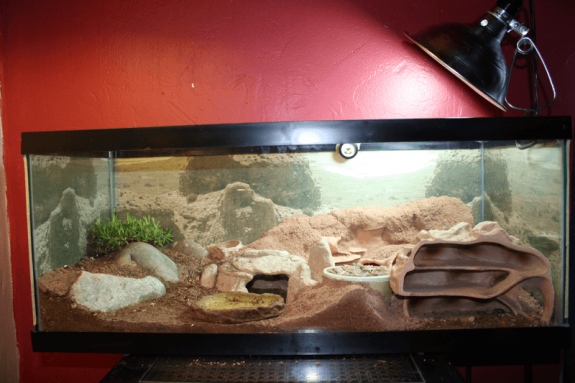 In the wild, leopard geckos have been found hiding in rock crevices, so all of my hides look like rocks and have small areas for them to crawl in and adjust themselves to the appropriate temperature. They have a few moist hides, tunnels, crevices, and a large open cave to stretch out, cool off, and still have some privacy. In total there are 11 separate hiding places.

To match their native habitat, I will give them the same amount of “sunshine” hours they receive in the wild: December – March: 6 hours, April: 7 hours, May: 10 hours, June – August: 11 hours, September – October: 9 hours, November: 7 hours. To allow the leopard geckos to photosynthetically create vitamin D3, I have a UVB 2.0 bulb on for 3 hours a day. The way the tank is set up, they will rarely be directly under the light unless they are moving from one area of the tank to another (during the day when they are usually sleeping). But, there are plenty of “windows” and cracks for the light to shine through in small rays providing them with a little bit of light most days, depending on where they are hiding at the time.

At this point, everything is set up and I am excited to see how they react to their new environment. I’ve already seen digging behavior and they seem to like to be outside of their hides more often.

(I based my chosen environment on the research by Prof. Dr. Bayram GÖÇMEN at http://www.bayramgocmen.com/emacularius.html.)