Breeding season for most geckos is in full swing and gecko forums are full of anxious questions about eggs and incubation:  Is my moldy/dented/shriveled/green and gooey egg OK?  Why haven’t I gotten any fertile eggs yet?  When will my gecko ovulate/lay her eggs?  When will my eggs hatch?  Face it, we’re much more broody about those eggs than the geckos.

There’s no substitute for experience and the advice of many experienced breeders.  This article is an attempt to address some of the basic, and often recurring questions about eggs during the breeding season.

Ideally, the only “accidental” fertile egg-laying (some female geckos lay infertile eggs without benefit of a male) should occur when an already gravid gecko has been purchased unintentionally.  Other instances, usually described as: “I never saw them mating”, “I only put them together for a little while”, “he got into her cage somehow” are either due to naiveté or carelessness.  Geckos are programmed to breed and will usually do so given half a chance.  If you don’t intend to breed, keep your male and female geckos apart.

If you do choose to breed, it goes without saying that you will have adequate experience with the  gecko species you’ve chosen, a good understanding of the incubation needs for the species you’re breeding, the resources to provide appropriate incubation, food, housing and medical care for breeders and babies, males and females in good health of the appropriate age and weight, and the understanding that many of the easier species to breed are already being produced to excess which makes gecko breeding an unlikely profit-making venture. 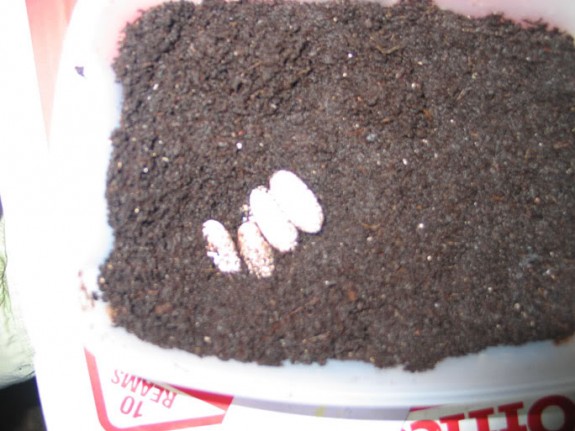 Where are the Eggs?

Assuming that the criteria described above have been met, and the male has been successfully introduced to the female, the long wait for eggs begins.  For most gecko species, the female will lay eggs at least 2 weeks after copulation.  Eggs are usually visible in the gecko’s abdomen as laying time approaches and can be seen by gently bending the gecko back to look if you have a species that can be handled, and  by  trapping the gecko in a deli cup or against the side of the enclosure to view the abdomen for species that cannot be easily handled.  There are a number of reasons for the failure of eggs to appear visually:

Sometimes, when all factors appear to be favorable, the female turns out not to be a good egg producer.  I had that experience in my first breeding season with a female “proven” breeder who, in the three seasons I attempted to breed her to otherwise successful males, produced a total of 3 hatchlings.  I have also found in my own experience, that frequently females who produced an abundance of viable eggs in one season, do poorly in the  subsequent season.  If you have ruled out all the obvious husbandry issues and still no eggs have appeared, you may need to simply go with different breeders.  I would advise giving the female up to 8 weeks after ovulation has been observed to produce eggs, especially if it’s the beginning of the breeding season.

Gecko eggs are round or oval (depending on the species) and initially somewhat soft, hardening within the first few days of being laid.  Many eggs grow somewhat bigger during the incubation period and some sweat (produce small droplets of water that adhere to the outside of the shell) or dent soon before hatching.  Depending on the species, incubation is carried out in an incubator, in the home at room temperature or in situ.  Usually, but not always, if in egg is candled by shining a light behind it, the developing embryo can be seen, initially as a “bulls-eye” shaped red form.

Some gecko eggs are obviously infertile as soon as they’re laid.  These eggs are usually extremely soft and floppy, often described as “water balloons”.  Other infertile eggs may be flat with poorly formed shells or shriveled.  Shriveled eggs usually are due to the eggs being laid in a section of the enclosure that doesn’t provide the proper humidity to maintain it, such as an egg laid in a leopard gecko’s dry hide.  In many cases, this happens because the gecko is inexperienced at laying eggs in the proper place, or the gecko somehow senses that the egg is infertile and lays in an inappropriate place.  In general, it’s advisable to incubate all eggs until it’s clear that they are no good (see below).

Gecko eggs can initially looking viable but then start looking “bad” at any point during the incubation period.  Eggs that don’t look right are described as: moldy, shriveled, discolored, dented, smelly, leaking.  This is the point where many egg-related questions come up.  As long as the incubation temperature and humidity are correct, there’s nothing that can be done about eggs that “don’t look right” except to incubate them until they either hatch or stink.  Assuming that the incubation conditions are correct, most eggs that initially looked good begin to look “bad” because the embryo or fetus dies during incubation.  This can occur because of defects that make the fetus non-viable or for other unknown reasons.  Some gecko species are more difficult to breed than others due to the eggs’ fragility or incomplete understanding of proper breeding conditions.  Some species seem to have reduced fertility; I have consistently had an 85% hatch rate with my leopard geckos during the past 2 seasons, compared with a 50% hatch rate with my African fat tails.

New breeders frequently wonder what they can do to “save” eggs that begin to look bad.  As long as the incubation conditions are correct, there is really nothing to do.  The egg is viable, or it’s not; it will hatch or not.  The best treatment for any egg is no treatment at all.

When Will the Eggs Hatch?

The hardest part about gecko breeding, in my opinion, is waiting for those eggs to hatch.  There is a time range for gecko egg hatching based on species and incubation temperature, with eggs hatching sooner when incubated at higher temperatures.  It’s important for a breeder to know the expected temperature range given the incubation conditions but also to be prepared for eggs that may hatch outside the range.   This is really a case of letting “nature take its course” despite the often artificial conditions of egg containers and incubators.  If the egg is meant to hatch, it will hatch; if not, it won’t.  Try hard to refrain from handling, candling or otherwise disturbing the eggs.  If an incubator is used with an airtight egg container, the container should be opened weekly for air exchange but there is no need to mess with the eggs.  Eggs that look mildly “bad” should be left alone; more than one breeder has had a funky looking egg hatch out a beautiful baby.  If it’s clear that the egg is no good, and it will be clearer with experience which eggs are no good, that egg should be removed.

Although there may be situations where an egg should be “pipped” (i.e. manually opened), in general it is not a good idea.  Hatchlings that are not strong enough to emerge from the egg on their own will not become healthy adult geckos.  Eggs that are pipped by impatient breeders can contain babies that are not yet ready to hatch even though the calendar says they should be.

One way to pass the time waiting for eggs to hatch is to keep careful and detailed records.  In addition to providing valuable information for the current and future seasons, record-keeping can give you something to do related to the eggs without disturbing them.  In addition to keeping clutch laying and hatching records, I record in my journal most nights how many weeks and days it’s been since the lay date for each egg.  It’s much safer for the eggs when the breeder broods over facts and figures than what’s in the incubator.

You should now realize that the best advice about successfully hatching gecko eggs can be boiled down to the following:

Here’s to a healthy and successful breeding season to all those who choose to breed.