A working incubator is a crucial ingredient for a successful reptile breeding season.  Eggs do hatch in the enclosure and in appropriately warm parts of the home but generally, the hatch rates are higher when the temperature can be carefully controlled.
During my 10 years as a gecko breeder, I have used three different incubator models.  Here is my story, presented not to give a scientific accounting of each type, but as a narrative explaining my journey to a “perfect” incubator (I chose not to try to build my own incubator for a variety of reasons).

Like most novice gecko breeders, my first incubator was the classic styrofoam Hobovator.  I had been told that the thermostat sold with the Hobovator was relatively  unreliable, so in addition to spending the $50 for the Hobovator, I also spent more than $100 on a proportional thermostat from Big Apple Herp.  With everything set up and ready to go in my bedroom, I awaited the results of my first breeding season.

The Hobovator worked fine.  I produced 13 leopard gecko offspring the first year from 2 females.  During the next 5 years I produced a decent number of geckos of 3 different species (African Fat Tails, Coleonyx, leopard geckos).  The biggest annoyance was having to trek down to the basement (I live on the second and third floors of my house) at least twice daily to deal with the incubator.  I decided I wanted an incubator that cools as well as heats.

At the end of 2009, after a mega-season with my Hobovator, where I produced approximately 90 geckos (way too many to deal with.  I still call that year my “season from hell”), I decided to upgrade to an incubator that both heats and cools so I could keep it in the main part of my house.  At this time a variety of mini-fridge style incubators were coming on the market.  They all looked alike because they were built using the same mini-fridge shell.  Each manufacturer claimed to have designed the inner workings themselves to be most effective and efficient.  Since I wasn’t party to the inner workings, I had no idea to what extent these identical mini-fridges by different manufacturers actually differed from each other.  I decided on the Reptipro5000 which was produced by Reptipro. (Note that the Reptipro5000 has been succeeded by the Reptipro6000 with which I am not familiar.)

The Reptipro5000, which cost me approximately $175 at the time, looked much nicer than the old Hobovator.  It was much easier to see the eggs due to the large front window.  It had a light to make it easier to see the eggs. Another advantage is that it was easier to use the incubation method where the eggs are suspended over the substrate (I use the SIM), which can be problematic with the Hobovator. Best of all, it both heated and cooled so I could keep it in the living room.  Gecko Time was enthralled enough by it to run a contest with the prize being a Reptipro5000 which the manufacturers donated.

I used the Reptipro5000 exclusively for the next 5 years.  Though I haven’t formally compiled all my information about hatch results, my impression is that I had a similar hatch rate with the Reptipro as I did with the Hobovator.  I also feel that I had a slightly higher incidence of hatchlings with deformities.  This may be due, however, to the fact that I was averaging higher numbers of hatchlings with a greater variety of breeders.

My biggest problem with the Reptipro5000 once again revolved around the temperature fluctuations in my living room.  I had thought that with this new cooling function, if the ambient temperature in the living room got too high, the cooling function would immediately kick in and work to maintain a steady temperature.  In reality, the Reptipro did not seem to handle large ambient temperature fluctuations well on its own.  Here is a lightly edited quote from a post I made on GeckoForums in June 2010, which explains the problem:

Last week the temperature outside went up into the mid 90’s and the temp in the house wasn’t far behind. After 3 months . . .  suddenly the incubator decided to start reading 88 (instead of 86) in the readout and the temp inside the SIM was 86 [instead of 82]! Once I turned the programming down from 88 to 86, the cooling kicked in, the readout stabilized at 86 and the SIM temp went back to 84 or so. This wasn’t something that just happened for a few hours and then settled down; it went on for quite awhile. . . . it was an issue of the cooling tendency seeming to have different standards than the heating tendency.
What it comes down to is that I have to keep more of an eye on the incubator than I was hoping as the ambient temperature changes. As I have mentioned before in other posts, I’d love to have an incubator with a temperature sensor that could be placed inside the egg container and consequently would have only 1 temperature which would be an accurate reading of the programmed temp, the readout temp and the temp inside the egg container.

The 2014 season required an increased vigilance with the incubator due to the fluctuating ambient temperatures of the New England summer.  I felt that I hatched more geckos than before with deformities and, though I couldn’t conclusively say that this was due to a greater temperature fluctuation than usual, I resigned myself to being even more careful with the Reptipro. Then, a chance perusal of the FaunaClassified ads resulted in an unanticipated big purchase . . . 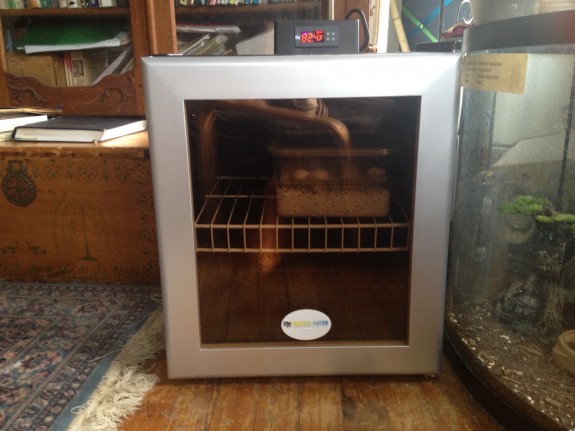 The Thermo-Bator, designed and produced by DVM Exotics is described in their FaunaClassified ad like this:

Brand New Thermoelectric Incubators that both heat and cool as needed to accurately maintain the temperature of your eggs.
The incubator is powered and controlled by an accurate thermostat that measures and can be set down to 0.1 degrees with a differential setting that you control for when the temperature reaches as little as 0.1 degrees out of your set range (we can guide you to the best setting for this parameter) to turn on the heating/cooling unit.
A circulating fan turns on to keep the temperature evenly distributed throughout the chamber.
The thermostat can also be set to a high and low alarm to how many degrees you want it so if the temperature is outside the set temp by that range an audible alarm will go off to alert you.
The settings will maintain if power is lost so no need to worry in those situations.

I was especially intrigued by the ability to set the thermostat to the tenth of a degree and the audible alarm.  Even if this incubator was no better than the Reptipto, at least the alarm would provide some “backup” if the same temperature fluctuation occurred. When I found out that the incubator also comes with a probe that can be placed anywhere, I was sold!

The incubator, which arrived in early January, is currently “cooking” my first 6 eggs (I still have a Reptipro5000 set for 75F which I’m using for gargoyle eggs).  It’s obviously too early in the season yet to know how things will turn out.  So far the digital readout, after I programmed the parameters, ranges consistently from 82.5-83.3F.  With this range, interestingly enough, the temperature inside the egg container, as measured with a digital thermometer and probe, remained rock solid at 82.6.  The moveable thermostat probe is lying on the incubator shelf next to the egg box.

When I set up the incubator, I figured initially that if the temperature in the egg container stayed so steady with the probe on the shelf, it would work even better with the thermostat probe inside the egg box.  This turned out not to be the case to my surprise.  Although my husband and I were able to work out the answer in a general way, I continued to be curious about the science behind this fact.  I was so curious, that I sent the problem to my son, an undergraduate majoring in mechanical engineering.  The response I got was a 5-page paper complete with charts and graphs.  It was so  complete, yet readable, that you should plan to look for that article next week in Gecko Time.

It will be interesting to see, as the season progresses, whether this incubator will provide me with different results than the previous incubators, or whether it will primarily give me peace of mind. I anticipate making a follow-up report at the end of the breeding season.