Do you know how your incubator works?  Does it matter?  In the case where there’s a choice about where to put the thermostat probe, it can matter a whole lot:

My incubator measures approximately 24″x24″x24″.  It has a digital thermostat with a probe inside the incubator that I can put anywhere in the incubator I want.  It has a setting that tells it to turn on or off when it gets to be more than 0.5 degrees F above or below the set temperature of 82.5.

Inside the incubator I have a sealed plastic egg container measuring approx. 4″x6″x6″ with a moist interior that maintains high humidity.

Here’s my question:  When I put the thermostat probe inside the egg box, I would expect that the temperature would remain even steadier, however, the temperature fluctuates more widely and takes longer to change.  Why is that?

Compare fig B-­‐1 with fig A-­‐1. Since you have to wait for the temperature of the egg box to hit 82.5 degrees, the temp of the incubator air in B-­‐1 is higher than that in A-­‐ 1. Both of these figures represent the point in time when the heating element is shut off. As described before, once the heating element is shut off, the air in the incubator will still increase in temperature. Once the rate of heat loss by the incubator air is equal to the rate of heat gained by the air, you will have something that looks like this: 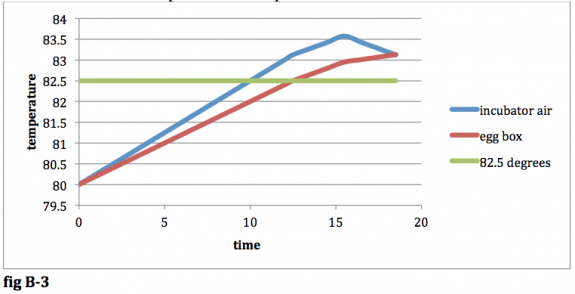 In the long run, the temps will oscillate just as they did before, but the amplitude of the oscillation will be greater for both the egg box and the incubator air:

If the probe needs to be in the egg box for some reason, then you could control the temperature more accurately by reducing the amount of insulation, or by decreasing the amount of mass in the egg box by decreasing volume or humidity. If the probe is outside of the egg box for your application (constant temp desired), it makes sense to have a high mass and a high level of insulation in the egg box so that the egg box temp will not fluctuate as much with the temp of the air in the incubator. For an application where you want the temperature to be changing with respect to time (say you want to use your incubator to simulate how the temperature outside changes over the course of a day), then you may want to have low mass and low insulation in your egg box.

Note: these graphs were made in excel. Nicer looking ones could be made with better software.

Ziv completed a Master of Science degree mechanical engineering at Lehigh University in Bethlehem, PA in 2017. He currently works for Ingersoll Rand. As a son of gecko breeder Aliza Arzt, Ziv has seen many geckos come and go, and has also developed a keen eye for spotting stray crickets in the house.