The term ‘micro gecko’ can refer to members of the genus Tropiocolotes. The two species that I keep are Tropiocolotes tripolitanus and T. steudneri. These are a couple of the most common species of micro geckos available in the industry. Many are imported as wild caught adults, however small numbers of captive bred young are produced each year.

I first discovered these geckos while trawling online, and although they appealed to me, they were difficult to find. A few years later my partner found some from an import and bought them as a surprise for my birthday, knowing that anything small and gecko-esque would go down a treat. Now, a few years later, I have gone from the original group of 7 micro geckos to 14. As you may be able to tell from the population boom, these are definitely one of my favourite species.

The geckos themselves are miniscule, with a body length of a couple of inches including tail. Species can often be distinguished by their body and tail patterns, and different head structures although they are mis-identified by importers and mis-labelled by shops – T. tripolitanus have a speckled sandy brown body with a comparatively long tail with a white tip, compared to T. steudneri which in general appear to have a stockier body and shorter tail with larger spots covering their body. Although small in size these geckos have quite a large character (and appetite!). Despite the vast majority of adults being wild caught, they can be quite calm and confident animals, feeding in plain sight and running over when the tank doors open. Some individuals will tolerate small amounts of handling (although they are prone to taking random leaps of faith off surfaces), I have found that the stockier T. steudneri are calmer and less flighty.

These are often imported in large numbers and species mis-labelled. Although I’ve found that the husbandry is the same for these two micro gecko species, it is always best to know which species you’re getting yourself into.

Most you will find are wild caught and often in poor condition. I have found these to be remarkably hardy animals which recover well. If getting wild caught animals, they will probably require rehydration, feeding up and privacy. Females will often be gravid (some heavily).  While I would not recommend opting for heavily gravid females due to the stress of moving, you may need to prepare for eggs regardless if you are buying females. Most will have been mated and eggs should be expected within several weeks.

While these geckos are tiny, they are incredibly active and are one of the few species that I believe do much better in large groups. For this reason, and the fact that they enjoy hot temperatures, a large terrarium should be provided with both height and floor space. Personally I have found glass terrariums to work well with this species, heating through a mesh lid which allows the heat to escape, this keeps the floor of the terrarium cool and the upper levels hotter. Both species are big lovers of heat; the hottest spot I provide in the tank is in the neighborhood of 45c. I have kept this species with simply a heat mat, and I often see this method recommended as a sole heat source. Although a heat mat appears sufficient in keeping the geckos alive and breeding, there is a huge difference in my geckos from when they were kept on a heat mat to now that they are kept with overhead heating – they are now much chunkier, more active and have larger calcium sacs (which I have put down to an increased appetite). This in turn has resulted  in them laying much healthier and better calcified eggs. As I strive to recreate their natural environment within their enclosure, I also provide a good source of UVB – although this is not considered necessary.

From experience I have found that they benefit from regular misting. I mist all my ‘desert’ species to replicate the dew in the morning and I have seen the geckos actively licking the droplets off the rocks in their enclosure. 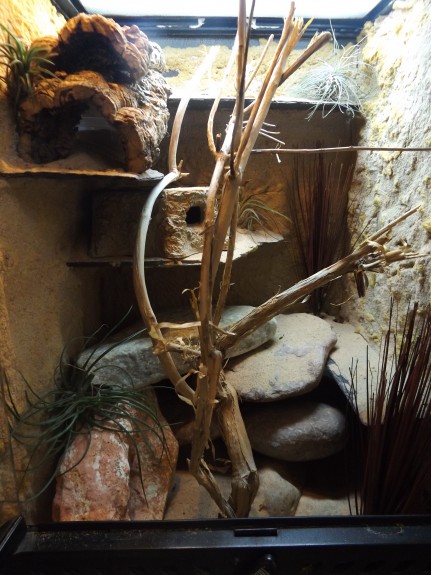 As I’ve mentioned previously, these guys are massive eaters and seem to have a very fast metabolism for reptiles. I feed them little and often, mostly on fruit flies and small crickets – although they won’t bat an eyelid at prey bigger than their head, I tend to feed slightly smaller prey which get dusted with vitamin powder every few feeds. These are ones to watch hunting!

If you sit and watch these geckos, you will see a lot of interesting body language – a lot of this is through their posture and their tails. An upright, straight legged posture appears to relate to dominance – this cannot be avoided when housing animals in groups, as there will always be dominant and submissive individuals. Submissive animals tend to move slowly with their bodies quite low to the ground. That is until you put food in the tank, then hierarchy seems to go out the window! Tail movements are frequently seen by both sexes, and appear to occur when an animal is nervous (either from my presence or a dominant animal). The waving tail is often followed by a quick dash for cover. I believe this expressive body language is why there appears to be no physical aggression among group members.

Another great little quirk of Tropiocolotes is that multiple males kept together actually seem to benefit the group. The presence of other males within the group encourages successful mating. When I had one male to several females there was little to no egg laying from the females – now with three males the number of viable eggs has increased dramatically and I now have an incubator full! You can often hear the males calling at night (either to attract the ladies or mark their territory), but I have never seen any evidence of physical fighting and neither have the other keepers I have talked to.

Females lay one egg every few weeks, with no cycling required. The single egg is quite large for the size of the gecko and can quite easily be seen through the belly of the female prior to laying. Females lay in the sand which can either be kept dry or slightly damp. I tend to remove these eggs as other females have a tendency to dig them up when laying their own. The eggs are incubated at around 28c and hatch after a few months. I’m not aware of whether this species is temperature-dependent.

I currently keep both species in the same enclosure and from my observations I do not believe these two species can hybridise. I only have male T. steudneri and in the time of the two species cohabiting none of the T. tripolitanus females have laid.

I’ve found the best way to raise the babies are to keep them with the parents with exactly the same care. From my experience, raising hatchlings on heat mats and away from their own kind results in weak babies who often do not survive. 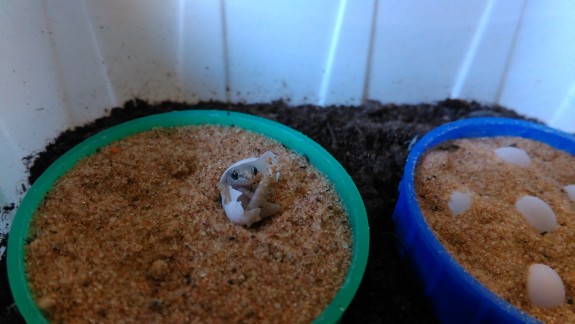 These are quite a strange species, as I have found them to be constantly active and hunting. From what I’ve seen I couldn’t definitively say they were one or the other. They do seem to make good use of a basking site, though! 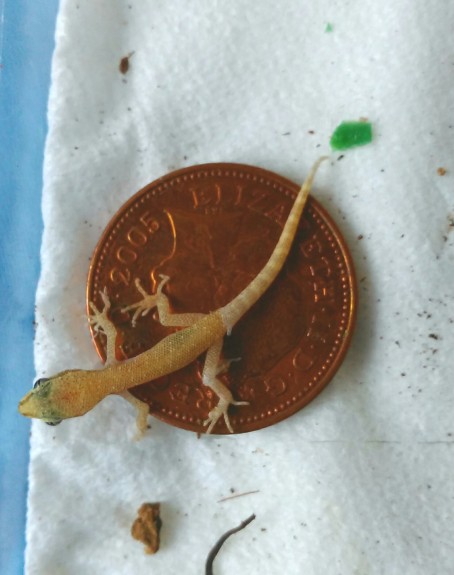 Vickie works full time as a stockbroker, although her main passion is animals. She started keeping reptiles while at University where she studied zoo biology, and has gone on to keep and breed a number of gecko and skink species. Her favourites are small and unusual species.