Over the years, I have worked with a number of terrestrial gecko species. My favorite of these is the helmeted gecko of Northern Africa. They have a very unique look and make up for their small size with a big personality. Until recently these geckos have been labeled as Geckonia chazalia, but they have recently been reclassified as Tarentola chazalia. They get their common name, “helmeted gecko”, from a row of enlarged scales lining the back of the head. This gives the shape and appearance of a “helmet”.

This species is a small, but sturdily built gecko. Adults are 3” – 4” in length with relatively short tails. The males are noticeably smaller than the females. I have kept this species for several years and enjoy them immensely. These little geckos show little fear of humans. Mine quickly learn to associate my presence with food. When I enter the room, they come to the front of the tanks and pace back and forth, waiting for handouts. They will readily take food from tongs, or even from my fingers. They tolerate gentle handling quite well, but must be handled with care due to their small size. I also find them to be very vocal geckos, with lots of quiet little “chirps” and “grunts” whenever they are active. Their helmeted heads may appear to give them a constantly angry or stern expression, but they are really an easy going and entertaining gecko. 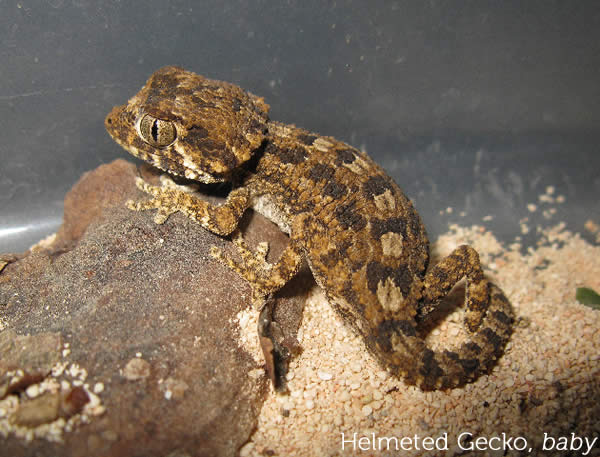 Helmeted geckos are naturally found in a fairly narrow strip along the Northwest coast of Africa, primarily in the arid, rocky deserts of Morocco. In their native habitat, these geckos are usually found under rocks or other debris during the day, which creates a slightly cooler and moister microclimate. Rainfall is quite rare in their range, but the areas where these geckos are found commonly receive heavy fogs, which roll in off the Atlantic Ocean. This is the primary source of moisture for creatures living in these coastal deserts.

These are hardy little geckos that will thrive if given the proper care. Like most geckos, they require a temperature gradient, which allows them to choose a location with a temperature to their liking. I use an undertank heater, which creates a warm end of approximately 85º – 90ºF during the day. The cool end of the cage ranges from 75º – 80º. I allow a nighttime drop in temperature, as well as allowing a winter cooling period for my adult breeders. A 10 gallon tank can easily house a pair or a trio of these small geckos. They will actively explore their habitat, so a variety of rocks and branches will be well utilized. I have witnessed little or no aggression among members of this species, although I have never tried to keep more than one male in an enclosure. I use a substrate of sand for adults and paper towel for new hatchlings. Some keepers have reported that UV light may be beneficial for this species, especially for babies. I have raised all of my animals without UV and have had no problems. Some sources also claim that helmeted geckos are strictly terrestrial and cannot climb glass. I have not found this to be true, as I have found my geckos on the glass walls of their tanks on numerous occasions. For this reason, it is best to have a secure lid on your animal’s cage.

When I first acquired this species I was told that hydration was the key to successfully keeping them, and I have found this to be true. Even though they come from a harsh desert environment, the moist fog, which is a regular occurrence in their habitat, creates a more humid condition than one might at first think. I give my helmeted geckos a light misting daily, and give the cool end of their enclosure a heavier misting approximately once a week so that the lower layers of the substrate retain some moisture. However, you do not want these geckos in a constantly moist environment, so good air circulation is important. 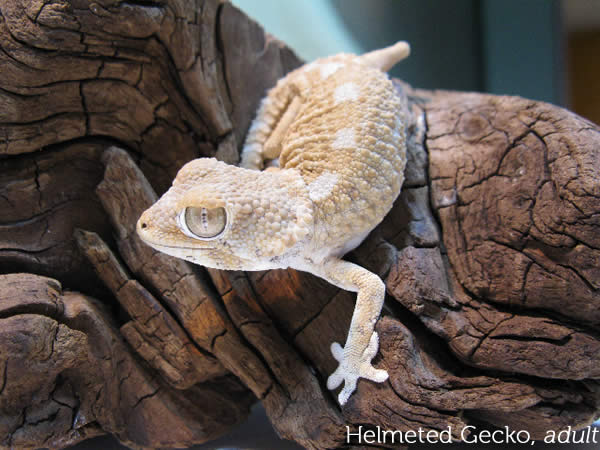 These geckos are active and aggressive feeders. I am often surprised by how much they eat for their size in comparison to some of my other geckos. They aggressively chase and consume prey as soon as it is placed in their tank. I feed them roaches, crickets, and mealworms. I dust insects at every feeding with Repashy Calcium Plus. It is also important that breeding females are offered food often and have access to extra calcium as they may have health problems if they aren’t fed and supplemented properly during this stressful time.

I have found my females to be prolific egg layers. Even before I had any males to go with my 3 females, they began to lay eggs like clockwork. Once a male was added to the group in 2008, I began to get eggs that were fertile. Early on, I had some issues with incubation and had a number of eggs that went bad late in the developmental process, as well as a couple of newborn hatchlings that failed to thrive and died soon after hatching. I made some changes to my incubation methods, and late in the season had some success in producing my first CB babies. The babies are small, but robust, and grow quite quickly. My adult breeding groups now consist of 2 males and 3 females arranged to produce two lines of unrelated offspring. I have eggs in the incubator and have high hopes of producing more offspring in 2009.

Once quite common in the pet trade, these geckos have become much harder to find. A few breeders are successfully reproducing this species, but others have found them challenging to reproduce. If you are lucky enough to find some of these unique and personable geckos, I’m sure you will thoroughly enjoy these easy going, and interesting geckos as much as I enjoy mine. They are truly unique in both appearance and personality.

Gary Hamann of Ridge and Valley Reptiles has been involved with reptiles nearly his whole life. He became actively involved in breeding reptiles 15 years ago and began specializing in geckos about 5 years ago. Helmeted geckos are one of the favorite species he works with. More information can be found at his website www.ridgeandvalleyreptiles.com.