Leopard and African fat-tailed geckos are among the most popular reptilian pets. Many of us enjoy the comical antics of our winking friends, but as we become more familiar with eyelid geckos and their interesting behavior we realize how little we actually know about them.

Where do they come from? How many kinds of eyelid geckos are there? Why can they blink when other geckos can’t? As their name implies, eyelid geckos are the only geckos in the world that retain movable eyelids. Mostly ground dwelling in nature, these lizards lack the specialized toe pads found in other geckos. The combination of movable eyelids, terrestrial habits, unspecialized feet, and a variety of other skeletal characteristics mark eyelid geckos as among the most primitive geckos in the world. In addition, although eyelid geckos are found around the globe, species remain remarkably similar to one another in form and habit, further suggesting that they are an old group and that remaining species are but twigs of a very ancient and highly branched family tree. Scientists are still struggling with eyelid gecko taxonomy. 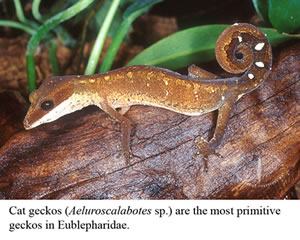 Historically, eyelid geckos were first recognized as their own family, Eublepharidae, in 1885, but were reduced to subfamily status within Gekkonidae in 1901. In 1912, eyelid geckos were once again given their own family, only to be placed back into Gekkonidae in 1923! It wasn’t until 1988 that eyelid geckos were comfortably assigned to their own family again, but the group continues to confuse scientists. Eyelid geckos can be found in North and Central America, Africa, India, Central Asia, Borneo, Malaysia, the Ryukyu Islands near Japan, Hainan Island, China, and Vietnam. They are represented by six genera and 23 species, which is the fewest species of any of the four gecko taxonomic families. The most diverse family by comparison, Gekkonidae (of which the infamous tokay gecko is a member), has 930 species. Eyelid geckos include 3 species in Aeluroscalabotes (cat geckos), 6 in Coleonyx (North American banded geckos), 8 in Eublepharis (leopard geckos), 2 in Hemitheconyx (African fat-tailed geckos), 2 in Holodactylus (African clawed geckos), and 2 in Goniurosaurus (cave geckos). Of the six genera, the cat geckos (Aeluroscalabotes) are considered the most ancient, and are most closely related to the common ancestor that spawned all genera within the eyelid gecko family. Cat geckos are the only Eublepharids to have slightly webbed feet, no banded color pattern, a prehensile tail, and hatchlings with a brightly colored tail tip, all of which are considered primitive traits. Because of these differences, cat geckos are actually assigned their own subfamily, Aeluroscalabotinae, while all other eyelid geckos are contained within the subfamily Eublepharinae. 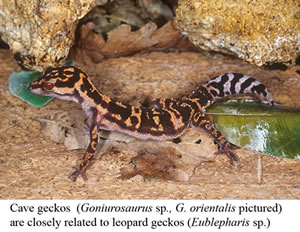 Within Eublepharinae, the oldest, most primitive genera are the North American banded geckos, followed by cave geckos, leopard geckos, African fat-tailed geckos, and African clawed geckos. Eyelid geckos are like a slice of natural history, giving us a snapshot of what Earth’s earliest geckos may have looked and acted. As we watch our pet geckos stalk their insect prey with rapt attention, it is fun to reflect that the earliest geckos may have hunted in the same fashion. The eyelid geckos are an amazing and interesting group that continues to spur curiosity among hobbyists and scientists alike.

Vanessa Lane is a PhD student in forestry at the University of Georgia.
Although she primarily works with birds in her professional career,
reptiles and amphibians were her original love. She began breeding
leopard geckos in 1999 and has since acquired a fascination with the
eyelid gecko group.