One for the money

Two for the show

Introducing our new monthly Gecko Time  feature — Three to Get Ready.  Every month, a different herp species will be profiled by three experienced keepers.  While a detailed caresheet is always useful, individuals’ personal experiences and their delight in working with a particular species can do even more to convey what it’s really like to care for them.  It can also motivate others to take on a new type of gecko.

Each contributor was asked to respond to the following questions:

This month’s article profiles the genus Coleonyx and some of its species.  We would love to receive any suggestions about gecko species for future articles. Send those over via our contact form.

After succesfully keeping and breeding E. macularius (leopard geckos) for several years, I decided to get some other eublepharid species. I was trying to get C. variegatus, which looks similar to leoprd geckos in appearance and demands but is more slender and “elegant”. Unfortunately, I found this species to be very rare and hard to get in my region (Slovakia, Czech Republic) at that time. The only Coleonyx species easy to get in my region are C. mitratus and C. elegans. So I decided to buy C. elegans, which also got my attention because of nice colors and “varanid-like” appearance. I got my first 2 babies of C. elegans in 2008 from a Czech breeder. These grew up to be 2 males, unfortunately. So later (in 2009) I obtained from another breeder an adult pair and at that same season I got also my first babies. I found this species to be quite prolific and easy to raise.

My Coleonyx geckos are of 2 different ecological types:

C. elegans and C. mitratus need more humid conditions; I have them on coconut-substrate (“Lignocel”), which I keep slightly humid by spraying the enclosures every one-two days.  Hiding places are made of coconut-shells, wood, ceramic flower-pots or plastic boxes covered with lids (hole cut in the lid for entrance). I keep these species at temperatures of 20 – 28°C (68 – 84°F) (depending on time of the year, either room temperature with no additional heating, or heating from a 25 W light bulb 10 – 12 hours a day).

B) C. variegatus and C. brevis are desert species, but they also like to have some moist hiding place. I have them on mixture of fine  sand and river gravel (size of grains approximately 2-5 mm). Hiding places are similar to that mentioned previously, but I put also some flat rocks, under which the geckos like to dig their resting places. The rocks are safe from collapsing. For a moist hide, I use plastic box or ceramic flower-pot covered with flat stone, filled with coconut-substrate (“Lignocel”) – this is used also for laying eggs.  I spray one corner of the enclosures 1-2 times a week. For most of the year I keep these species at temperatures of 22 – 34 °C  (72 – 92°F). The heating (12 hours a day) is achieved by heat pads put under 1/2 or 1/3 of the enclosure bottom. For about 8 weeks in winter I turn off the heating entirely and let the animals rest at temperatures of about 17 – 19°C (63 – 66 °F) without feeding.

Of course, in each enclosure I put a shallow dish with water. Also, in most enclosures I put a dish with powdered calcium which C. variegatus in particular like to eat.

Some people have bad experience with coconut-substrate (“Lignocel”). It is said that it can cause impaction when swallowed by the animal. So far, I had no such case in my geckos. When introducing this substrate on the bottom of enclosure or into the laying/hiding box, I usually  push the surface with fingers, so it becomes somewhat flat and smooth.  Some of my geckos (especially C. variegatus and C. elegans) are also used to eating from tweezers, which lowers the possibility of swallowing some substrate accidentally while catching prey.

On the other hand, I had bad experience with dried Sphagnum moss, which is sometimes used also as a substrate. I tried it for moist hiding places. One of my C. variegatus died from impaction and other one had also problems with this, but somehow managed to vomit this out and survived. I think the geckos swallowed some sphagnum fibers accidentally during skin shedding.

There are several things I find interesting about Coleonyx geckos. At first, I consider their appearance and movements nice and elegant, mainly when compared to most other eublepharid species. Also, their colors are nice and it is always interesting to watch the color change as the gecko grows from juvenile into adult. I also like their tolerance for each other: they usually don´t fight, share the same resting places and especially C. variegatus don´t have problems with introducing new members into the group (of course, I don´t force 2 adult Coleonyx males to live together).

One of my favourite reptiles are varanids (monitor lizards), but so far I have no adequate space conditions and finances available for keeping some of them. Especially C. elegans (but also C. mitratus) serve as a  substitude for them, as I find their appearence and some behaviour elements similar to varanids.

The biggest challenge in my breeding Coleonyx species has been finding the right incubation temperature for the eggs. Especially the percentage of succesful hatching of C.variegatus was at first only about 50 – 60 %, and all hatched geckos were females. I kept these at fluctuating temperatures between  24° – 32°C (76°F-90°F) and I think the main problem was the high temperature. Many babies died in eggs half- or almost fully developed. Then I changed the temperatures to more stable conditions of  27- 29°C (80-84°F) and the embryo mortality decreased rapidly. Also both sexes came out in ratio of  1:1.

I am working with Western Banded Geckos (Coleonyx variegatus sp.)  These tiny desert jewels are native to the Southwestern deserts of the USA, and can be found hiding under debris during the day or scurrying across roads with their tails arched up over their backs to mimic scorpions after dark.

I first became interested in Banded Geckos after reading about them in “The Eyelash Geckos” by Andreas Kirschner, Hermann Seufer, Yuri Kaverkin.  A good friend of mine was working as an Environmental Scientist at the Kofa National Wildlife Refuge in Western Arizona just South of Quartzite and East of Blythe, CA across the state border, and collected several for me as a surprise gift.  He kept them in his Playmate lunch box along with some of the native soil they were found in.

Since Banded Geckos are aggregate and found in small colonies, I house mine together in a 10-gal short glass breeder tank with a screened lid on a pea gravel substrate with artificial succulents, rocks, driftwood, natural looking cave hides, and a water bowl. I use a 10-gal under tank heater to keep the warm side at about 92-94 degrees F. 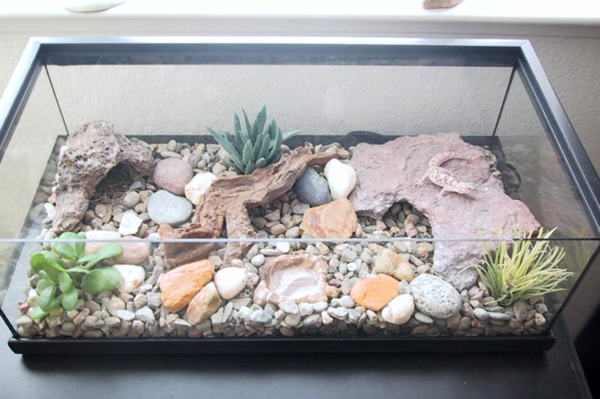 Banded Geckos are like miniature leopard geckos, and their feline behavior is fun to watch… especially when they stalk their prey. They are voracious eaters, and mine will even take small, hand-fed mealworms right from my fingers. Although not as prolific as Leopard Geckos, they breed well in captivity. These little geckos are quite vocal, and will squeal in a high-pitch as they dart around.  Watching my Banded Geckos interact with each other is always entertaining!

The biggest challenge working with Banded Geckos is their size, especially babies.  Adults are just a little over 3 inches snout to tail tip, while hatchlings can be only an inch or so long.  Handling hatchlings is challenging, as is finding insect prey small enough for them.  Banded Geckos tend to be skittish, especially wild-caught specimens, and they drop their tails easily if they are threatened.  Another challenge is losing eggs during incubation, but seeing a newly hatched baby makes it all worthwhile!

About 5 years ago I saw a picture of Marcia McGuinnes’ (Golden Gate Geckos – see above) Coleonyx on geckoforums.net and I was immediately taken with their smooth skin and bright yellow coloring.  Soon after, someone local offered me a pair and a juvi she had gotten from Marcia.  Despite the warning that the juvi was seriously ill, I acquired the 3 of them.  The juvi didn’t survive but the pair bred and produced about 9 offspring. 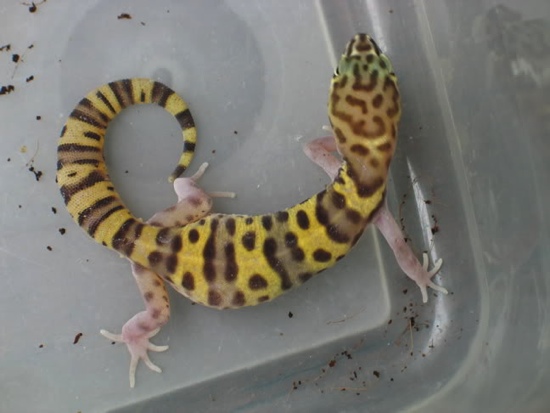 Currently I keep the adult Coleonyx in a front-opening enclosure with the floor space of a 15 gallon tank, though half the height.  The substrate is ceramic tile, but I have a shallow tray that covers about 1/4 of the enclosure with coco-fiber substrate and some hides on top of that.  There’s also a piece of cork bark for them to hide under and a covered bathroom area.  They seem to make use of the entire enclosure and can be very active.

Maybe it’s because of their size, but I find them much more active and curious than leopard geckos, the type of gecko they seem to resemble the most.  They attack their food with gusto and often greet me or other Coleonyx with a slowly waving tail.  I was lucky enough to acquire a male that has white coloring instead of the yellow coloring of most other Coleonyx and he’s produced a number of white and brown offspring.  The variety in coloration is more subtle than with leopard geckos, but once I tuned into it, it’s really interesting to see how the babies’ colors develop.

I have had a hard time keeping these guys alive.  For several years there seemed to be some kind of plague going on where the entire colony would stop eating, start to lose weight and waste away.  I had one female drop her tail for no reason and then start to waste away.  My current theory (and it’s just a theory) is that the original sick juvi transmitted something to the others that took a while to manifest itself.  No other gecko species in my household ever demonstrated these symptoms.  To be sure, I treated all the enclosures and furniture the Coleonyx had used with ammonia as if I were disinfecting for Cryptosporidiosis and started again.  I’ve had my current pair for 2 years with no health problems.  They produced 5 babies during the summer of 2011 and then for some reason got busy again in October.  The first of the “new” season were born on Christmas Day 2011.  I have produced 15 this season with at least 2 more eggs in the incubator.

Viliam Vongrej is 32 years old and lives in Slovakia (central Europe). He has been interested in nature since his childhood. During the years 1999 – 2007 he studied at the Comenius University in Bratislava (capital of Slovakia), at the Faculty of Natural Sciences. During these years he started keeping reptiles, mostly geckos. He got his first reptile (Eublepharis macularius) in 2002.