Crested geckos have gained in popularity with the reptile community due to their ease of care, their handle-ability, unique features, and ease of breeding. This species was once considered genetically unpredictable: babies could hatch out looking nothing like the parents, or look nearly identical to them. And for some that was half of the fun, never knowing what would hatch. But for some of us it was frustrating in the beginning, trying to understand why two geckos that looked so similar would produce so many offspring that looked entirely different from the parents.

Crested geckos’ are “polymorphic”, meaning that they  have the ability to carry many traits at once. Although what you are looking at are various sets of traits rather than a morph, a morph is a set of traits specifically bred to produce a particular design. The problem with crested geckos is they can exhibit so many traits at once and you can end up with combinations such as  flame tigers, flame brindles, and even harlequin pinstripes. Flames, tigers, and harlequins were once thought of as distinct morphs but because of their ability as stated to be able to visually express multiple “morphs” at once, these really are traits that are being expressed. 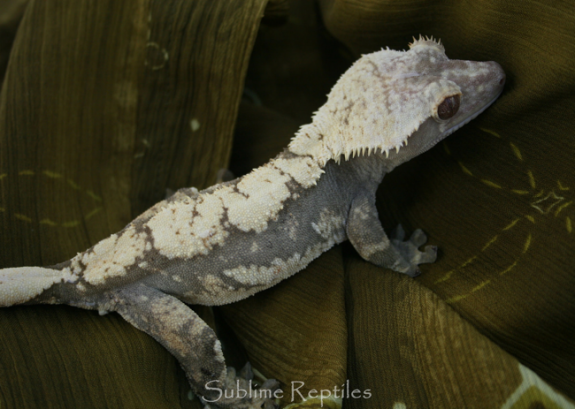 So how does that play into today’s breeding? More and more people are becoming specific in what they are attempting to breed for color and trait,  making breeding more predictable now than it was before. Although not as clear cut as dominant/recessive alleles in other species like leopard geckos, it is becoming clear that crested geckos are not just a shot in the dark when breeding, and that there is some reasoning as to why there is an increase of predictability in what is produced. This is mainly due to people line breeding/selective breeding (not to be confused with inbreeding). Line breeding/selective breeding is taking animals with like traits or colors and breeding them together. Over time this allows for the traits and colors to become stronger in the line and the offspring more easily predicted. Although many would consider this to then be a dominant trait, it is simply line breeding/ selective breeding of a specific trait that is causing the likelihood of that trait or color to prevail.

So what does that mean? Essentially if what you are trying to produce is a specific look, start there. Animals that share a particular trait are more likely to produce animals that exhibit that trait as well. But this is where selective breeding comes into play. Let’s say you want to produce light colored harlequins, you have a light colored harlequin and a standard harlequin (medium brown and yellowish pattern). You have no known lineage for either gecko…you really do have a random pairing and you will receive random offspring. Yes you may get a yellow gecko or two, but there is no real predictability. So now let’s say you invest in two yellow harlequins because you want better odds. Well your odds theoretically would be better with two geckos that both exhibit the desired trait.

However if their genetic backgrounds are unknown, your outcome predictability is still likely to be somewhat reduced. 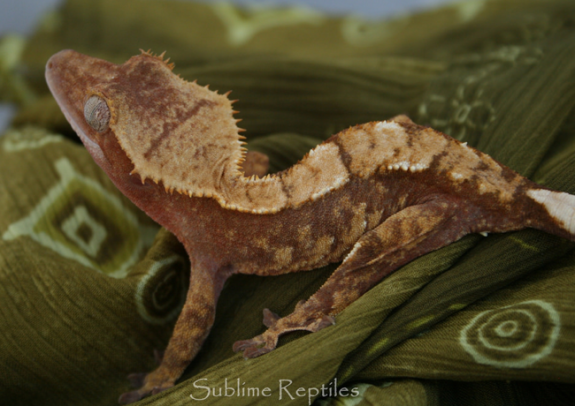 Now it isn’t to say you wouldn’t begin to see a pattern with either of those breeding combinations. You may notice that in your first pairing the dark gecko’s colors were basically overridden by the light gecko’s and your outcome was light colored geckos, maybe not the exact color you wanted, but there was a pattern developing there. You may have noticed that the complete opposite happened with the geckos that were similar to each other in color: you ended up with all dark geckos. Believe me, I have been there before and this is exactly how it started out with me. It all boiled down to the lines the geckos came from. This is where selective breeding has really come into play. Knowing the expressed traits and colors of the parents of your geckos plays a vital role is having a general idea of what you will produce. The farther back the desired traits and colors go, the higher probability it will be expressed. So if granpappy and grannie were light based harlequins, the dam and sire to your pair are also light based animals, the result should be a majority of light based animals.

And this can be expanded on more than just colors/traits; it can be expressed physically in body structure. Through selective breeding we are now seeing crowned animals (animals with large, arrow shaped heads with long thick crests), snout length (some short while others longer), and also body size (people breeding for massive geckos).

Crested gecko genetics are just now starting to unravel but are still not fully understood. But now we have an understanding that  through line breeding we can expect some predictability as to what may hatch. With careful selection of your breeders you can begin to see a pattern in the geckos you produce and achieve predictability on what you will produce.

Melissa Walker is the owner of Sublime Reptiles in Toledo, Ohio. She has been working with reptiles since 1998, keeping various species over the years but her heart lies with geckos, working with crested geckos since 2006. With two biology degrees she has been lucky enough to have the experience of working in pet stores for many years, for exotic vets, and has now landed in the world of research and development lab work.