Phelsuma malamakibo is decribed in Nussbaum,R.A.; C.J. Raxworthy, A.P. Raselimanana, and J.B. Ramanamanjato 2000. New species of day gecko, Phelsuma Gray (Reptilia: Squamata: Gekkonidae), from the Reserve Naturelle Integrale d’Andohahela, South Madagascar. Copeia 2000 (3): 763-770. This gecko is named after the malagasy “muh lam uh kee boo”, which refers to the smooth unkeeled ventral scalation. The holotyp of Phelsuma malamakibo is at the University of Michigan Museum of Zoology, UMMZ 214972. The holotyp can be seen here.

Phelsuma malamakibo reaches a size of about 140mm in total length. It is identified by the presence of a distinct dark lateral stripe on the neck and body with a white lateral stripe below it as well as a second thin dark stripe underneath the white one. The basic dorsal color is greenish with reddish brown spots arranged into three longitudinal rows on the neck and back.The ventral color is filthy-white. Specific characteristics of scales include the median cleft dorsally on the rostral, the centered nostrils above the first supralabial scale, the subequal subcaudal scales, the keeled gular and anterior chest scales such as the smooth, unkeeled ventrals scales on body and tail. (Nussbaum et al., 2000). This species can show a very nice blueish touch all over the body when sitting in bright light.

Phelsuma malamakibo is described from the Andohahela Natural Reserve in southeast Madagascar. It is a rock-dwelling species, which occurs in the primary rainforest at elevations between 800 and 2000m. At this altitude the climate is rather rough. The day temperature can rise up to 35C degrees whereas the night temperatures drop heavily. On cloudy days, the temperature sometimes does not even reaches 10C degrees. The humidity is high throughout the whole year with a drier winter phase. 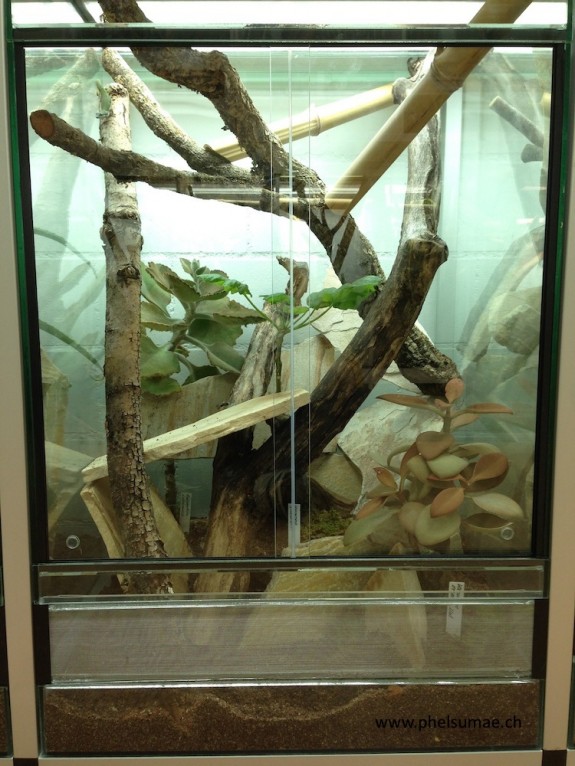 When I got my first Phelsuma malamakibo about five years ago, it was said to be impossible to produce any males when  breeding. Two years later I was lucky to be one of the first people to obtain one of the first males in captivity bred by H.P. Berghof. I then had great success in my first breeding season as I was able to breed a total of 4.3 Phelsuma malamakibo. The second season wasn’t as succesful as the first, but I still had a 1:1 male/female ratio. So it seems that producing males isn’t as impossible as had been thought for a long time. I am now in my third season with this species and due to my breeding success I am able to work with four pairs in total now.

I keep my pairs of Phelsuma malamakibo in terrariums with dimensions of 50cm length x 50cm deep x 80cm high. They have a generous air space in the top, as well as in the front. The enclosures contain a lot of slate stones in combination with branches. I mainly use different Aloe, Uncarina and Kalanchoe species for plantation. Each of them occuring in the Andohahela National Park. This is Aloe vaombe, Aloe bakeri, Uncarina grandidieri, Uncarina roeoesliana, Kalanchoe beharensis and Kalanchoe orgyalis, respectively. I use densely planted terrariums for maintaining the humidity. I spray once a day which causes the humidity to rise above 90%, but then it falls off within a few hours to 50%. Waterlogging should be avoided.

The cages are illuminated with two T5 UV tubes, which extend over several tanks. In addition, a low-voltage halogen spot and a high output LED spot burns for a few hours a day. This allows the enclosure to reach the highest day temperature of 35 ° C  below the halogen spots. In order to conform to the temperatures in the area of their natural habitat, my tanks for Phelsuma malamakibo are in a special room in the basement. There it is possible to let the temperature drop strongly at night. Depending on the season and outdoor temperature the room reaches a temperature of 18 ° C in summer and 5 ° C in cold winter nights. The adults are fed twice a week with small crickets, firebrat (silverfish), waxmoths, superworms or flies. Once a month they get some fruit puree. The food items are always dusted with a vitamin and mineral compound.

Phelsuma malamakibo is a very attractive Phelsuma species, which can get absolutely tame. They can get very curious, that it sometimes makes it very hard cleaning up their terrarium, without getting stalked by them.

However, for a succesful breeding of Phelsuma malamakibo, as for Phelsuma pronki, it is important to provide the animals with a colder and drier winter phase. During this time, from October to March, the lights burn about eight hours a day.  At the end of this period, the illumination time is increased gradually until it reaches about 12 hours in April . As soon as the temperatures rise, the mating season begins. The female can lay up to five clutches in a period of three to four months. It is recommanded to keep this species in pairs, since the females can be very aggressive towards each other when kept in groups. Phelsuma malamakibo is an egg-gluer. Unexpectedly the eggs are exclusively glued on the glass walls of the terrariums and are never found stuck on or between slate stones. It is recommended that the eggs be protected by covering them, because the adults may eat their babies. Depending on the incubation temperature, which can be affected by halogen spots, the babies hatch anywhere from 40 to 80 days later and are approximately 40mm long. The hatchlings must be reared separately in small tanks with dimensions of about  15cm length x 15cm deep x 25cm high. These tanks are illuminated with a T5 UV tube as well.They are fed every two days with micro crickets and small firebrat. Once a month they get  some fruit puree. The food items are always dusted with a vitamin and mineral compound. The juveniles grow relatively rapidly and reach sexual maturity at the age of about one year, though it is better to wait until the female is about 1 1/2 years old before introducing her to a male.

Markus Roesch feels that reptiles have dominated his life since the age of 13. After he was allowed to gain experience with various species of geckos over the years, he today exclusively keeps animals of the genus Phelsuma. Although in some cases he has had up to 150 geckos in his possession, he appreciates both the enormous variation within the genus in terms of its appearance and the individual character of each individual animal. Since he has had great breeding success with his Phelsuma, he has made it his mission, to produce healthy offspring and thereby, to contribute to the sometimes time-consuming education in animal welfare. This is particularly important since many Phelsuma species are strongly threatened in their natural habitat and are preserved primarily by maintaining a stable population in captivity.