As the autumn winds blow, leaves begin to fall and temperatures gradually change. Bright orange pumpkins of all sizes begin to line residential neighborhoods; black and orange decorations fill department stores and shops –all marking the fast-approaching Halloween holiday. (Truthfully, in California there aren’t real seasons: it was in the mid 80’s today in late September!) As I drive swiftly home, pumpkins resting comfortably in apartment windowsills appear as sporadic orange blurs, almost like carrots floating in midair. Arriving in my gecko room, I smile to myself as I carefully slide open a plastic sweater box to reveal a brightly colored orange reptile. At first glance it appears to be a popular lizard in the pet trade: Eublepharis  macularius, commonly known as the “leopard gecko”, but this was not an ordinary specimen. There is little resemblance to its heavily spotted, dull yellow ancestors from the grassland and deserts of Iran, Pakistan, Afghanistan and northwestern India. Instead, it displays an orange colored body, complete with a faint orange dorsal stripe, and an almost entirely orange tail. This special gecko, hatched in an incubator only a few feet away, is the result of careful selective breeding under the finest captive conditions, a personal accomplishment that started over a decade ago — my very own designer carrottail leopard gecko!

As I close my eyes to reflect back to the mid-1990’s, I can still remember the first time I saw a photo of a vibrantly colored leopard gecko with bright orange coloration creeping down its tail. It was exciting, it was truly magnificent, beautiful beyond words — and it was extremely, extremely expensive. Remember that over a decade ago, the designer leopard gecko was still in its infancy in comparison to the current industry. I remember paying $300-$500 each for “hypo” or “yellow hypo” leopard geckos (reduced pattern high yellows) and over $500 for my first “Murphy patternless” leopard geckos in the late 90’s. “Jungle” and “striped” specimens were growing in popularity and becoming affordable, while “tangerine” and “hypo tangerine” leopard geckos were defined by total number of body spots and demanded high prices. At the turn of the century, brand new recessive traits such as the “blizzard” gene and two albino strains, “Rainwater” and “Tremper”, respectively, had just hit the market at $2,000-$3,000 USD per individual gecko! As far as I know, the “classic carrottail” bloodline originated from Ray Hine in the United Kingdom in the late 1990’s. A small handful of dedicated breeders in the United States obtained carrottails from the “Hine” line and began introducing tangerine bloodlines in the hopes of improving overall body coloration and carrottail percentage. The first “Hine” carrottails were nothing like you see now; the majority of the animals were only 20-40% carrottails, with a few VERY expensive individuals having over 50%. I started humbly working with the “Hine” carrottails in 2001. Below is a photo of the best one I produced in 2002.

History of my designer carrottails

The first year I obtained pure “Hine” carrottails, I did “Hine” x tangerine crosses like many other breeders did (the best example that comes to my mind is Albey from “Albey’s Too Cool Reptiles who produces some amazing screamers!). In my opinion, I would say that a large majority of the hypo tangerines you see now have some Ray Hine bloodline in them, although there are many exceptions and independent tangerine/hypo tangerine bloodlines. My own “tangerines” at that time were a jumbled mix of various bloodlines, including Bill Brant tangerines and independent lines from a local friend. All of them had numerous head and body spots, with their body coloration ranging from deep to light orange, and some also had a faint dorsal stripe. I kept breeding the best offspring together and in 2003 I produced a female I named “Cheetos”. 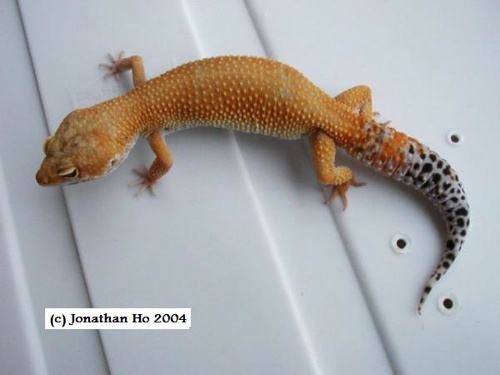 She was the best offspring from my “Hine” x tangerine crosses, exhibiting almost a baldy head and deep orange body coloration that was close to the same coloration as her low percentage carrottail. I continued to selectively breed her offspring until I had a decent group of deep orange colored hypo tangerines. On the other hand, as most of you who have worked with the “Hine” x tangerine crosses know, the offspring can range from exactly like the “Hine” carrottail parent, to the opposite extreme –an average yellow gecko– and individuals exhibiting phenotypes of everything in between. Some of the offspring I produced had a higher percentage of carrottail (30-40%), but didn’t have the hypo body or reduced pattern that I desired. However, I picked a few with the most extensive carrottails and began selectively breeding their offspring.

I had two separate “projects” simultaneously branching and occasionally I would breed individual geckos from the separate groups together producing mixed results. Some of the animals would exhibit desirable phenotypic traits from both groups, while others were completely lacking. This was important not only for genetic diversity, but also a good indicator to see if certain traits were being passed on to the next generation of offspring. Eventually I had to downsize my leopard gecko collection to make way for other species and I picked a handful of my best hypo tangerines, carrottails, and favorites I wanted to keep. Around that same time, the “red stripe” morph hit the market and took the leopard gecko community by storm. Red stripes were beautiful striped or jungle geckos with tangerine body coloration and varying amounts of carrottail. I really liked their look and also wanted to add new bloodlines into my colonies, so I added a few red stripe x striped/jungle cross offspring, as well as a few select patternless striped geckos to my colonies. I did several generations of hypo tangerine/carrottail x stripe/patternless stripe, producing offspring that showed different phenotypic traits.  Some of these offspring I bred back to each other, and to their parents to further increase the likelihood of the desirable trait I wanted: carrottail! The offspring from these crosses exhibited a huge variation in number of body spots, body coloration, banded/jungle/stripe pattern, and carrottail percentage. 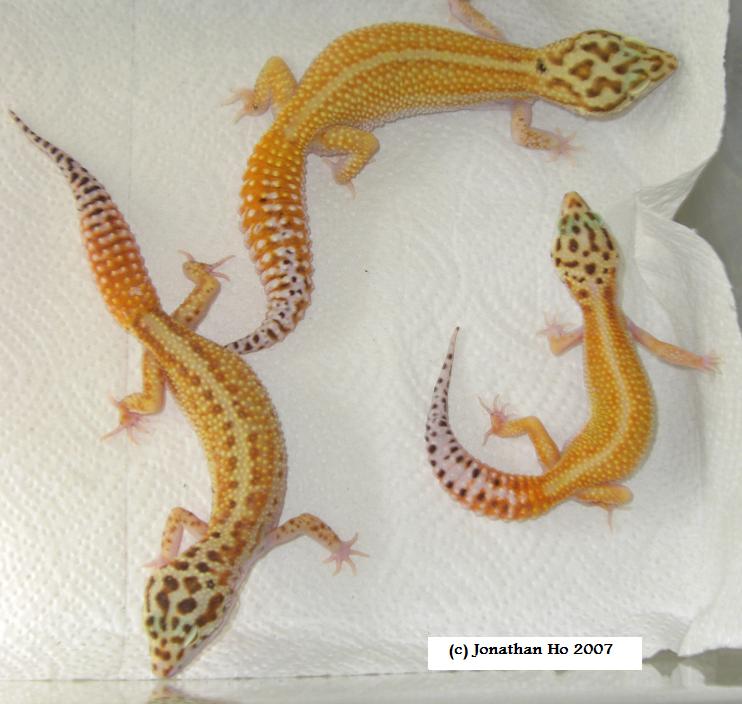 At some point (I believe it was 2006), “average” looking black eyed eclipse geckos randomly popped out of my breedings (at that time, knowledge about the patternless stripe gene being linked to the recessive eclipse gene was unknown) so I kept them back to test breed to their parents and each other. Some of the offspring produced eclipse geckos with high percentage carrottails so I began a separate project to create “carrottail eclipses”. At the same time, some of the offspring produced from the previously mentioned group began displaying extremely high percentage carrottails (75-90%). I kept holding back the best ones, selecting for higher percentage of carrottail or deeper orange body coloration until I started to consistently produce designer carrottails. 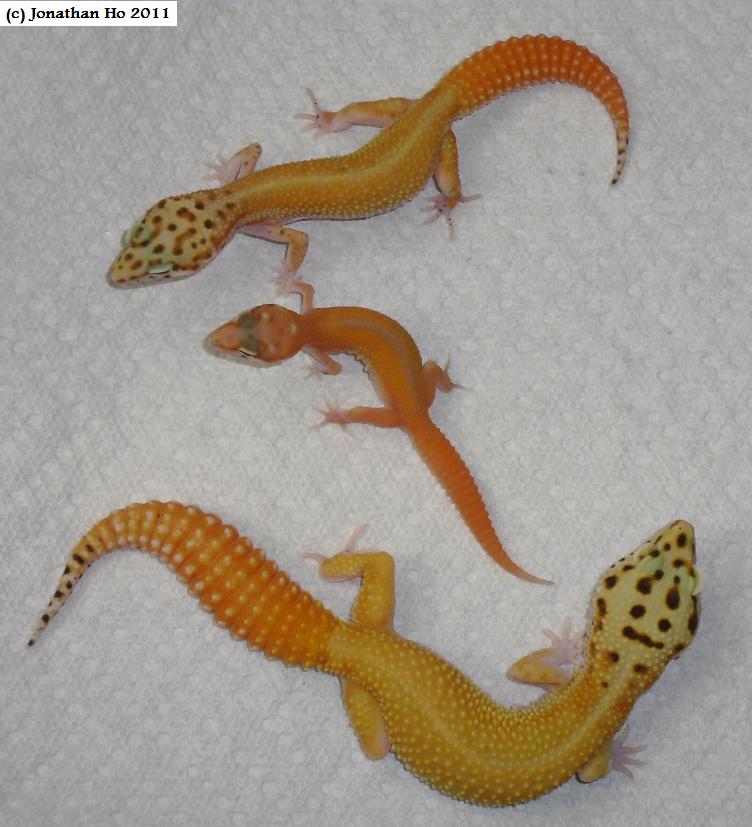 To summarize briefly, this project has been extremely fun and rewarding, but also long and exhausting! Both the “eclipse carrottails” and the “designer carrottails” I currently produce have a combination of “Hine” carrottail influence, hypo tangerine influence, red stripe cross and patternless stripe cross bloodlines. How much and how diluted over the last decade? I really can’t say for sure, but they produce some nice offspring!

My future goals include further intensifying the orange body coloration of the carrottail leopard geckos I produce, while maintaining as close to 100% carrottail as possible. Because my colonies have been “closed” for over five generations, I have recently added several unrelated specimens for genetic diversity. Once they complete a strict 12-month quarantine period, they will be added to my colonies in 2013 for breeding purposes. I hope to update you all soon with my results!

In the last decade, I have truly enjoyed watching carrottail leopard geckos achieve full circle success, from carrottails first being imported into the States, to the current global market, where thousands of leopard geckos in a plethora of colors, patterns and genetic mutations are imported and exported across many nations. With the recent rise of formidable diseases within reptile collections, immaculate housing conditions, proper husbandry, quarantine protocols, and expert veterinary care are becoming more important than ever. Do not skip steps and compromise the health of the animals. (see last Gecko Time article for great article on biosecurity! Lastly, do not forget the privilege we have to truly appreciate these wonderful creatures in captivity and the ultimate responsibility we have for their continued well-being.

Jonathan Ho currently resides in sunny California and has been breeding reptiles/amphibians for almost two decades.