My name’s Anthony Conti. I’m the owner of LeopardGeckoMorph.com and the business Greatgeckos. I wanted to start with a little about myself so everyone has an idea of who I am. I’m 24 and live in Southern California. I have been in love with reptiles my entire life, ever since my mom bought me my first ball python and green iguana.

Getting Started with Leopard Geckos

I started with my first pair of leopard geckos when I was about 17 years old and thought it would be fun to breed a pair. I had what must have been a high yellow and a normal. I was successful at breeding right away. I did everything Ron Tremper’s book taught me.

I went on to get a job at an exotic fish and reptile store in the valley working there while I wasn’t in school. This was probably my favorite job I’ve ever had to this day. I didn’t pay well at all, as a matter of fact I started there working for free as a volunteer. It was amazing getting to work with all the monitors, geckos, chameleons and snakes. The emerald tree boas were my favorite of the snakes, but I still was fascinated with the leopard geckos.

I kept breeding and got a bit more serious, buying my first “real” pair of breeders from Ron Tremper himself, RAPTORS! I was so excited to get them I almost jumped out of my skin when I saw the fed ex guy walking up to my door before 10:30 am with my package. I woke up at 6am just to be sure I didn’t miss the delivery! I continued to breed and hatched out my first raptor, a tiny little orangish yellow gecko with solid red eyes. ‘How cool was this’ you ask? The coolest thing ever, now I was hooked like never before. I grew the first pair out and placed them on display at the store. That’s when I noticed people were attracted to the more exotic looking, more brightly colored animals. After all, all we had at the store were normals, high yellows, and the occasional snow.

Now that you know a bit about me, let’s get to the important stuff! Leopard geckos and hatching out a world’s first! Let’s start where I started: bandits. A creamy body color with bold black markings and a reduced head pattern with a thick band across the nose, one of my favorites. Here’s my issue with the bandit…aside from a little difference and boldness in pattern (don’t get me wrong they’re gorgeous. Like I said they’re one of my favorites) but as I was saying they all look …. similar. I wanted to create not only a world’s first, but I wanted to create a bandit with insane colors. Greens, yellows, oranges, lavenders, blacks, browns, and…how about some carrot tail. Carrot tail never hurts — check out my LGM tangs. The hardest part about this was, of course, selecting my breeders….where to start? There are so many amazing bandits…I’d need a good male of course and a colorful female…That’s where I started. 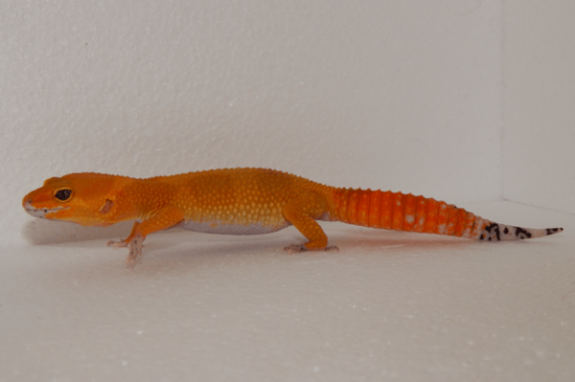 I bought a top quality bandit male from Ron Tremper himself, and an emerine type jungle gecko with a reduced head pattern. This was a disaster, I made nothing but high yellow kind of bandits with really terrible head markings; a lot of these didn’t even have a nose band. This was not the start I was after. The following season I selected different breeders to start the project since the original idea was not going to work. I sent an email to a breeder Garrick DeMeyer. I’m sure everyone is familiar with him, one of my favorite breeders, and a pleasure to buy from. I get all my ball pythons from Garrick and I know he owns a leopard gecko site so I decided to talk with him. That’s when I found out about his “skittles” project. He hadn’t yet released them to the public but I talked him into selling me a male reverse stripe skittles that was amazing he had so many different colors, there was about 3-4 shades of orange alone on it! That was in the picture; Garrick’s animals always look better in real life and I bought a bandit female as well …  a gorgeous female with lavender and a hint of green on her jungle body pattern (she’s still a breeder here today and lays fantastic eggs each season), and the most important part of the bandit, the mask.. It was outstanding, bold, bold, bold! I then picked a female bandit from Ron as well and bought her.  She was outstanding as usual, the same as every gecko I’ve bought from Ron, a big chub of a healthy bandit with an “as perfect as you can get” head pattern. The “smiley face” bandits.

I bred my skittles male to both females. After waiting patiently for the eggs to hatch, and by patiently I mean practically ripping my own hair out jumping up and down, the first babies were out! Hmmm….I hatched bandits…really bright yellow. Extremely bright yellow bandits with really bold markings…from both females I had the same thing. Well as all of us breeders know, you can’t tell the true quality of a leopard gecko until it’s about 35-45 grams. They were gorgeous when they grew up, tons of green and bright yellow with carrot tail and great bandit heads (my emerine bandits came as a byproduct of this project). So I held back all of these…I think I had about 18 geckos at the end that were holdbacks. Out of all the geckos I had zero reverse stripes…every single gecko was either a partial stripe or a jungle. Aside from one tiny little girl….she had an almost patternless body but a perfect head pattern. Weird…I kept her of course as well…I decided to breed the offspring back to each other in hopes of keeping the most “bandit” like head pattern safe and hoping that the “het” for reverse stripe came true for me. It did not unfortunately.

The following season I decided to breed my skittles male reverse stripe to the weird patternless-like bandit female. She had the perfect nose band and an odd body: it wasn’t completely patternless but it was close. You could tell she was a jungle but all the pattern was off to the side. So I bred her to the skittles. Keep in mind after each breeding I’m talking about there’s roughly a year passing. This was no small task and nothing that happened fast. The room, money, and supplies put into housing every single one of the “byproduct geckos” from this project was turning out to be a lot more than I bargained for.

Anyways I bred the Skittles reverse stripe to the weird bandit and only got 5 good eggs from her. I incubated one for male, and the rest were incubated female. I hatched out a temperature sexed male reverse stripe with bandit head markings!!! The females were all bandits or what looked like really bright bandits again. I emailed Ron Tremper right away (I had been bugging him throughout the last 3 years about how I was going to make a world’s first reverse stripe bandit). He told me that it was close….real close, but it wasn’t top quality, since it had too many lighter head markings and it wouldn’t do, I couldn’t introduce him to the public. He told me to keep it up, and try again next season, that I was doing a great job and producing some gorgeous geckos. This felt awesome to hear from the man himself. 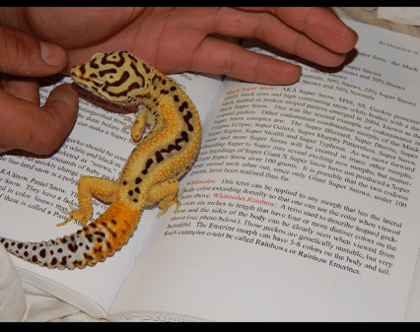 I kept at it, breeding this male to EVERYTHING. I mean EVERYTHING. Every single bandit I had was bred to this male…I must have produced over 80 bandits. The gorgeous jungle ones with green I put in a 6 quart 21 tub rack and paired them all to a gorgeous emerald bandit (nicknamed “the hulk”) who was a byproduct of the RS rainbow bandit project. I produced a few reverse stripes this time around, but only 2 were good enough and had the proper markings. I showed Ron yet again. This time I asked him “Hey Ron I’m back again. Do these pictures count as the world’s first and only reverse stripe rainbow bandit yet?” He responded, “That pretty much sums it up.  Very nice work… Keep on. RT. ” 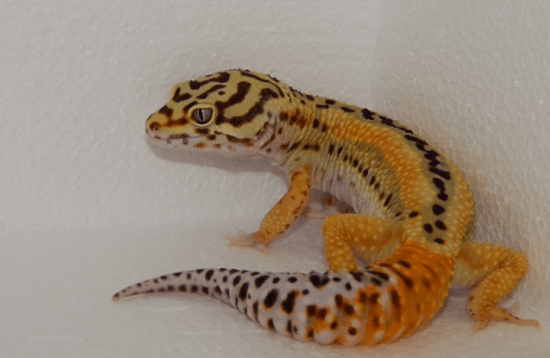 Finally…done, well not done. Now I have to breed him and successfully reproduce reverse stripe bandits for everyone to enjoy and work with. They’re gorgeous. He has a yellow, orange and green body, with a thick bold reverse stripe down his back. The green is remarkable: he’s the greenest gecko I’ve ever seen. His entire sides are green and he has thin green stripes on either side of the reverse stripe. He has a nice carrot tail that I will work on with this project and a beautiful bandit reduced marking head pattern with a band across the nose. The byproduct led to my rainbow and emerald bandit projects. I started selling these to customers who email a lot and make special requests. Most of my leopard geckos sell without ever coming close to being posted on my website and I hoard most of them for myself! After all I shouldn’t sell them all, right? I want to give a special thanks to Garrick DeMeyer and Ron Tremper for the advice and amazing geckos over the years. We’re all in this together; let’s create living art.

Thank you for reading and I hope you enjoy. To my first, world’s first and hopefully many more to come. I hope everyone has a wonderful season.

Anthony Conti works as a smaller private leopard gecko breeder and full time employee of an aerospace company in Southern California where he has lived his whole life. He grew up loving reptiles and continues to work with them. He is the owner of LeopardGeckoMorph.com and greatgeckos.