Over the past summer I decided that I wanted to design a better enclosure for my leopard gecko, Yoshi.  I’ve always focused on providing the most natural terrarium that I could.  Aside from making the tank more eye appealing, I hope that it lessens the stress on the animal by making it feel more at home.  My main inspiration for the tank was those Exo-terra and Zoo-Med tanks that have the foam backgrounds and look natural and realistic.  I spent a while researching what the natural habitat was for leopard geckos and I decided that I would try to make my habitat resemble the sandstone mountainous region of Pakistan.

I picked up all these supplies at Home Depot and had some of the stuff just lying around my house.  The total cost for this project for me was about $25.

Measure the inside of the aquarium or tank that you are going to use.  I used a twenty-gallon aquarium because it allowed me quite a bit of room to work.  The main thing to remember is that you should make 100% sure your measurements are spot-on the first time so that you don’t end up not having enough room in your tank later.  I decided to make a foam background as well as a foam cave that would slide down in front of the background and add a 3rd dimension to my tank.  I decided that layering up the foam like a layer cake would probably be the easiest way to make a hollowed out cave area.  As you can see by the pictures, I drew out each layer that I wanted to make and made sure they would all fit on top of each other nicely.  I cut out the layers with my jigsaw although you could probably use a large utility knife. 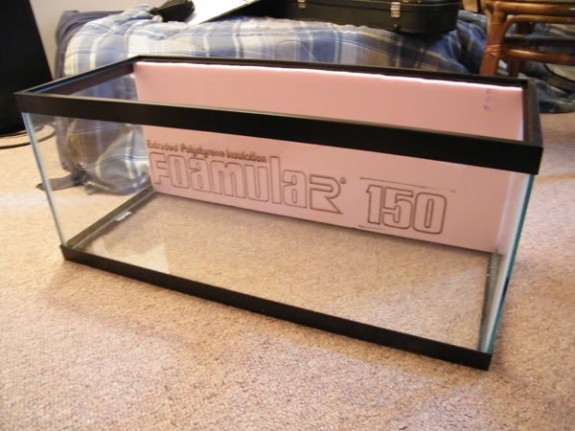 Once I was sure that all the pieces would fit on top of each other and fit down in the tank I glued them together with the Liquid Nails for Projects.  It’s kind of sticky stuff to work with but it holds very tight and doesn’t eat the foam away.  Once all the layers were glued on top of each other I left them overnight with some weights on top to make sure I got a nice hard seal on the foam layers. 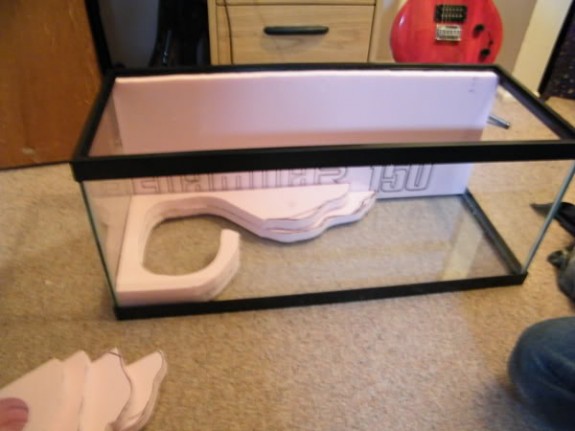 After the glue is done drying is when the fun part comes!  But a quick word of warning; this creates a huge mess so either do it outside, or have a good vacuum ready!  I had the best luck with a couple different types of metal files and sand paper.  I didn’t want the foam to look like a giant pink cake so I started carving down the layers to make them a bit more natural and weathered looking.  I used larger toothed files for removing large sections of foam and very fine-toothed files and sand paper for making it look smooth and adding that sandstone look to the foam.  This is the part where you really just need to be creative and make it look how you want it to look.  I tried to make all the hard edges a bit more rounded and tried to gouge some deep grooves into the foam to simulate fissures in the rock. 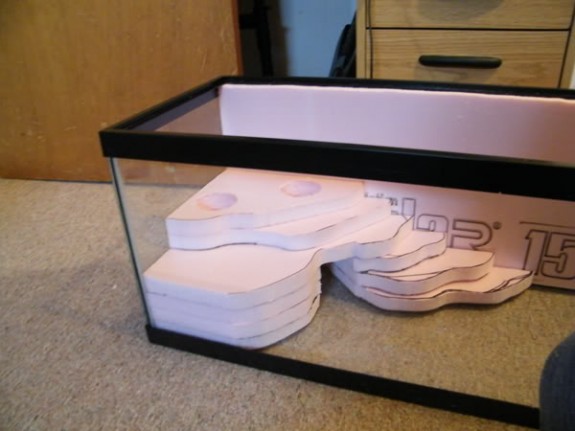 After I cleaned up all the pink foam that had covered most of my house, I was ready to paint.  I chose two different earth tones for paint, just a dark brown and a light brown but depending on what type of habitat you’re doing the color is up to you.  I covered everything in a base coat of the darker brown paint and then let it dry.  The main purpose of the darker paint was to just cover the pink and provide a nice base for the rest of my painting.  After that coat dried I added some of the lighter paint until I was satisfied.  Again, this is a part where it’s really up to you how it looks depending on what your goals for the project are.  Once everything was painted and dried I left it outside for 3 days to dry completely and air out to get all the paint fumes out. 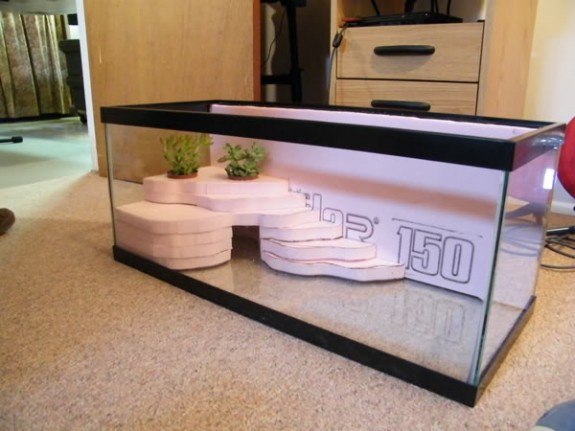 Once it was completely dry, I fit it into my aquarium, put in my substrate, and added my decorations and some big flat rocks.  I also decided to add some small potted plants of the succulent variety to the top of my cave area, which have since been taken out because they got too big. 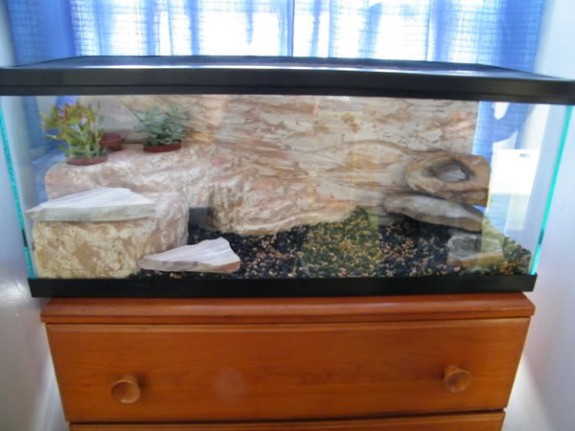 I’ve had my leopard gecko in that set up for about 6 months and so far everything has gone perfectly fine.  The only problem with this set up is that it is somewhat hard to pick up the cave to be able to clean underneath, but so far it hasn’t been a real big issue.  My gecko really likes to be able to get to the top of the cave and get closer to my heat lamp.  She also has been occasionally spotted acting like a crested gecko and clinging to the back wall with her claws.

Jesse is a full time college student with a major in Graphic and Web Design. He has been keeping reptiles for the past 8 years. His hobbies include wildlife photography, graphic design, field herping and reptile care.

More From: do it yourself