Gecko Time had an opportunity to speak with Kelli Hammack, owner of H.I.S.S. and GeckoForums.net, and multi-species breeder.

Tell us a little about the scope of your gecko breeding projects.

My focus has been on my leopard geckos for the past few years. I work with several variations of Bold Stripes, Bell Albinos, Rainwater Albinos, Tangerines, Snows and more.

Some of my past successful gecko breeding projects have included a variety of species of Rhacodactylus, Uroplatus, Nephrurus and several others. I currently work with a small colony of fat tail geckos, and hope to produce Patternless and Hets, White-Out Het Patternless, and some nice Amels in 2010. Almost all of my fat tails were produced by Pat Kline at Luxurious Leopards, so all credit for their beauty goes to him! I am also currently working with Uroplatus henkeli (Frilled Leaf Tail Geckos) and Aeluroscalabotes felinus (Cat Geckos), both of which I hope successfully reproduce this year. I am slowly beginning to build up my “non leopard gecko” collection again and I am feeling great about that!

On a side note I also keep two groups of Xenagama lizards, X. taylori and X. batillifera, which are fascinating little lizards that are about the size of a medium sized Nephrurus gecko, but have care requirements similar to a bearded dragon. I still have no fertile eggs on the ground but I have high hopes for this year. These little guys are fantastic pets and are rarely seen as captive bred hatchlings in the hobby.

You have been involved in the early stages of breeding several new morphs of leopard gecko such as bell albinos, bold stripe, the enigma. What have your experiences been working with these morphs when they were new?

Well, let’s start with my favorite, the Bell Albino. This was a brand new morph back in the early 2000’s and when I set eyes on my first Bell it was gecko love at first sight! The original animals were heavily spotted with bold, maroon colored markings on a paler background. Another thing that I found so striking about them was the reddish-pink eyes, which was quite different from the grayish colored eyes of my Rainwater Albinos (at that time the only albino line I worked with).

I immediately thought of the potential these Bells had, and what the future could bring. I crossed them into my SHTCT line and my Bold Stripes right away to begin the process of creating new morphs of leopard geckos. In 2004 I hatched the world’s first Bell Hybino , and the next year hatched the first Striped Bell. It is a fantastic feeling to check the incubator one morning and see those one of a kind geckos that have just hatched!

I continue to work on improving my Bell Albinos by selectively breeding them. I am very happy with the high lavender Striped Bells I produced last year. I also produced some absolutely stunning Striped Bell/Emerine crosses last year which I cannot wait to breed together in 2010. I’ll keep you posted on those! My Bell Hybino project consists of a very small group, however the nicest Hybino I have ever produced came out of that group in ’09. Paul Allen from Bright Albino now owns that animal (a female) and the rest of my Hybino clan are going to live with him for awhile to see what kind of magic he can do over there!

“Gecko Forums” has grown tremendously. What were your goals when you started?

I had been thinking about starting a forum-based website that centered on leopard geckos for a couple of years prior to actually taking the big step and just doing it. Prior to GeckoForums, the leopard gecko community was (or so it seemed at the time) much smaller, and while we had our “Leopard Gecko Forum” on a couple of the larger reptile related websites, we really didn’t have a place to call our own. In 2006, I decided to just go for it and well, that’s what I did! With the help of Ryan Roth I started GeckoForums.net.

At the time of its inception, the site was meant to be a place for a small group of people that kept leopard geckos to share their opinions and experiences with each other. I had no expectations of anything more, and the fact that the site has grown so tremendously over the years is fabulous. As with any large, forum-based website, there are some personal drawbacks to running it but the majority of my experiences with it have been positive and I know that the site has been a wonderful resource for leopard gecko lovers worldwide, both new to the hobby and old timers.

Looking at Gecko Forums now, what do you see in the future?

My hope is that GeckoForums can continue to grow as a community, and continue to provide an outlet for keepers all over the globe to share their knowledge and promote their businesses.

What are some of your projects and plans for the future?

As far as leopard gecko projects go, I am quite excited about my Striped Bell/Emerine crosses as I mentioned above. My goal with that particular cross was to increase the lavender color on the Bell Albinos, because the “green” color on the Emerines is actually lavender until the geckos begin to reach subadult sizes, and then it is overtaken by the tangerine color, which is what gives it the green hue. However, I am very pleased with both the large amount of “green” these crosses display, and also the intense orange color most of them possess. I am thinking the offspring from these will be unique and very pretty. 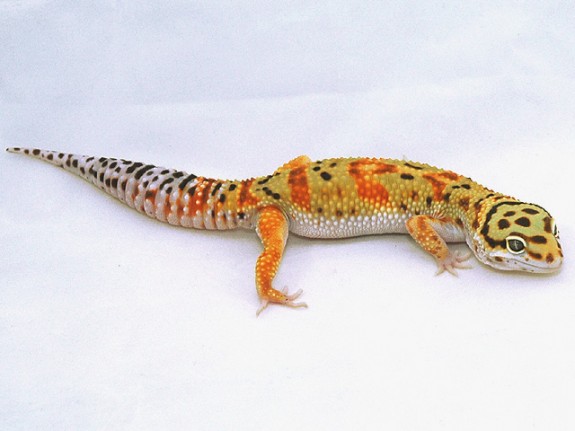 My plans for the future include expanding my “other gecko” collection and also working with some rare lizards that are not bred often in captivity. I recently acquired a group of Green Tree Skinks, Lamprolepis smaragdina for example, and I have high hopes for them. They are lovely and (I feel) under-appreciated in the hobby.

How do your and your husband’s reptiles projects differ from or complement each other?

This question is an easy one! My husband’s projects differ from mine in that he does not keep any reptiles at home anymore. We have one Honduran Milksnake that is my 8 year old son’s pet, and the rest of the animals are mine. Steve works as a keeper at our local zoo and he gets to have lots of cool experiences with herps during work hours. He decided that was enough for him at this time and is taking a break from keeping any reptiles at home. He’ll eventually get back into it though. It’s inevitable!

You have been dealing with geckos for a long time and have seen big changes. What do you see as a future for the gecko market as a whole?

The gecko market has seen its shares of up and down times over the years, and with the added worries about a troubled economy, 2008-2009 were not the best years for selling geckos. However, I feel a major shift and I believe the market is going to pick up in a big way in 2010. I meet so many new people becoming interested in geckos and reptiles in general on GeckoForums and at the reptile shows where I vend, and have personally done quite well at the last few shows I have done, which makes me feel that it’s going to be an awesome season!

How do you go about trying to take vacations with such a vast collection?

Vacation? My “vacations” if you can call them that are when I go work at an out of town show for the weekend! I will say that Steve and I are lucky that we have a 19 year old son who lives in the same city we do and doesn’t mind helping out with our animals when we have to be gone for a couple of days to a show. I must admit a real vacation sounds great right about now (me on a beach in some tropical area of the world with a fruity tasting drink in my hand…) but for now I am quite satisfied with being at home with my family, and my geckos!

Thank you so much for sharing so much with us. Readers should check out Kelli’s website at www.hisss.net and the Gecko Forums at www.geckoforums.net.