New Year’s Eve.  A time to remember the highs and lows of the previous year and look ahead to the coming season.  In the spirit of the day, Gecko Time features 12 gecko keepers reflecting about the 2013 season and giving us a sneak peek at their plans for 2014.

Want to join the party?  Feel free to give readers a peek at your own 2014 season by using the comments section to respond to the questions above.

1.  2013 was a very productive year for me.  I started keeping and successfully bred several new species and learned a lot along the way.

2.  2014 should see some expansion in my reptile room, both in numbers and diversity of species.

3.  I’ll potentially be looking for more Oedura, Paroedura, Afroedura (notice a theme?) and I may end up trying a few new Hemidactylus species.

4.  I just started incubating my first Uroplatus egg, so I hope to hatch a few nice henkeli next year.  I just pulled the trigger on my first Nephrurus, but will probably have to wait until 2014 to receive them due to shipping weather and the holidays.  I don’t anticipate many new purchases or projects next year, but I hope to get my first eggs from a few species I’ve been growing up and I may add to a few breeding colonies.

2. In 2014 my plans are to continue reducing my Collection down to only a few Day Geckos and focus more on other types. Lately I have a real fondness for Paroedura and other night active Genera.

3. I am going to try and be good this year, so I am not planning to buy anything new until I am able to reduce my Collection first. 😉

2. I will not be expanding, but have added a couple of new projects, and am letting some breeder females rest for 2014.

3. My wish list is a really nice pair of AFT’s.

2.  I am cutting down on gecko projects, but hopefully branching out into some non-gecko breedings.

3.  My main thing on my wish list is just to have the season go as planned.  As for animals, the list is huge!  I’m always finding things that I want if I had the space.

4.  My leopard gecko projects will mostly be eclipse het tremper/poss het tremper (including w/y), eclipse het bell/radar, and blood hypo tangs.  One new project for me is breeding my pair of yellow ackie monitors.  I’m also hoping to get a couple other new projects going, but I’m still trying to decide what I want the most.

1. This past season had its up’s and down’s, but overall I consider it a successful year.  During the past season I took some serious hits, but in the end I did move and therefore expand my reptile space significantly, and through specific negative experiences I gained some perspective, and learned some valuable information.

2. With the expansion of space, including separate rooms (climate zones), I am looking to expand my breeding projects for the future, and the wheels are already in motion for this plan.  To accomplish this, I have held back many of the 2013 hatchlings in an effort to increase species group size, and to exponentially produce more offspring from the species that I do well with.  Species included in this are: Strophurus ciliaris ciliaris and taenicauda, Nephrurus amyae, wheeleri, and levis, Chondrodactylus angulifer angulifer, and Pachydactylus vanzylii and rangei.  Whether or not I will expand the number of species I will work with is yet to be determined, but I always have plans to acquire additional animals for increased genetic diversity within my existing colonies.  My goal is to keep my projects enjoyable.  This way I can focus my attention on detail.  As long as keeping reptiles is fun, and is not seen as a job, a burden, or stressful, I can continue to expand.

3.  This is a great question, but it really should be divided into two categories; realistic wishes, and pipe dreams.  I have already given Santa my list of species, but unfortunately I must not have been a good boy!  But seriously, I am always looking for new beautiful, unique, hardy species that are not only desirable, but harder to find.  Included are of course many species native to New Zealand, as well as Nephrurus asper, and perhaps even a few other live-bearing species.

4. Two new projects that I’ve acquired before the start of 2014 include two lizard species, Cordylus cataphractus, and Laemanctus serratus.  Aside from these two, I am just concentrating on the species that I am currently working with, at least until something I must have pops up!  After my winter brumation, I plan on pulling my geckos out of cooling, and as is the case every season, I will feed them heavily, and then pair them up in hopes for a successful 2014 breeding season.

1. My leopard geckos produced great for me in 2013, but I moved my crested geckos and they shut off breeding for most of the year.  I’m very proud of the color and pattern quality of my ’13 leopard geckos, though!

2. I’m planning on keeping my collection about the same size.  I made a conscious effort to reduce my collection a couple of years ago, so I could focus on producing smaller numbers of very high quality geckos- enough to keep my website full, but not so many that I get overwhelmed with babies.  I am focusing on producing morphs with bright color and bold pattern- trying to improve upon the looks of the morphs I produce, not necessarily trying to produce brand new morphs.

3.  I don’t really have anything I’m looking to add to my gecko colony in 2014.  If I see any outstanding individuals that I think would complement my collection, I will add them.

4.  I am mostly just trying to produce the nicest examples of my existing morphs that I can.  I’m doing a lot of cool reverse stripe leopard geckos including bold black, lavender, and tangerine.  I’ve also produced a new line-bred morph I call “skittles” because of the assortment of subtle colors throughout the body.  Some of the geckos that have come out of my Skittles line have tri-stripes.  A reverse stripe down the back and two smaller reverse stripes starting at the neck and shoulders and running down the back.  They are really cool, unusual geckos!

1. I have to say 2013 started off by kicking us in the butt big time with two separate web site hacks, the new site taking 6 months to upgrade, and family issues that brought us down until around June.  The tables turned the last 6 months with the new Supreme Gecko web page, more new-species (for us) hatches in our facility than we ever saw before, and finally the best 12 Supreme Days of Christmas gift giveaway ever!

2.  We plan to stay the same and expand!  Our breeding stock will not change much at all as I am working with the species I love.  However, I am hoping to breed several 2013 new acquisitions in ’14 and that will be exciting.

4. This is difficult as it is so diversified- from new Hemidactylus, Sphaerodactylus, and Paroedura to better examples of crested colors and patterns (dalmatians, red harleys, red pinners, and others).  I hope to start offering some more difficult species to the hobby in 2014.
Season’s Greetings to everyone and hope everyone has a wonderful 2014.

2013 was a great season at Roc Geckos. Some of my long-awaited projects finally matured (chahoua, white collar sarasinorum, agricolae) and gave me a strong first season. I also added a few new projects that I’m looking forward to starting in 2014 including uroplatus henkeli, paroedura stumpffi, phelsuma klemmeri, phelsuma q. quadriocellata and phelsuma standingi. In addition to starting those projects in 2014, I’m planning on selectively adding a few projects including a strophurus species and another pair of coleonyx elegans.

1. Very little gecko breeding in 2013 for me.  I moved from AZ to WI and had to move all my animals.

2. I will be expanding a little in 2014 and breeding some new gecko species.

4. I will be expanding my flying gecko and red eyed crocodile skink projects.  Also attempting to acquire more gekko smithii and begin breeding these as well.

1. By focusing my efforts on fewer gecko species, all which have major husbandry challenges, I was able to conclusively describe best husbandry practices and breeding scenarios for Phelsuma inexpectata and Lygodactylus williamsi.  In 2013 I was able to breed Lygodactylus williamsi into F2 utilizing dietary D3 in place of artificial UV producing lights.

2.  Gecko projects in 2014 will be significantly reduced from the efforts in the last ten years.  After the privilege of working in a large first class customized gecko room with a fully automated environmental system, I’ve moved to a new city, a new home and a new gecko room.  The new gecko room is in a small bedroom with similar husbandry conditions faced by most hobbyist gecko keepers.  Working in a small, less controlled environment presents new challenges.

3. My 2014 wish list includes a second male Lygodactylus williamsi for bloodline diversification, a male Phelsuma ornata, and the addition of  a few more keepers to co-op.

4. This coming year I will be addressing the husbandry challenges of small spaces with all its unique husbandry and environment challenges.  I will continue to stabilize the rare Phelsuma species that exist in the US as well as Lygodactylus williamsi.

2.  My breeding population will remain more or less the same, with the hopes of increasing the number of females that actually produce.

3.  I’m pretty much at capacity for geckos, but do hope to obtain a W&Y leopard gecko to be a breeder in 2015

4. I have 8 L. williamsi eggs incubating and hope to have more success with the hatchlings.  I’m also hoping that I’ll be successful with my newest AFT project and will be able to produce white-outs and patternless white-outs. 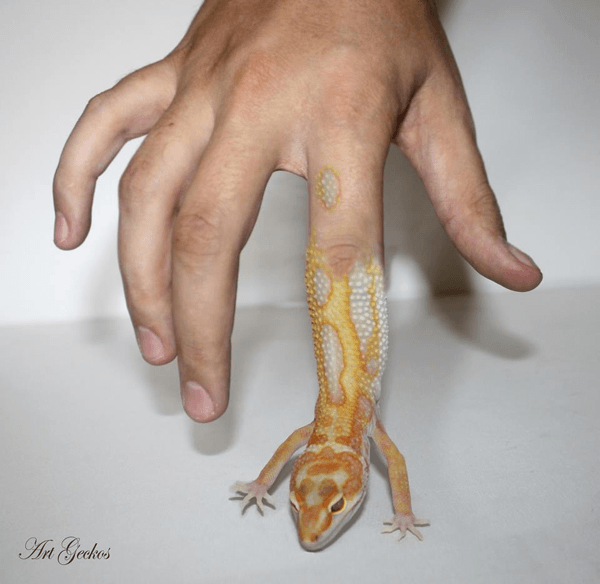 1. It has been said, that an expert is someone who has made all the mistakes that can be made, in a narrow field. Thus, 2013 was a huge success, as it revealed many ways to improve the standard of care for our animals; such as safer cleaning techniques,  improved shipping standards, and effective medical care.

3.We are eager to utilize genome sequencing to better understand various mutations, and contribute to the scientific understanding of these fantastic animals.

4. While we are looking forward to producing novel combination morphs, such as HC^2 White & Yellow’s, we are just as enthused to refine distinct lines of Enigmas with little to no ES.  We will continue our commitment to providing public access to new information on leopard gecko health & genetics. 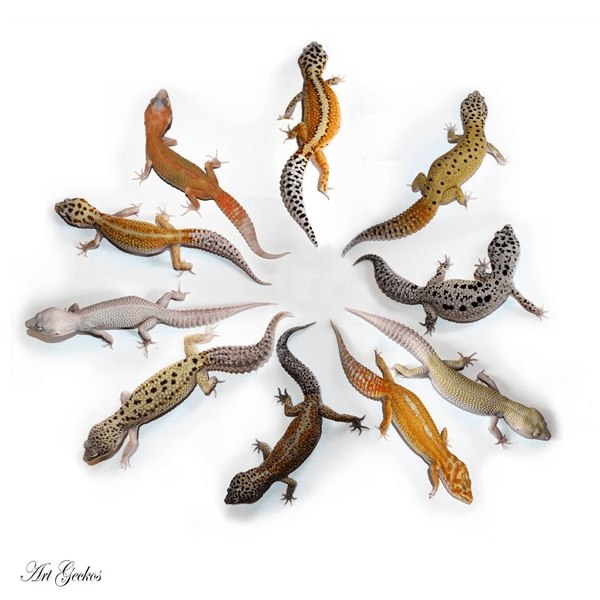