Recently, interest in L. williamsi, the Electric Blue Day Gecko, has skyrocketed due to its eye-catching color, vibrant personality and recent endangered status.  In fact, there are 60 Lygodactylus species, only a small fraction of which are kept  in captivity.   Many people who keep Lygodactylus are also involved with other day gecko genera (i.e. Phelsuma) or keep other “dwarf” geckos.  Accordingly, you will recognize the names of some of our experts below as contributors to recent “Three to Get Ready” profiles.

As always, the contributors have responded to these questions:

1. What species are you keeping?
2. What got you interested in this species and where did you get your first one(s)?
3. How are they set up?  Describe your enclosure
4. What do you find most interesting about them?
5. What do you find to be the biggest challenge?

As  with Sphaerodactylus, my interest was gained while reading a book about Phelsuma, Lygodactylus, Sphaerodactylus and Gonatodes. Their small size drew me to them instantly! My first Lygodactylus, a kimhowelli, came from a now friend in Hagen, Germany. Was a rather funny moment, as we found out just how small the world could be. Turns out we are upstairs neighbors with a good friend of his and that his wife is formerly from Münster, Germany, where my husband and I reside. My next species was williamsi, which at first, oddly I never liked; from there it was picturatus followed by grotei.

All of the Lagodactylus enclosures have cork bark on the side and back walls. Cork is really a favorite decoration of mine, and pretty much every tank in this house has cork in some form. I also have various tubes of cork, bamboo and Japanese knotweed in each enclosure. Plants from the genus Peperomia, Dischidia and Hoya can also be found in almost every terrarium as well. Additionally I like to add in some bromeliads, as sometimes the females like to use them for egg laying spots and in my opinion no terrarium of mine is complete without a bromeliad or two! The substrate is a mixture of sphagnum peat moss, planting soil (fertilizer free), finely ground cocoa husk and sand. Each enclosure is lighted by a UVB bulb and secondary 4,000K T5 lamp. The final decor is a bowl of crushed up cuttlefish bone and a small water dish.

A big challenge is where to keep all of the babies. Lygodactylus can be rather prolific. I have a small army! 😉 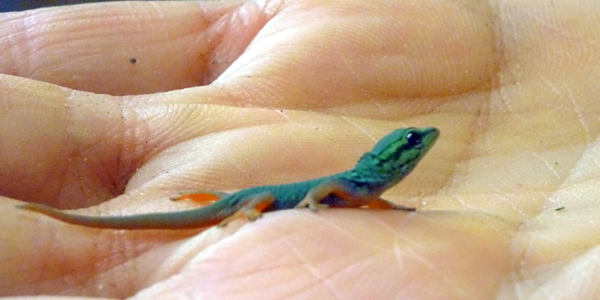 I currently work with one pair of Lygodactylus picturatus, a group of four williamsi and a trio of kimhowelli. My first Lygodactylus were the williamsi. I got them from a Finnish reptile keeper named Juha Parkkinen, who helped me a lot on getting started with the more exotic species of reptiles. The first group arrived to me in 2010. Shortly after getting the group, I started researching other species belonging to the genus and I came across Maureen Winter. She had a lot of information to offer and increased my interest in the genus even further.

All three species are pretty much in similar setups, however the picturatus have a more powerful bulb and basking spot with slightly higher temperatures. As for lighting I mainly use Solar raptor 35w HID bulbs, while the picturatus have a 50w bulb from the same company. The substrate is a mixture of peat panels, coco husk and sand. All enclosures have a piece of wood offering vertical and horizontal climbing space under the bulbs. One or two large pieces of cork are placed in to each enclosure, to offer shade for cooling and hiding spots. Pieces of bamboo offer additional spots for climbing and egg laying. As for vegetation I use Soleirolia soleirolii (Baby’s Tears) only. I plan to add, at a later date some Tillandsia.

When I started working with Lygodactylus williamsi, I was fond of their blue color. Later on, I found that I truly enjoyed their behavior. They have a very unique way of socializing. They are also far from shy once they get to know you.

With regard to challenges, I think every animal is easy to take care of once you have the correct setup for them. I’m currently just beginning to breed picturatus and williamsi, along with preparing to care for the offspring. I’m fairly certain the offspring will be the biggest challenge for me, but I am well prepared and have high hopes.

In the past, my husband Greg and I kept Lygodactylus capensis, L. picturatus, and L. pictus.  After a few years the Lygodactylus species were put aside as we became more involved with the Phelsuma species.  Three years ago I was drawn back into Lygodactylus and specifically with Lygodactylus williamsi.

Since the start of commercial collection of L. williamsi in 2004 (all
illegally) for the pet trade this species  has been pushed to the brink of extinction.  Conservation groups have little time to put this threatened species under international protection like the CITES.  The IUCN Red List of Threatened Species lists L. williamsi as Critically Endangered.  Due to its extremely small area of origin that faces severe habitat destruction and continued illegal poaching, they face extinction in the wild in my lifetime.

In 2011, the plight of Lygodactylus williamsi came to my attention and I began to investigate its husbandry challenges.

In the spring of 2011 I bought three wild caught L. williamsi on line and picked up four more from two vendors at a reptile show.

Finding a safe enclosure on the reptile market for adult L williamsi was difficult.  The most popular terrariums from ExoTerra and Zoo Med turned out to have too many problems for very small geckos.  These reptile enclosures had numerous hidden spots, pinch risks and areas hatchlings could be forever lost.

For lighting I use a high quality linear fluorescent (non-uv) bulb and a halogen puck for basking.  None of the L. williamsi raised here are exposed to UV bulbs.  Instead they are fed additional amounts of vitamin D3 and calcium at each meal.

The interior has about an inch of organic soil, a few thin clean tree branches that run from top to bottom, and a potted bird’s nest sansaveria.  I like to keep the interior simple so to better observe and monitor gecko health.

L. williamsi are absolutely beautiful but I found them to be intriguing critters to watch.  They are inquisitive and jovial, and property housed, take full advantage of their given space.  I love to watch hatchlings dart around a terrarium chasing fruit flies or licking fruit baby food from a spoon. These are just delightful little geckos to watch.

L. williamsi require more attention than most other species of geckos I’ve taken care of.  The small size of the adults is such that dehydration is a real problem and ongoing issue.  Depending on the time of year and ambient humidity levels, I  often mist them three or four times daily.  The hatchlings pose a even greater hydration challenge.  I schedule four mistings daily as a minimum without fail.

A small body has sustenance challenges.  Adults need to be fed daily, gravid females even more and juveniles benefit from a couple of meals a day.  Their food needs to be tiny so having pinheads that are one to seven days old  and/or supply of small fruit flies is necessary.  Thank goodness they love fruit baby food!

Problems I have not had is controlling incubation, accurately sexing, keeping hatchlings alive, and producing 50% male and female offspring. 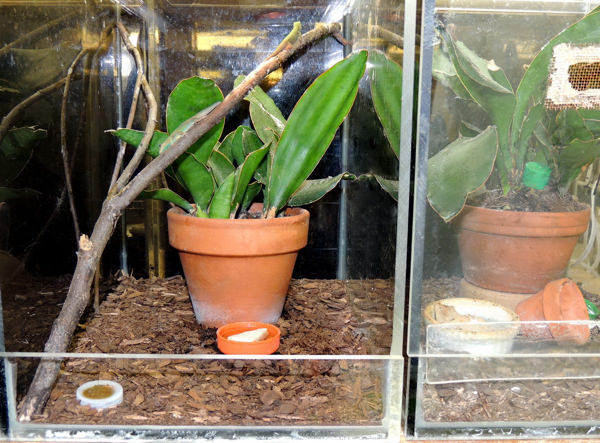 Leann Christenson is a Gecko and Phelsuma curator at Leaping Lizard Day Geckos.  She shares her unique and successful husbandry techniques in the book, Day Geckos In Captivity, articles in the nationally syndicated magazines Reptiles Magazine and Reptile Care, and contributed to Global Gecko Association’s specialized publications, Chit Chat.   Changing her direction from the business end of the reptile hobby and industry, she now devotes her time to solving husbandry problems of rare and endangered day geckos.  She maintains a popular blog, Frankie Tortoise Tails at www.frankietortoisetails.com

Mikko Ilosalo: I’ve lived my entire life in Finland, in a town called Rauma. Ever since I was a child I have been fascinated with nature, from birds to fish and eventually reptiles. I work at a paper factory in town and much of my spare time is dedicated to reptiles, be it researching or just generally taking care of my own. At the very early stages of my entrance in to the hobby, I learned that Finland is massively behind in terms of understanding reptiles. This forced me to reach outside of the country for information and this also made things move more slowly than I would have hoped. In the future I am hoping to get properly into breeding Lygodactylus and improving myself in terms of understanding reptiles constantly and trying to network more in my home country.

Born and raised on Long Island, New York, Maureen Winter has been keeping reptiles and amphibians on and off since the age of 7. Her first reptile was a Red Eared Slider. Later on she kept various amphibians ranging from Hyla cinerea to Litoria caerulea and was quickly hooked. Eventually Maureen moved to Münster, Germany and longed to have her beloved amphibians once again. She began with Litoria caerulea and her hobby grew to keeping various species of dart frogs. After a year of owning dart frogs Maureen desired to have some geckos and soon her first geckos, Phelsuma klemmeri, were purchased. Shortly after, she began keeping many different geckos. She currently works with various Phelsuma, Lygodactylus, Sphaerodactylus, and Lepidodactylus lugubris, alongside her many frogs.