There is that awful moment for those of us who keep our feeders (meal worms, crickets, superworms, etc.) in gutload grain bedding when we realize that the bedding has been infested with grain mites (Acarus siro).  Although the grain mites themselves aren’t particularly harmful to  feeders,  geckos or  humans beyond possibly causing a mild, itchy, allergic reaction, they’re nearly impossible to get rid of without discarding the bedding and, inevitably, the feeders it houses.  You’ll notice that I titled this article “How I Got Rid of Grain Mites” rather than “How to Get Rid of Grain Mites”.  This is because I’m no grain mite expert, but have successfully de-bugged my collection and saved most of my feeders in the process.  Success is not guaranteed, but give it a try.

Grain mites are tiny (0.013 to 0.026 inch long) arthropods that infest grain or other food, usually in humid, warm conditions.  They are difficult to see individually without magnification, but, due to their high reproduction rate, manifest themselves as a brownish or grayish dust on some surfaces, and with a wavelike motion in the grain they have infested.  If you ever see your gutload heaving and wiggling, believe me, you don’t have a population explosion of baby mealworms, as I thought the first time I saw this; you have grain mites.  Grain mites generally have a life-cycle of about 2 weeks (longer at temperatures below the high 70’s).  Females are estimated to lay about 800 eggs during their lifespans.  If grain mites become too crowded for the food source they’re infesting, they will spill over in search of other nutrition.  This is likely the reason that some reptile keepers have reported infestations that have gone beyond their gutload and appear on their shelves and other furniture.

Grain mites may arrive via contaminated food items.  Presumably, they could also be airborne from more remote contaminations, since all my grain mite infestations have occurred with no corresponding infestation of either my gutload or any food in my house.  Since grain mites thrive in warm and humid conditions, it’s important to keep gutload and bedding cool and dry.  This can obviously be difficult in hot and humid areas where there’s no air conditioning.  In this case, gutload and feeders could be stored in a basement or other cool place.  Many people keep their reptile rooms at relatively high temperatures year-round.  If this is the case, feeders may need to be stored in a different location.

To further prevent grain mite infestation: keep an eye on the food in the house meant for human consumption to insure that it’s not infested.  There’s a greater likelihood that food purchased from bulk containers, as opposed to pre-packaged food, may have grain mites.  Grain bought in bulk could be temporarily stored in the freezer or refrigerator to kill the mites.  Gutload bought in bulk should be similarly treated. 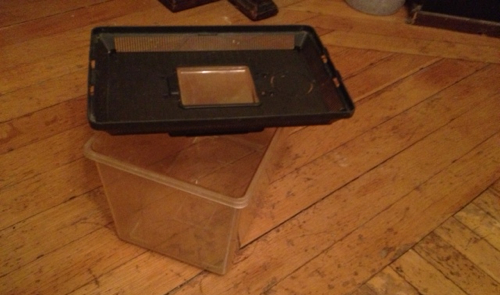 Despite all the precautions taken to avoid grain mite infestation, sometimes it happens anyway.  I have an “early warning system” which I hope will keep my infestation from getting to the “heaving grain” phase: I keep nearly all my feeders in covered containers, as opposed to open plastic drawers.  I inspect the inside of the covers regularly for little white dots.  If I see them, I check with a magnifying glass and, if they are grain mites (as opposed to wheat bran chaff, for instance), they’ll be moving around.  That’s when I spring into action.

If the feeders are on the larger side, like adult crickets or superworms, I  move them individually to a new container with new grain.  For smaller feeders and breeding colonies, like mealworms and mealworm beetles, (or for the larger ones as well) I isolate the affected container and continue to feed them off until they’re gone.  All containers that have been emptied and all lids, whether or not they’ll be re-used immediately, are washed with very hot water which will kill the grain mites.  When the weather is cool enough, I place the washed containers outdoors for awhile to kill of any mites which have miraculously survived.  The containers could also be placed in a cool basement or in a refrigerator or freezer.  As mentioned above, it’s important to move the feeders to a cooler area if they’re sharing a warm room with the reptiles.

Once I’ve isolated the “problem” containers and washed the containers and lids, I monitor all containers daily by inspecting the inside of the lids to check for grain mite return.  If I find mites inside the lids, I repeat the steps of isolating, switching containers and washing the lids in hot water.  As long as I can keep the grain mite population under control through frequent washing, cool temperatures and isolation of affected containers, the “plague” will eventually disappear as the feeders are used.
Fortunately, I’ve had grain mite infestations only every few years, usually in the hot and humid New England summers.  My most recent grain mite infestation was in late October and early November and affected my crickets, mealworms, mealworm beetles and superworms.  The only feeders I lost was one container of mealworm beetles when I unthinkingly stored them temporarily in my heated rack.  One day later, the entire surface was heaving and into the trash (outside garbage cans, of course) they went.  Other than that, I remain mite free at the moment and didn’t have to replace any of my feeders.

Note: information about grain mites was gathered from the following websites: http://www.ca.uky.edu/entomology/entfacts/ef629.asp
http://ento.psu.edu/extension/factsheets/flour-and-grain-mites