Halmahera giant geckos (Gehyra marginata), sometimes erroneously referred to as “vorax geckos,” are large, arboreal geckos from the island of Halmahera in Indonesia. They are one of the largest species of gecko, attaining a total length of approximately 11 inches (30 cm), similar in size and shape to the tokay gecko (Gekko gecko), but often faster and much less aggressive. They are also sometimes called “the poor man’s leachie” as they grow impressively large but are often not particularly expensive to acquire.

The genus Gehyra contains several large gecko species, including the true vorax gecko (Gehyra vorax). Marginatas are often imported under this name, but no true vorax geckos have entered the United States in 30 years, and there is only one known elderly pair currently residing here. It’s usually safe to assume any gecko labeled vorax is unlikely to actually be that species.
Marginatas are usually cream or light brown in color while resting and darker or with more cryptic moss or lichen-like coloration while active. Juveniles are often brown or pinkish. Fully mature adult animals have jade-green eyes with black reticulation, and a black vertical pupil. Their feet are also particularly unique in having sickle shape appendages tipped with claws. 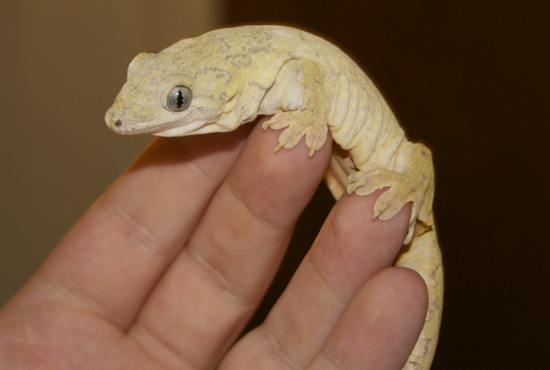 Halmahera geckos grow large and are very active, so should have adequately spaced terraria. They are most at home clinging to branches or vertical surfaces, so a vertically oriented cage is better. If a glass aquarium is being used, a 30 gallon tank on its side would house a pair. Commercially available terrariums with front-opening doors are also recommended. Substrate can be coconut fiber, newspaper or paper towel. They will drink water from a dish so providing fresh water at all times is a good idea, as well as nightly misting. They seem to prefer high humidity. This species also enjoys leafy cover so live or fake plants are recommended, as well as ground based caves or tubes for sleeping in during the day. They are not a particularly aggressive gecko, and female/female or male/female pairs can often be housed together, but, as with most lizards, not male/male pairs.

As for lighting, they do not require UVA or UVB lamps, a situation common to nocturnal species. They are also not particularly needy when it comes to heating. Most of the year, we keep them at room temperature, or around 72 degrees with a slight drop at night. During colder months, a small low wattage red heat lamp can be used (I usually use a 50 watt bulb), and they will occasionally bask under it. The warmest spot in the cage is not more than 80 degrees F.

When I first acquired this species, I had mixed information about proper diet for them. What seems to work the best is a staple diet of Repashy Crested Gecko Diet (sometimes referred to as “CGD”), which is a powdered meal replacement food that can be mixed with water. They will also eat as a treat most types of insects, and particularly seem to go after large crickets. We dust the insects and give them those about once a week. The CGD food is offered about every three nights. Very occasionally (not more than once every month) they are offered some fruit and in particular they greatly relish bananas. They also enjoy honey.

These are very fast geckos. Couple that with a peculiar defense they have of sloughing off big chunks of skin, and you have a potential recipe for disaster. Wild caught animals especially are known to be flighty and distrusting of human hands, although unlike tokay geckos, marginatas are not known for being aggressive biters. This is why most wild caught halmaheras are profusely scarred animals. As with most reptiles though, they are absolutely tame-able animals. 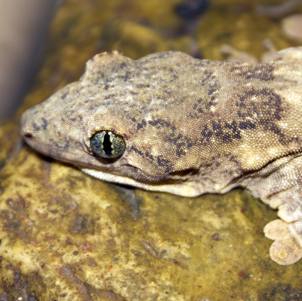 Do not restrict the animal in your hands. They are very fast, so attempting to handle them in the cage (especially front opening terraria) is the easiest way to start. Starting with younger, captive bred animals tends to make this easier as well. Mine were hatchlings bred in Florida, and tamed within a few months of regular handling. They are still more skittish than any of my crested or gargoyle geckos, but will allow me to hand walk them and will usually lick honey off my fingers. (This is a good way to get them to trust you actually).

Even if you don’t plan on attempting to tame them, they make really rewarding captives. They are some of my most active geckos, even moreso than my giant day geckos. They’re always prowling around their tank starting around 9:00 in the evening, and are often inquisitive about what I’m doing in the room, and not at all shy about coming out into the open once the lights are dimmed.

I am still working with this species regarding successful breeding, and hope to have more information next year. Other keepers have communicated to us that breeding is induced with a slight cooling off and photoperiod, but may wll breed without taking this step. They prefer to deposit two eggs glued to the inner surface of a tube structure, such as a hollow piece of bamboo or PVC pipe. The eggs can be incubated in situ, or moved to an incubator and kept similar to Rhacodactylus eggs (i.e. room temperature). They take a good deal longer to hatch than many familiar species, sometimes as long as 6 months. The hatchlings, and I can confirm this firsthand, grow slowly and may take two or three years to fully mature.

Ethan Kocak is a professional artist who has been keeping and breeding reptiles as a hobby for 20 years and decided at around 15 that geckos were his passion. He currently breeds mostly Rhacodactylus geckos but also keeps tokays, giant days, mourning geckos and a few other oddballs. He owns and operates
gestaltgeckos.com.