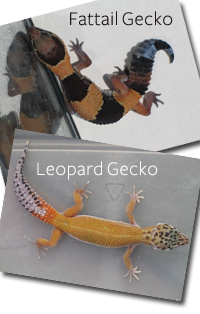 Leopard geckos (Eublepharis Macularius) and African Fat Tail Geckos  (Hemitheconyx caudicinctus) are of a similar size, have movable eyelids and are born with alternating dark and light bands.  Leopard Geckos are native to the arid mountains of Afghanistan, Pakistan and Turkey in Asia while Fat Tail Geckos are native to the savannas of West Africa.  Both types of gecko store fat in the tail and much confusion has existed since leopard geckos are called “fat tail” geckos by some people for this reason.  These two types of gecko are less closely related than one would suppose: taxonomically, they are part of the same subfamily (Eublepharinae), but belong to different genera.

The primary differences between them in terms of husbandry are the African Fat Tails’ need for greater humidity and their preference for insects over worms.  The need for greater humidity means that African Fat Tails can be more readily kept in planted vivaria (which helps maintain humidity), while leopard geckos are kept in more desert-like environments.  Leopard Geckos and Fat Tails should not be housed together due to this difference in humidity requirements.  If kept together, these geckos will attempt to interbreed but will not produce viable offspring.

African Fat Tails tend to be shyer and more reclusive than  leopard geckos. They are also more docile and will generally tolerate handling more readily. They frequently spend more time in their hides, often curled up together in small groups.

Leopard Geckos in the wild are born with a black and yellow banded pattern that breaks up into a black spotted pattern on a yellow background.  African Fat Tail geckos retain their banded pattern which tends to alternate between brown and tan, with less contrast than the Leopard Gecko bands. 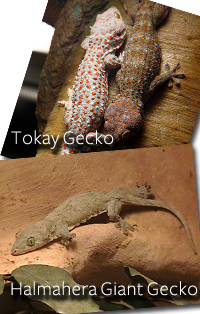 Both the Tokay Gecko (Gekko gecko) and the Halmahera Giant Gecko (Ghyra marginata) are large, active, arboreal gecko species.  Both species can grow past 12 inches in length, with the Tokay gecko being the second largest gecko species in the world, reaching just under 15 inches.  Both species are active nocturnal predators, and are quick-moving and agile climbers.  Neither species has eyelids, and each will feed on virtually any prey item they can catch and fit in their mouths.

Tokay geckos are some of the most beautiful geckos in the world, with a background of bluish to greenish coloration with some purple shading, covered with a varying pattern of red, black, blue, orange and white spots and markings.  The Halmahera gecko is somewhat more drab-colored with a base coloration ranging from greenish tan to dark brown, covered with a patterning of banding and swirls in darker browns, black, and white markings.  The Tokay and the Halmahera are both capable of a degree of color change, from very dark, almost black shades to very light, bright coloration.  Both species are capable of dropping their tails as well as giving a powerful bite for defense, with the Tokay having a more well-known reputation for this.

Tokay Geckos are widely spread geographically.  They are  found naturally in Southeast Asia, Northeast India, Indonesia, New Guinea and the Philippine Islands.  The Tokay has also been introduced to Florida, Belize, Texas, and Hawaii.  The Halmahera Giant Gecko has a more limited range, mainly found on New Guinea.

Care of these two species in captivity is similar, but there are a few key differences.  Halmahera Giant Geckos are omnivorous, and are very fond of Crested Gecko Diet, fruit-based baby foods, and mashed fruits.  They also appreciate sweet treats like honey.  Tokay geckos, although they have been documented to take Crested Gecko Diet occasionally, are primarily carnivores and prefer live prey items.  Both species will feed on various insect prey like crickets, roaches, superworms and meal worms.  Large individuals of both species will also take newborn pinky mice occasionally.  Both the Tokay Gecko and the Halmahera Giant gecko need large, vertically oriented enclosures that are heavily planted with varied hiding places available.  Either species does well when kept with a day time ambient temp of 82-86F with a 90F basking area available.  Tokays and Halmaheras will tolerate night time temps of the low to mid 70s.  A high humidity level (65-90%) is required for either gecko.

Neither Gekko gecko or Ghyra marginata appreciates being handled much. These two species are nervous, fast-moving geckos and are very wary of humans, who are viewed as predators.  Captive bred individuals of both species can be tamed to an extent with slow, careful handling and building of trust, but neither species is a good choice for someone who wants a gecko they can handle regularly.  Tokay and Halmahera Giant Geckos, once settled in, make fantastic display animals in large, naturalistic vivaria.  The Tokay gecko is extremely territorial, with the best groupings being male/female pairs. Introductions must be done carefully as not all animals are compatible.  The Halmahera Giant Gecko is virtually identical in this sort of social behavior; pairs must be compatible and multiple animal groups often fight.  Another difference between these two species is that the Tokay Gecko is an egg-gluer, while Halmahera Giant Geckos lay loose eggs, often on the floor covered lightly with substrate. 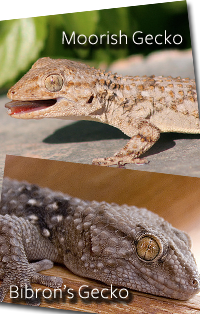 At first glance, the Moorish, or Crocodile Gecko (Tarentola mauritanica) and the Bibron’s Gecko (Pachydactylus bibroni) look virtually identical.  They are both medium sized geckos that range from 6-8 inches long, are stocky and drab colored with grey to brown shading and varying amounts of white, black and brown markings, are covered in tubercle scales and have angular, squat heads with large, lidless eyes.  Both species are fast moving, semi-arboreal animals that prey on a variety of insects.

The Moorish Gecko is native to the Western Mediterranean and North Africa, while Bibron’s Gecko is native to most of South Africa.  These geckos fill the same niche in the wild: they are found living on tree trunks, rock piles, and the walls of human dwellings.  Both species inhabit somewhat arid habitats, preferring dry, rocky terrain.  These geckos both lay single clutches of two hard-shelled eggs several times a year.  Either species will feed on invertebrates and small vertebrates.

In captivity, either species does well in warm, dry conditions with a variety of rock, cork bark, or wood structures.  Both will feed readily on commercial insect prey such as crickets, roaches and meal worms.  Both the Moorish Gecko and the Bibron’s Gecko are flighty and nervous animals, with the capability of biting to defend themselves as well as the ability to drop their tails.  Neither gecko species should be handled regularly.  The Moorish Gecko and Bibron’s Gecko are easy captives that adjust well to captivity in properly set up vivaria and will breed readily.  These geckos are highly territorial, and males will fight violently. Sexing can be difficult in both species, and is best done via examination of the ventral region by an experienced gecko keeper.

The similarity between these two gecko species is a major reason not to house these species together.  They occupy the same niche in a terrarium setting and will compete for territory and resources, and with the aggressive nature of these animals, stress and injuries are virtually guaranteed.

Aliza Arzt (who also contributer to this article) is a home care speech therapist living in the Boston area.  She has been breeding leopard geckos since 2005 and has recently been successful in breeding Coleonyx geckos as well.  Other interests which she pursues in her copious free time include work in ceramics, practicing aikido and surfing the internet.

Ted F. Cook II has had a life long fascination with animals, especially reptiles. His started keeping herps at age 5 with a pair of red spotted newts given to him by his grandmother. Over the years he has kept a variety of species, from Green Anoles to Monocled Cobras, but his true passion lies in the gecko world. Over the past 7 years he has limited his collection to several gecko species, including Leopard, African Fat Tailed, Bent Toed, Crested, Madagascar Leaf Tailed, and Tokay Geckos. He also keeps and breeds Amazon Tree Boas. He resides in Buffalo, NY with a menagerie of over 100 reptiles, a rat, a betta fish, and two incredibly spoiled cats. He is a small scale breeder of Leopard, Crested, and African Fat Tailed Geckos under the name of Tyrant Lizard Reptiles, and is working towards establishing captive bred lines of the more unconventional species that he keeps and loves.