In 1999 during one of my frequent visits to the East Bay Vivarium in Berkeley, Ca., I came across a group of geckos labelled as wild-caught Tropiocolotes persicus for $12 each. I bought a group of 6 after being told that they like it around 100ºF plus and dry. Needless to say, I eventually lost three of them to faulty husbandry information and lack of personal experience. After having discussions with other gecko keepers, I realized my errors in their care. They required a regular supply of water and a source of humidity. Soon after correcting this, they began to thrive. Eventually I had made up my losses with captive-bred newborns. In 2001 my wife joined the Army, and due to a military move, I grudgingly sold off my entire reptile collection.

Fast forward a few years, and a few more moves: I met a few fellow gecko enthusiasts while my wife was stationed in Germany. During a discussion about species that we had kept in the past, I mentioned Tropiocolotes persicus. You would have thought that I had mentioned the Holy Grail! Many of the fellow hobbyists I was talking to had only seen them in books or the internet and were very interested in finding a source for them. This piqued my interest in re-acquiring them! 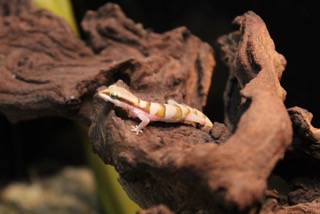 Last year I moved back to the U.S. and was on a mission to rebuild my collection of reptiles, and geckos in particular. One of the species on the top of my list was, you guessed it, T. persicus! Well, after doing some good ole’ fashioned Google research, I discovered that T. persicus was actually Microgecko persicus. After more research, I discovered that they were very hard to find in captive collections. Due to the wonders of the World Wide Web, I was introduced to Jon Boone, and here is where my quest for the Holy Grail takes a most interesting twist.

Soon after “friending” Jon Boone, I received a message from him with a list of geckos available before he headed to the infamous Tinley Park Reptile Show in Chicago, IL. On this list were more interesting species than my credit card limit would allow, but somewhere in the middle were 1.1 adult captive-born Microgecko persicus euphorbiacola! Without even thinking about the cost, or what my supportive wife would say, I sent Jon an email confirming that I absolutely wanted them! Keep in mind that they were much more than the $12 each I had paid for the so-called T. persicus many years before. After exchanging a few more emails with Jon, I discovered that he was going to be traveling through my area in the next few weeks. So not only was I going to pick up my captive-born M.p. euphorbiacola, but I was also going to get a chance to meet Jon Boone. I spent less than 30 minutes with Jon after meeting him at the airport, but I realized that this man is a living encyclopedia for all things pertaining to geckos.

After getting my M.p. euphorbiacola settled, I began a correspondence with Jon. He explained that they live in a harsh environment in Pakistan and are often found in Euphorbia caducifolia, a latex producing succulent plant that helps them maintain adequate humidity, provides shelter from the tough environment and protects them from predators. He stated that they needed a steady 90ºF and access to a regular source of humidity in order to breed. Jon also mentioned that the males will vocalize in order to attract females. This is when I started to realize that what I had acquired back in 1999 was probably not M.p. euphorbiacola, but actually a true Tropiocolotes ssp. I do not recall my males ever vocalizing, and yet, despite my lack of knowledge and experience, I somehow managed getting my unknown Tropiocolotes ssp. to breed? Needless to say, I was fascinated with my new species. After only three nights in their new enclosure, the male began vocalizing, and I was able to record it! I’ve always been interested in vocal geckos such as Pachydactylus scutatus and Cyrtodactylus peguensis zebraicus, which were also favorite species from the past, C.p.z. being much harder to come by now as well. I quickly became captivated with my M. p. euphorbiacola, and after a million questions for Jon Boone, I learned that due to the War in Afghanistan and the subsequent lack of wild-caught exports from that region, only 5 to 6 people worldwide were currently working with them. Jon had bought one of the last groups to come out of Pakistan in 2005 and had done well with them, but many of the captive-born offspring that he had sold did not do well, despite the care advice given to their new owners. Very sad news indeed.

I’ve always strived to keep my geckos in display enclosures that are as true to nature as possible, not that I have anything against large scale breeders that keep their collections in sterile breeding enclosures. This is just the way I like to keep my small personal collection. With this in mind, I found a cloth and plastic plant in a local craft store that closely resembles the structure of Euphorbia caducifolia. They spend most of their time in this plant and the male uses it as a nocturnal perch to call for the female. Their enclosure is a 12″x12″x18″ Exo-Terra with construction grade sand as a substrate. I’ve added a piece of aquarium hardwood and a small water dish with several small rocks in it, which I fill just halfway to prevent drowning. I’ve also added a small plastic hide where I keep damp sphagnum moss to provide humidity, and, taking Jon’s advice, I spray them nightly to help maintain a steady humidity. 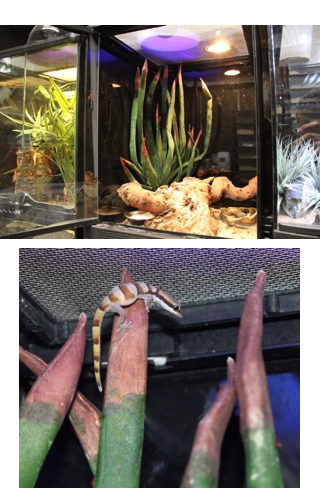 I use one xenon puck light for lighting and daytime heat, and a 50 watt moonlight lamp for an added day and night heat source, as well as to provide enough illumination to view their nocturnal activities. I keep the xenon light on a digital timer. I feed them a combination of flightless fruit flies (Drosophila hydei) and 1/8″ crickets that are dusted with calcium and D3. As per Jon’s advice, I also provide a small bowl of egg shells, which I grind into a powder using a mortar and pestle. About a month after picking up my pair from Jon, I noticed that my female was gravid! Jon informed me that they only lay one large egg, and that it is best to incubate the egg in situ to prevent damaging the egg during retrieval. Speaking from personal experience, for a gecko that barely exceeds 2″, the egg is proportionally large.

What I have learned from this whole experience is that captive breeding and sustaining our captive populations is vital! With ever expanding habitat destruction, regional turmoil, and limited wild populations, many species once taken for granted may no longer be ethically collected and/or face extinction. I see the hobby doing amazing things with species such as Correlophus ciliatus a.k.a Crested Geckos, which were once thought to be extinct until rediscovery in 1994. Yet many other species, once readily available, are falling into neglect in private collections. Many of the species from Madagascar are now mass-imported but face extinction in the very near future. For me this decades-long journey to reacquire a long-lost species has definitely brought a deeper appreciation of Microgecko persicus euphorbiacola, and all things gecko!

Philip Patton’s fascination with reptiles, like most reptile enthusiasts, began at a very
young age. He started with catching Box Turtles, Corn Snakes and Anoles in Fort Benning, Georgia, at the age of 12, and progressed to keeping and breeding colubrids, arboreal boids/pythons, and geckos. In recent years he’s primarily focused on tri-colored kingsnakes, milksnakes and geckos. He enjoys working with uncommon species in his collection, with a goal of producing them in captivity to prevent over collection of wild populations, and to maintain these species in captivity so they will be available if they are no longer in the wild. His other hobbies are kayaking, fishing, and of course, fishing from a kayak!