More and more hobbyists today are keeping or thinking of keeping Lygodactylus geckos in their home.

Lygodactylus is a genus of geckos with 60 species and 34 sub-species. Lygodactylus rarely exceed 4 inches. Due to this they are commonly referred to as Dwarf Geckos or Dwarf Day Geckos based on their diurnal nature. The most popular one being kept in captivity currently is Lygodactylus williamsi. Many people cannot resist the male’s bright blue coloring, including me. The females usually are an olive green, but sometimes they also have a bit of the blue coloring as well.

It should be noted that many of the Lygodactylus williamsi kept in captivity today are wild caught. Because of this many people are still perfecting their husbandry techniques which is why you may not find a lot of information (at least in English) about them throughout the Internet or in books.

Because most Lygodactylus williamsi are wild caught, you should have a quarantine terrarium setup before placing them in their permanent terrarium as with any other new animal. Quarantine should last for a period of two months. During this time you will be able to combat any possible problems with the help of a licensed herp Veterinarian. 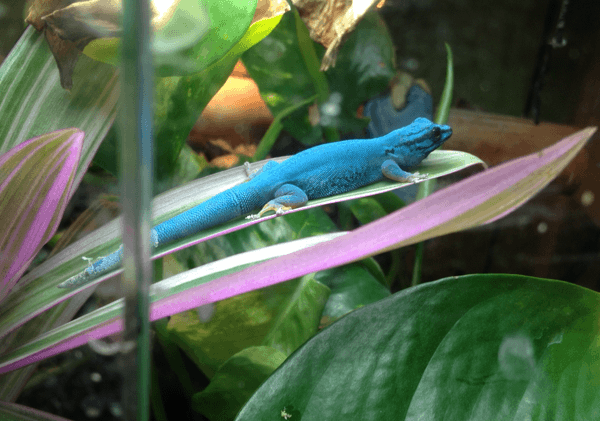 Due to their small size, their terrarium does not need to be too large. The majority of people in the USA keep them in 20-25 gallon terrariums orientated vertically. Because they require UVB (some even say it is very crucial to their survival in captivity) you will have to modify your terrarium a bit to allow for the passage of UVB through the top. They should be provided with a UVB lamp in the 5.0 range. A daylight tube or compact bulb should also be provided, as Lygodactylus williamsi are sun worshipers and love bright light. Heating can be achieved with Halogen puck lights.

Lygodactylus williamsi do best with a humidity level between 50-80% (naturally increasing at nightfall), which is easily achieved by a daily misting. Their temperatures range between 75-80F throughout the terrarium during the day. The basking area only may reach temperatures of 90-95F safely.

The walls of the terrarium should be decorated with cork bark. Other decorations may include cork branches or tubes for climbing; you may even add some Liane jungle vines in. Lygodactylus do best with sand/soil mixture. There is a lot of debate as to the planting of Lygodactylus terrariums. Some believe artificial plants are best because they are easiest to keep clean, but personally I, amongst others, have found they do best in enclosures with lots of live plants. Live plants also help to keep the humidity levels up. Read our primer on for planted vivariums for suggested plants to use.

Lygodactylus williamsi will eat various insects. I feed mine a varied diet of Musca domestica (Curly winged fly), Trichorhina tomentosa (Tropical woodlice), Drosophila Hydei (fruit flies), and crickets to name a few. All food is dusted with the appropriate supplements at each feeding. Once a week I provide my Lygodactylus with a meal of Repashy CGD. I do not provide my geckos with baby food. A bowl of crushed up cuttlefish bone is available at all times during the breeding season and replaced once weekly with a fresh bowl. This will help give females the extra boost of calcium they need for laying eggs and staying healthy after doing so. Between March and November (breeding season) they should be provided with 12-14 hours of daylight, with 10 hours in the winter months. It should be noted that Lygodactylus may not follow along with your idea of stopping them breeding for a few months, so you may need to separate them during the winter months to allow the female to regain her strength for the next season.

Lygodactylus williamsi should only be kept with one male per terrarium. You may be able to keep two females with your male, however some have trouble in doing so. Also due to their profilic nature, you may really only wish to keep them in pairs or you will have an abundance of babies on your hands.

Watch for part 2 of this topic about how to breed L. williamsi coming next month.

Born and raised on Long Island, New York, Maureen Winter has been keeping reptiles and amphibians on and off since the age of 7. Her first reptile was a Red Eared Slider. Later on she kept various amphibians ranging from Hyla cinerea to Litoria caerulea and was quickly hooked. Eventually Maureen moved to Münster, Germany and longed to have her beloved amphibians once again. She began with Litoria caerulea and her hobby grew to keeping various species of dart frogs. After a year of owning dart frogs Maureen desired to have some geckos and soon her first geckos, Phelsuma klemmeri, were purchased. Shortly after, she began keeping many different geckos. She currently works with various Pheulsuma, Lygodactylus, Sphaerodactylus, and Lepidodactylus lugubris, alongside her many frogs