As more and more people acquire Lygodactylus williamsi the desire to breed them naturally grows as well.

Conditioning begins during the quarantine period, which is best done separately so no accidental breeding occurs.

During quarantine you should offer plenty of food, depending on the weight of the gecko.  This is best done in small amounts every day or every other day for the first few weeks. In this way, you will be able to provide them with a lot of nutrients from a balanced variety of insects, alongside a trusted supplementation regimen which will be beneficial come breeding time. Once you notice your geckos have a healthy weight you can begin to reduce feedings.

During conditioning you should provide your female gecko with a small bowl of crushed up cuttlefish bone. This will help provide her with the extra calcium she will need to produce healthy eggs and stay healthy after doing so. The bowl generally should be replaced on a weekly basis. You should also take care not to place the bowl in the range of a misting area! Doing so will mean you have to replace it more frequently because the nutrient value will be lost otherwise.

It should be noted that the bowl of crushed up cuttlefish bone should be offered in addition to the usual calcium you provide while supplementing their food, as sometimes they will not take from this bowl until they are actually pregnant or generally not at all. Still it is good practice to offer it regardless!

It is also a good idea while your geckos are in quarantine to have a fecal sample checked by a licensed veterinarian in order to nip any potential parasite loads in the bud before they pose an additional threat to the condition of your female, prior to breeding her. Failure to do so could cause an increased load once she begins breeding as stress has been shown to make parasite loads higher and breeding does cause stress.

I have come across many threads in forums and posts on mailing lists where females were not allowed to be properly conditioned prior to breeding and the outcome was not pleasant. So following the above care regimen will not only spare you a headache or two, but most importantly spare your gecko or its offspring any harm.

Once quarantine is over you can begin introducing the two geckos together. It is best to place the female into the enclosure first and the male an hour later. Once the male is placed into the enclosure they will usually tolerate each other well within a few minutes. Sometimes there will be a bit of fighting, but this should pass within a few days. You only need to worry if they keep fighting. Should this occur you should remove the male for a few days or more and then try again.

After a successful introduction your geckos will freely begin breeding without any extra effort from you. Be sure to keep a bowl of crushed up cuttlefish bone handy in the tank at all times.

Lygodactylus williamsi generally like to paste their eggs. A nifty trick I use is to place plastic florist tubes within the tank in various locations that would look interesting to the female. They could be placed, for example, behind bromeliads, behind pieces of cork and up towards the top of the tank. These tubes should be placed in to the vivarium before adding in the female. This is important as doing so later may cause her to not recognize them as possible egg locations prior to becoming gravid. These tubes are of a size to not only allow your gecko to enter and leave easily, but also small enough so that you can just take them directly out of the vivarium once a clutch of eggs is laid to place them in to an incubation location.

Note: Sometimes my female does not select a site I have set up for her and
I end up having to catch some babies from the tank. This is easily done by catching them in a small cup or tube (remember to approach slowly!). Babies should never be allowed to remain in with the parents as there is a possibility they may be eaten.

Incubation and Care of the Young

Once eggs have been laid it can take anywhere from 50-100 days for the eggs to hatch depending on your incubation temperatures. I mention the large span because as seasons change so will the amount of days it takes to hatch out offspring.

I usually incubate my eggs between 72-81F (with the lowest number being at night) and have found these temperatures to be fail-proof in producing healthy hatchlings. Following this range my eggs hatch between 50-80 days throughout the year.

On the day your eggs hatch you can place the offspring in  a terrarium you have set up prior to their arrival. It should be set up like the parents’ enclosure (see previous article another link here). It is also very important to provide them with the same 5.0% UVB as their parents. UVB is crucial to the raising of young Lygodactylus! You can safely raise them in 5-15 gallon enclosures.

Be sure that they are escape-proof, as the young are very tiny and devious.
The same temperature guidelines as their parents should also be followed. Due to their small size, a water bowl should not be placed in to their terrarium as this may lead to drowning. Drinking water is safely provided by daily misting.

On the second to third day of life you can begin offering the young food
items. They will usually only take small drosophila (fruit fly) the first days, but may also take pinhead crickets, springtails, woodlice & small firebrats.

At an age of 6-8 months it is usually possible to sex the offspring. But some may be able to be sexed as early as 3-4 months. 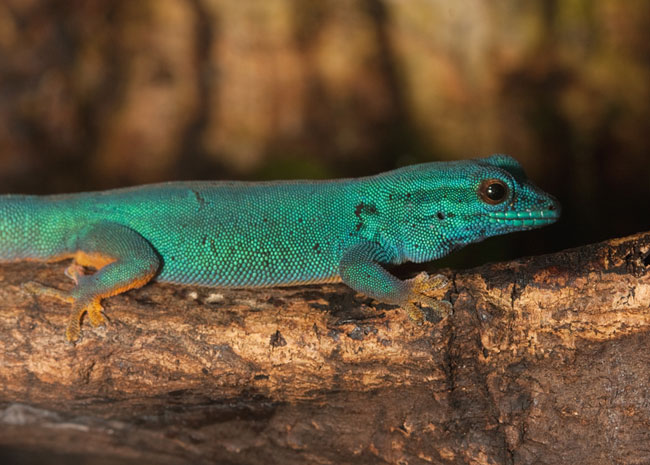 Born and raised on Long Island, New York, Maureen Winter has been keeping reptiles and amphibians on and off since the age of 7. Her first reptile was a Red Eared Slider. Later on she kept various amphibians ranging from Hyla cinerea to Litoria caerulea and was quickly hooked. Eventually Maureen moved to Münster, Germany and longed to have her beloved amphibians once again. She began with Litoria caerulea and her hobby grew to keeping various species of dart frogs. After a year of owning dart frogs Maureen desired to have some geckos and soon her first geckos, Phelsuma klemmeri, were purchased. Shortly after, she began keeping many different geckos. She currently works with various Pheulsuma, Lygodactylus, Sphaerodactylus, and Lepidodactylus lugubris, alongside her many frogs