Viper geckos, the tiny natives of Pakistan with the black and white ladder pattern, have become increasingly popular recently.  They are relatively easy to keep and, because of their small size, don’t require much space.  They were originally in the genus Teratolepis, which was later merged with Hemidactylus.  The viper gecko keepers in this month’s article range from experienced breeders to a novice keeper to a former viper gecko keeper.

As usual, the three V iper gecko keepers have responded to the following questions:

We keep the normal wild types of viper geckos.  Except for a lighter and a darker form, as far as we know there are no morphs.

They are now considered Hemidactylus for sure since the genus Teratolepis no longer exists. As much as we also think they don’t really fit to the profile of most species of Hemidactylus, they also show some obvious similarities like the compressed snout, etc.., and we do believe that Bauer knew what he was doing when he merged the two genera. We are far from taxonomy specialists ourselves so we are not going to argue with him over that matter.

We got our first viper gecko kind of by accident.  We were visiting a local breeder to purchase a crested gecko and he also had a single sub-adult male viper gecko for sale. We didn’t know very much about them but instantly fell in love with the cute little thing and decided to also take him home. Soon after that we bought another trio of them so we had 2 couples. At this time we have 2 males and 3 females and are trying to trade some of our own female offspring with some other females to get some new bloodlines into our breeding project.

At this moment we have 3 seperate enclosures for them. Each of the males each has his own 10 gallon converted fishtank and the females have a custom made 20 gallon terrarium.They all have a heat bulb and with the females we also use a 5.0 UVB bulb. Although they are nocturnal we sometimes see them catching some sunlight during the day. With most of our animals we try to set up their enclosures as naturalistic as possible. We use sand and rocks for substrate, some pieces of wood and bark we collected in the forest to provide shelters and some fake plants to add some green to it. At first we also provided a laybox for the females but they hardly ever used it; they like to lay their eggs in the sand under a piece of bark instead.

They are very fun animals to work with; we love to see them hunt. They are really good at it and they prey on almost everything that they can fit into their mouths. We also like the fact that they are small so they don’t take up very much space in our always too small reptile room. Besides that, there is  also the fact that they seem to be more rare in captive collections then they used to be which makes them more interesting to work with in our opinion.

The biggest challenge in working with these species for us has proven to be raising the babies. They are so very small and fragile when they have just hatched that it is very difficult to handle or help them with a bad shed or something like that.
After a week or so some of them also just seem to die for no reason. We believed it had something to do with the incubation so the year after we decided to try another method with the eggs in a smal bottlecap lifted off the slightly wet incubation medium. This seems to have helped but the survival rate is still not as high as we had hoped for. That being said we still think they are a highly entertaining, fun and rewarding animal to work with.

I am currently keeping a standard viper gecko, as I’m only currently aware of this colour and patterned viper gecko existing although I have seen a breeder recently upload of picture of a few darker looking baby viper geckos which I imagine he will hold back to see if this can go further. If viper geckos were to be morphed as other geckos my interest in them would peak a lot more. 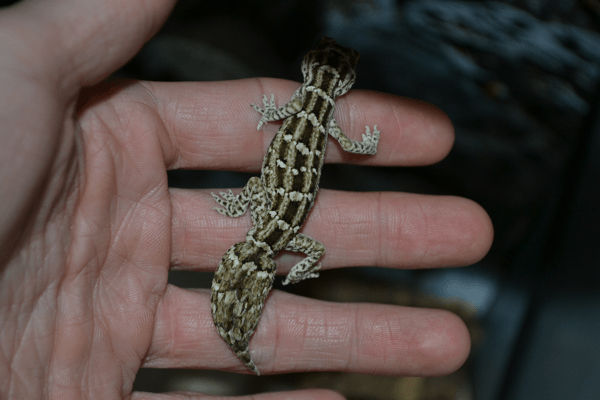 What got me interested in these little guys was their care, size and looks, as they don’t need much space nor too much equipment. It was mostly luck that I got my viper gecko as I knew nothing about them until someone in my local area was selling one for £40 ($65). Otherwise I wouldn’t have gone out my way to get one, once I had seen the picture of it (he was too young to sex at the time). I knew I wanted him badly so I took a crash course in their care and bought him.  He was tiny at only 1 gram; he is now 5 grams.

As I only keep the one, he is set up in a 30x30x30 (12″x12″12″) exo terra although I’ve been told I could keep a few more in there. When I first got him he was on paper towel and once he was older I put him on calcium sand but my paranoia of him getting impacted was too much and after 5 days I took him off it.  He is now on floor vinyl/lino. The sand looked amazing but this is not worth the risk at all in my eyes with any species that can be “kept” on it.

He has a cold hide which is a coconut hide and his hot hides are cork bark which he loves to sleep on top of in the early hours of the morning. He has a  moist hide and a fake plant in the middle which I have often seen him curling up in.  He has a little water bowl big enough for him to have a soak in if he wants, but easy to get out of.  I give him a little bowl of calcium dust so he can get it when he needs. He doesn’t have a food bowl as I free- feed him.  A lot of people feed crickets but they can bite. I have my own colony of lobster roaches so he gets 2-3 put in every 3-4 days and he loves them.  For heat I use a UTH set to 30-33C On the hot side which covers just under half his tank.

What I find most interesting is the size, speed and patterns of vipers.  I love how little room they take and how little they actually are.  Their speed is unbelievable when they want to move.  Their patterns are absolutely beautiful, nothing like I’ve seen on anything else!

The thing I find most challenging about them is also what I love the most: their size and speed. Their size makes them not an easy gecko to handle as they’re small and fragile so I tend to keep handling to a minimum.  Also whilst handling them if they deicide to run, there’s not much chance of catching them as they’re faster than you can see. I don’t know if
this is just mine but he isn’t very keen on coming out if I’m up and around. I very rarely see him doing much as he is very shy and I have no idea if he is WC or CB. I have been told they don’t do well by themselves and do better in groups. I will test this theory after Christmas.  Other than their speed and size they are easily one of the best geckos to keep as their care is not as demanding as other geckos.  I find their care to be very similar to leopard geckos. 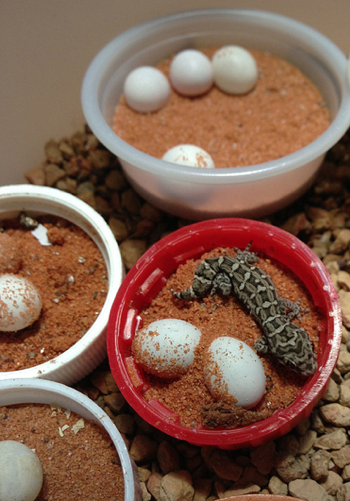 I previously kept a mixed bloodline breeding group of viper geckos. In my experience, there were no morphs. Animals would often change from light to dark based on mood, temperature, and health.

I started keeping viper geckos 8 years ago and had groups on and off until about 3 months ago.

Over the last 8 years keeping viper geckos has changed drastically. When I first started breeding babies would go for $10-20 each and we still had young bloodlines in the US from imports in the last few years. Our dispute with the middle east picked up and imports stopped, even through indirect countries; the gene pool became limited. Over the last five years popularity decreased, some mass producers stopped breeding, and the availability plummeted. When demand rose there was a substantially limited gene pool and offspring had a very high die off ratio. The current challenge this species faces is the need for new bloodlines in the US, which has been tackled by some folks like Jon Boone importing new lines from Europe. The challenge is finding new lines to import, since the popularity the viper gecko sees in the US is not often reflected in other markets. Also, the price of importation limits small to mid sized breeders from making the investment.

Outside of limited bloodlines, the second challenge breeders and keepers often face is a limited lifespan. Small geckos are often subject to high production and short lifespans. When a female lays a clutch every two weeks for six to eight months out of the year, it quickly depletes calcium and fat reserves. In my experience, females will only breed for two seasons before shutting down and eventually passing. For that reason, males often make better pets due to their longer lifespan.

These geckos make wonderful additions to a collection for a number of reasons. The ability to keep multiple males in a group makes watching interactions fun. For such a small gecko, they pack a load of personality. My group often would come up to the glass and check me out as I fed geckos. I even had males who would throw up their tails when friends with a beard would peer in the cage.

I kept groups of 2.2 to 2.3 in a 20 gallon “low”. These custom aquariums are only about 3-4 inches tall. While vipers can climb glass, making it essential for their enclosure to be covered, they do well in a sand covered floor area and do enjoy climbing on “furniture” in their environment. My females would lay eggs under a hide on the cool side, off the heating pad. I’d use a spoon to move the sand and carefully pick up the fragile pea-sized eggs.

Jordan Millard, 21, who lives in England UK, currently keeps one viper gecko and plans to hopefully breed them in the near future once he knows a little more about them. He also is a keen keeper of leopard gecko and mantis, and is planning to breed his leopard geckos.

Kevin and Tamara are private hobby breeders from Belgium. They are 33 and 27 years old. Their main focus has been on geckos for a little over 3 years now but they have kept reptiles and amphibians since their early teens. Most of their collection are species from Madagascar, Australia and New-Caledonia but they also keep some other, mostly Asian and African species. When they are not working with reptiles they enjoy travelling and exploring new cultures, riding motorcycles and playing darts.