Usually, we don’t notice a gene until a mutation changes it.  This is true for the vestibular system of Leopard Geckos.  Around 2006 certain leopard geckos began to display equilibrium deficiencies, often (but not always) associated with the Enigma morph.  These disoriented geckos were diagnosed with a disorder dubbed Enigma Syndrome. 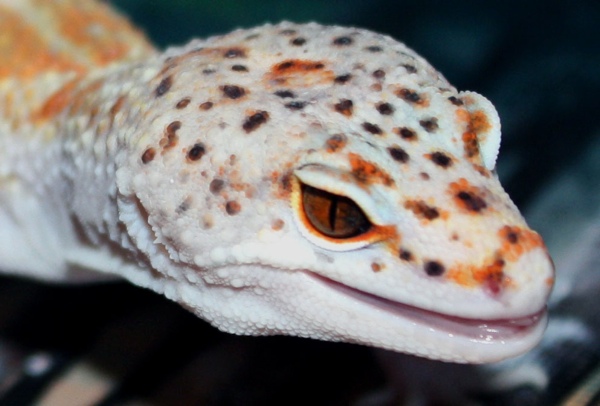 Enigma Syndrome (ES) is a neurological disorder that affects the balance and cognition of leopard geckos.  The severity of this genetic mutation varies from relatively mild symptoms, such as: ‘star gazing’, head tilting, and occasional circling to debilitating effects such as: seizures, ‘death rolls’, and incessant circling in place (similar to diagnostic symptoms in autistic individuals).   Affected individuals with the same mutation will manifest different degrees of severity of this disorder, because of environmental factors and their individual genotype.

Environmental stressors such as bunking with an aggressive cage-mate, being vacuumed up by a distracted breeder, or just the normal rigors of shipping can be enough trauma to activate this syndrome.  Enigma Syndrome is a misnomer, as all morphs are susceptible to this disorder; however, it is more prevalent in the Enigma morph.  Balance disorders seen in non-enigma morphs may, in fact, be one and the same disorder. 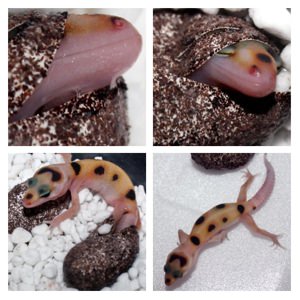 How is it inherited?

I will preface the following declaration by saying this is my opinion, based on scientific investigation and collaboration with experienced breeders who have produced thousands of enigmas.

There are 19 pairs of chromosomes in a normal leopard gecko cell.  Each animal has two copies of each gene, called alleles. Just one copy of the dominant allele is sufficient to manifest symptoms. Enigma Syndrome is inherited in an autosomal dominant pattern. Those affected are either heterozygous or homozygous dominant. In other words, allele A causes the disorder, so those who are AA or Aa are affected.  Homozygous recessive animals, aa, are 100% normal, as they do not carry the mutant allele, and cannot pass it onto their offspring.

The majority of leopard geckos that are affected are heterozygous, Aa.  This is because, in many cases, the homozygous dominant genotype, AA, is lethal and usually results in the miscarriage of an embryo.

Every affected animal has an affected parent.  If one parent is a heterozygote, the babies will either inherit the gene or not [Fig 1.] (50% chance of inheritance).  Both males and females are equally likely to inherit the mutation and be affected.  This is because leopard geckos do not have sex chromosomes, so these genes are located on autosomes (non-sex chromosomes). 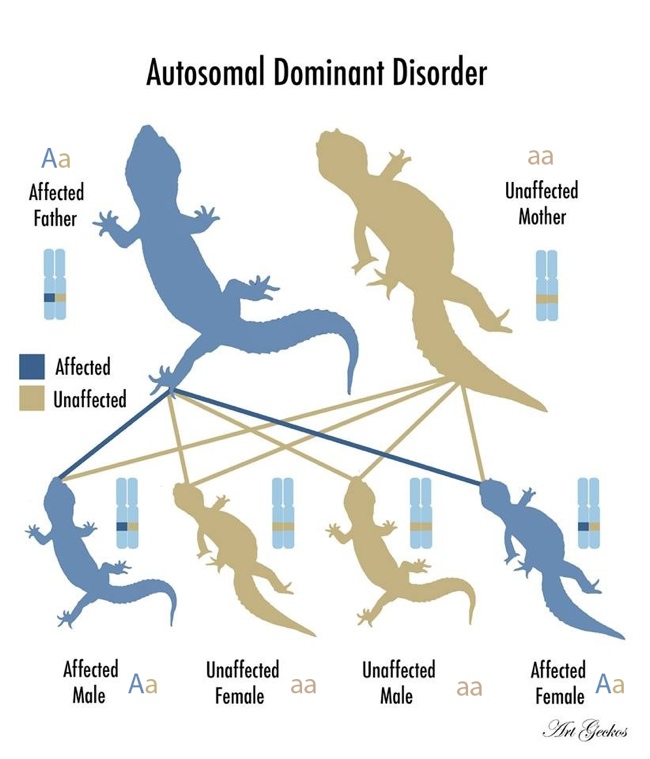 So, what’s really going on within these equilibrium deficient reptiles?

There are many different types of mutations, but one possible explanation for a disruption in this ES gene is a loss of function mutation, where ES affects brain cells responsible for coordinated movement.  Because one copy of the gene is nonfunctional, it produces proteins that are misfolded, such that when they interact with normal proteins they clump up and lead to a toxic disruption of structural organization. Cells can no longer function normally, cell death occurs, and parts of the brain are destroyed.  This is very similar to Huntington’s disease in humans, which is an ‘expanding triplet repeats’ mutation.  This means the normal gene is packed full of additional CAG repeats, leading to the production of a non-function protein. Again, this is just one of hundreds of possible explanations; until further investigation is done, this will remain an “enigma”.

Often, ES is a late onset neuro-degenerative disease.  So you can outbreed a normal enigma, only to later find out they are affected, and the mutant gene was passed to the offspring.  Moral of the story: Only breed unrelated, ‘unaffected’ individuals, and outbreed to a different population of genes.

What led to this conclusion?

There is a great deal of research yet to be done, as detailed elsewhere in this article.  Consequently, we are at a stage where a hypothesis has been made and needs further testing. I am working with a coalition of breeders whose website is under construction at Gecko Genetics.

What we are fairly sure of, based on breeding and careful record-keeping, is the following:

The disorder behaves as if it is linked to the enigma gene, meaning the two genes are likely located very close together on the same chromosome, such that when crossing over occurs, it’s unlikely the two genes will be separated onto different chromatids during meiosis.  This would explain the strong correlation between the enigma morph and the ES gene.

There are, however, unaffected enigmas. Only symptom-free enigmas are bred here at Art Geckos.  We outbred an ‘unaffected’ (no signs of ES by 1yr.) female enigma to a different population of genes, and produced 12 healthy animals, 7 of which are enigmas.  The mother remains unaffected and shows no symptoms of ES.  All of her children behave normally, and are so far unaffected.  We also outbred an ‘unaffected’ male enigma, and produced 6 enigmas; a couple of these babies do display signs of ES, so the father must be a carrier even though he hasn’t developed symptoms yet (these animals are now retired as pets). This supports the idea that this is a dominant disorder. 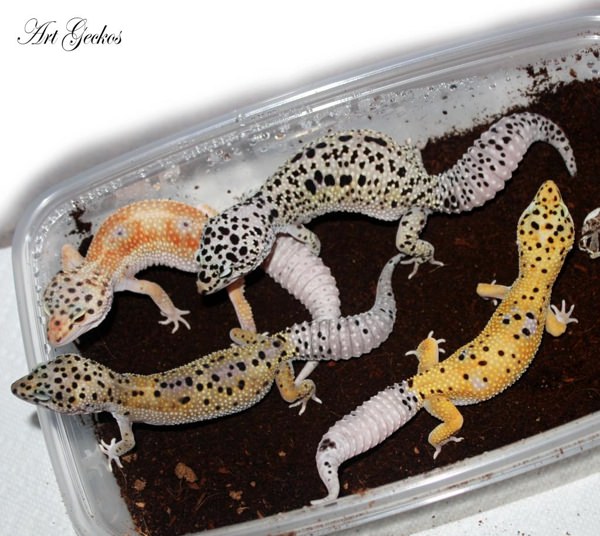 How to solve this problem?

For those animals already affected, there may be some rational solutions available, such as clinical trials of anti-epileptics.  The ultimate goal is to avoid producing abnormal animals, which means we must identify carriers of the ES gene.  Of course, the only way to verify that an individual is not a carrier, and truly unaffected, is by whole genome sequencing.   Finished in 2003, ‘The Human Genome Project’ took 13 years and over one billion dollars to complete.  Today this can be achieved in an afternoon for a few hundred dollars. The times are a’ changin’ folks, and this same biotechnology can be utilized to screen each potential breeder for a mutation and determine their risk factors.  This way every breeding project will begin with guaranteed normal foundation stock.  Additionally, we can track other inherited traits and determine the genetic antecedents.  This would eliminate the need for test breeding animals to determine their genotypes and provide precise information about an individual’s lineage.

To sequence an animal’s genome, a sample of the animal’s DNA is collected (in the form of shed, blood, or embryonic fluid, etc.) and sent to an appropriate certified lab. DNA is extracted from the cells and hundreds of copies are made so there is enough DNA to analyze. The genetic material is pipetted onto a DNA chip, incubated (so the DNA attaches to the chip), and the chip is read by a computer, revealing the genes at play.  The first step is to sequence the genome of a healthy wild-type leopard gecko.  This will provide the normal genetic markers against which other morphs can be compared.  Any mutation (morph) can be sequenced using this method.

It is my opinion, based on research and results, ES is an autosomal dominant disorder.  It is not autosomal recessive, and it is not an X-linked disorder (as leopard geckos don’t have sex chromosomes)
To pinpoint the exact problem, three things need to happen:

The first two items will require necropsy of multiple affected animals, while the third item is a straightforward series of laboratory tests.  To achieve these goals “The Coalition of Health & Genetics for Leopard Geckos” has recently been established. This collaboration of breeder brains, working with geneticists, should lead to a consensus description of what exactly is going on, so we can eliminate the problem.  Not only is it technologically feasible, it is an ethical necessity to produce healthy, well-balanced leopard geckos. 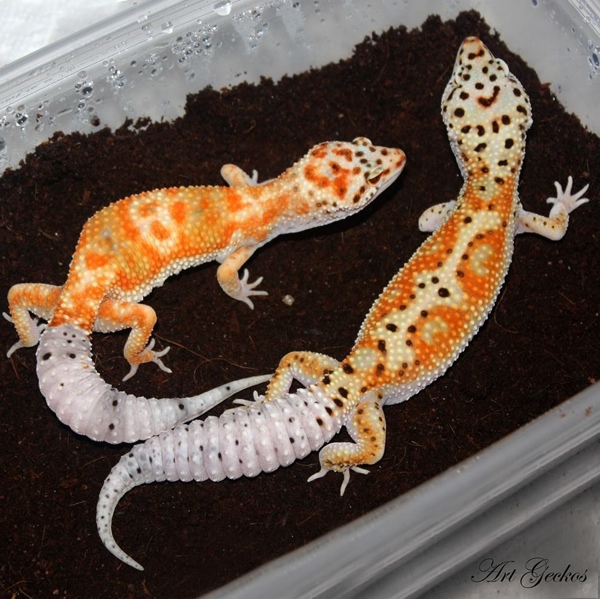 Ben Bargen is the owner of Art Geckos in Reno, NV. He has owned leopard geckos since 2003. He recently graduated from UNR with a bachelor’s degree in neuroscience. His background and passion is in medical research. Ben enjoys logging hours backpacking, mountain-biking, and snowboarding in the Sierra’s. www.facebook.com/ArtGeckos.Ben