Originally known as Teratolepis fasciata, the genus Teratolepis was abolished due to the fact that the whole genus consisted of only two geckos: Teratolepis fasciata and Teratolepis albofasciatus. Teratolepis was originally established by Gunther in1869 because he considered them to have a ‘bizarre scalation’. Recently, in 2008, they were reclassified by Bauer as Hemidactylus imbricatus. The Hemidactylus description better describes the genus, though the new name has caused much confusion in the reptile hobbyist community. Those being just the Latin names, I should also mention a few of the common names, the most common being “viper gecko”. They are also known as “carrot-tail gecko”, “carrot-tail viper gecko” and “leaf-toe” or sometimes even “leaf tail gecko”. The latter is one that causes a lot of confusion since geckos of the Uroplatus genus are commonly known as “leaf tail geckos” (e.g. Satanic Leaf-tails”). 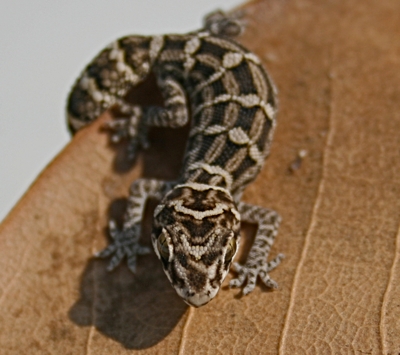 It was almost by accident I ended up with my first three viper geckos. I was downsizing my large breeder collection of crested geckos and was contacted by someone looking to trade for some of my animals. We worked out a trade and I ended up with a gargoyle gecko female and two adult female viper geckos. I had never seen them in person and the day the box arrived I was ecstatic. They were much smaller than I expected and so cute, looking at me in their deli containers, blatantly just as curious about me as I was about them. On the way home I had to stop in at the local pet store to pick up some smaller crickets for them and took them into the store with me. My new little critters got so many ‘oohs and awws’ by the store owner and some of the regular customers who had no idea what they were. I found myself giving my first care lesson on them the first day I had them. Thank goodness I had gotten a very detailed list of care requirements from the old owner before they arrived! Not a month after I received them I was contacted by a friend who had a male asking if I could take him in because she was moving and less than 2 weeks later I had my first 1.2 breeding group. 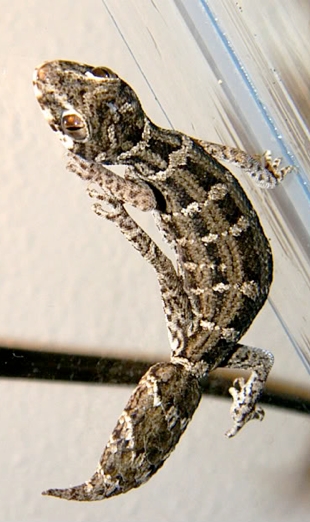 All the name confusion aside, these geckos are extremely fun and entertaining to keep no matter what you want to call them. They are curious critters with lots of energy. Though described as terrestrial, they do have lamellae on their toes that allow them to stick and climb, even glass walls. Mostly you won’t see them doing this but believe me they do! Always interested in new things, viper geckos almost seem to be fearless, hunting anything they can fit into their mouths. While hunting, they exhibit tail-waving and an almost bull-dog like stance. It’s amazing how much they can and want to eat. I feed mine every 2 to3 days and the adults will eat up to eight 2-3 week old crickets and sometimes beg for more. I have no idea how they pack all that away. It’s very amusing to watch.

While about 10 years ago viper geckos were very popular and were imported wild-caught in high numbers, the captive bred community has dwindled. I have not heard of any other shipments arriving in the U.S., in recent years. Most likely this is due to the problems in the Middle East. Unfortunately the captive bred population seems to be dwindling because hatchlings have a high mortality rate but the cause is still not clear. Hatchlings will do well for a week to a month then just seem to waste away for no apparent reason. Some seem to have a bad shed as the first symptom and then crash. It’s my suggestion to raise all hatchlings for 8 or more weeks before selling them to ensure good health. It’s best to also avoid buying juveniles younger than that. Some breeders seem to think the failure to thrive is because of past line breeding in the blood stock; even more seem to think it has to do with incubation. Personally from speaking to many other breeders working with them I find it seems to be a mix of the two. Hopefully in the next few years we can pinpoint the exact problem. Until then it’s my hope to collaborate with other experienced breeders and help solve the mystery. 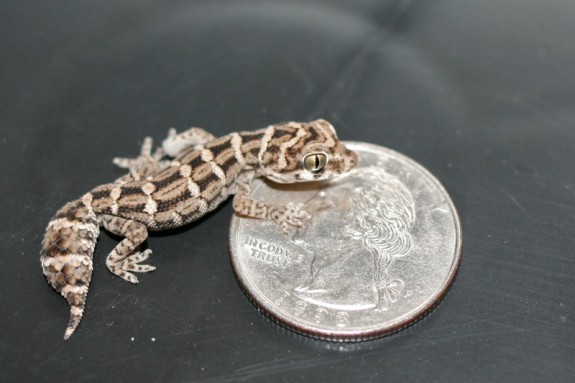 As I said before, viper geckos are small, being about 2 inches SVL as adults though hatchlings are extremely small. I never have bothered to try and get an exact hatch length but one will fit on the top of my thumb nail with room to move. I have tried to get weights on them at hatch and they don’t even register on my gram scale that reads to the 10th of a gram! You’re most likely wondering what I feed them. So was I when I first saw the size of the eggs. Luckily I found some hydei fruit flies and raised the hatchlings on them for the first two weeks, then offered them a mix of other small feeders, mostly crickets, dubia raoches and the occasional mini mealworm.

I feel viper gecko groups of more than 2 need the space of a ten gallon tank. Singles or juveniles can be housed in shoe box tubs but bigger is always better. For bedding you have many options but sand is not an option in my opinion as a viable substrate. They are from Pakistan so people seem to think sandy desert. Not really. The areas they are from seem to be mostly rocky deserts. In the wild they make day-time hides beneath rocks to avoid the heat but sometimes like to come out to bask. A sandwich size Tupperware container with a hole in the side filled with a sand and dirt mix makes for a good hide and lay box. I use a UTH and a blue or red bulb to heat the warm side of the tank. Ideal temperatures should range from about 95F on the warm side for basking and low 80’s to mid 70’s for the cool end. Low humidity is key with this species. I don’t even bother with a water dish because with the heat of the tank the humidity shoots up too quickly. Each night they are fed it’s simple to just give a few sprays of water on the wall of the tank. They prefer to drink water drops and this lets the tank humidity stay low. 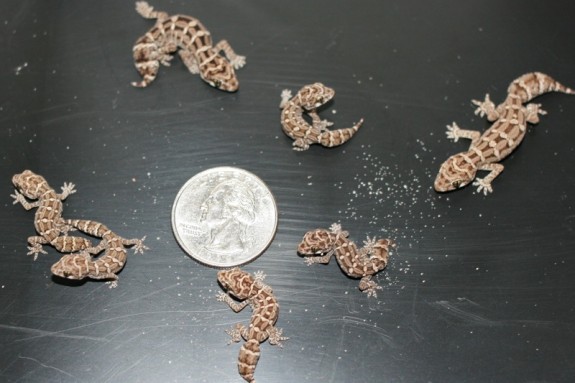 Viper geckos would have the chance of becoming very prolific if they did not lay so many nonviable eggs and had a lower mortality rate in the young. They can lay up to 12 , sometimes 14, sets of eggs a year. Incubation methods are debated but since they lay hard shell eggs I incubate them lifted off the wet incubation medium in a small dish at 82F. This seems to have increased my survival rate in hatchlings this year. Hopefully this temperature range will also give a breeder a good mix of male and female hatchlings. Overall they are a very simple gecko species to keep as a pet, interesting and fun to watch. Breeding is still a challenge but so far, to me, it has been a rewarding one.

Sarah Dickenson is a mother and wife living in Central Oregon. She has been keeping reptiles for over the last 15 years and owns LunarGecko.net. She is also the president and founder of Central Oregon Herpetology and supporting member of GGA, IRCF and USARK.