Crested Geckos have a very wide range of color, pattern and traits with a seemingly endless possibility of combinations that opens the doorway for serious breeders to an excitingly beautiful world of Morphs. Crested geckos are relatively new when it comes to the animal world, only being rediscovered no more than 20 years ago after being thought extinct. This has not allowed scientists the time needed to prove out any traits so when it comes to crested geckos, traits are not genetically connected to the morphs. Once they are it is possible many things will change but until then we try to maintain a logical approach and come to a universal standard that can be accepted by a majority of the gecko community. Dedicated breeders have a very good idea what they can produce and which traits seem to breed true.

Many people have all kinds of information on their sites and not all of it can be trusted. That and the fact that crested gecko morph guides are subject to a large amount of opinion, make it difficult to grasp a firm understanding of what is what. Gecko forums like Pangea reptile, Repashy or ACreptiles have some great information. Pangea has an excellent morph guide to help understand morphs, which also includes a reference guide to help people communicate with each other when discussing morphs. This article includes those references which cover the following:

Traits are any phenotypic character that can be inherited and reproduced. Pattern, color, and structure are all traits. Morphs are crested geckos that are specifically developed to portray a good example of the desired trait or group of traits. Independent traits are traits that can be present in multiple
morphs.

There are some morphs that are very straightforward and can be identified easily. Others are not so easy. There is also a difference between a morph and a project. A project is someone’s personal breeding colony with a morph goal in mind. Any combination of traits that can be reproduced consistently can be a morph. It’s hard to exactly pinpoint when a project becomes a morph. It seems to be a combination of a highly developed trait or group of traits and a large degree of popularity, either from the breeder or the crested gecko’s appearance.

There is a core group of morphs that pretty much covers most of what we see today. The core group, which was established by the people who were involved in their discovery, consists of these 5 basic morphs:

In the wild you would only see patternless, tigers, and maybe a bi-color but it wasn’t until after captive breeding came along that we began to see the beginning of the wide variety we now have today.

Patternless: The name says it all. This is a crested gecko with zero pattern in any zone area of the body. They are also one solid color. 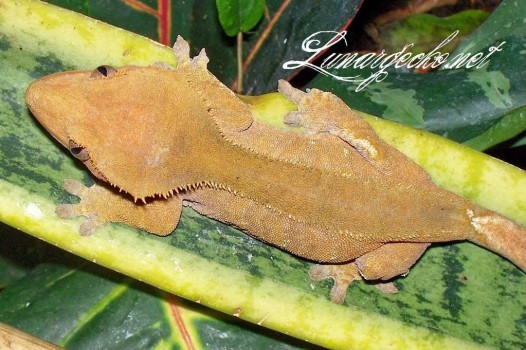 Tiger: Tigers go one step further and they develop pattern which resembles thin stripes like a tiger. The pattern starts on one side of the body (zone C or D) and wraps over the dorsal (zone B) onto the other side of the gecko (zone C or D). 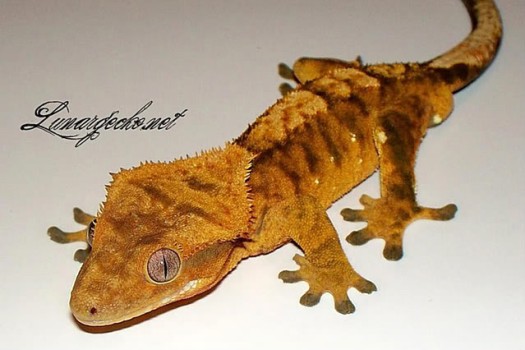 Bi-color: Bi-colors are also self explanatory. They have zero pattern and they are two different colors. The head and dorsal (zone A and B) are one color and the sides and limbs (zone C, D and E) are another. 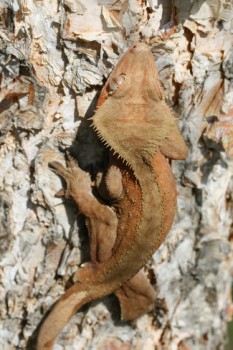 Flame: Flame was the first gecko with something new. It had a light colored head and dorsal area (zone A and B) confined by the lateral lines along the dorsal that was streaked with another dark color. The pattern resembled a fire or flame which is how the name came about. The sides and limbs
(zone C, D, and E) were patternless or had small amounts of side and limb pattern usually contained within the lower sides (zone D) or limbs (zone E).

There are a lot of side projects that were inspired by Flame. Breeders worked hard to manipulate color and the first celebrity morphs were born. These included Halloweens, creamcicles and chocolate blondes. These types of morphs always spin off from one of the 5 basic morphs, usually involving color. 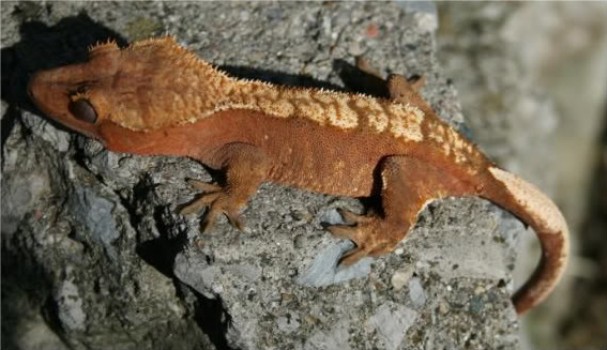 Harlequins: Harlequins were once considered a type of Flame. At the time they were rare, and appeared to be a Flame with extensive patterning on the sides and limbs (zone C, D, and E). As Harlequins increased in numbers and popularity it branched off into its own morph. 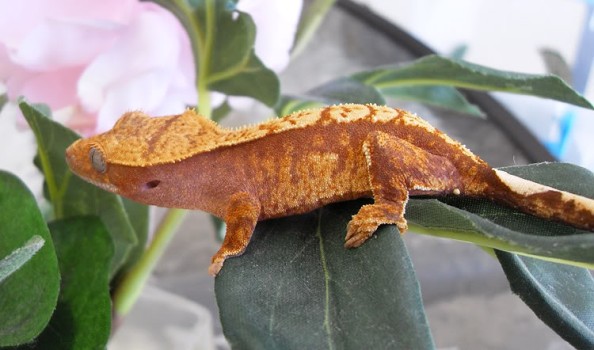 There are also some additional morphs that were in the process of development, just a project or not even thought of yet when the core groups of morphs were forming. These included the following: Pinstripe, Dalmatian, Brindle, and Extreme Harlequin.

Pinstripe: The Pinstripe is a morph developed by Allen Repashy and it started with the pinstriping trait.
Pinstriping is a set of raised scales that runs down each side of the dorsal. They are actually a structural trait which is preferably highlighted with white or cream coloration. Pinstriping is an independent trait and can be found on Flame or Harlequin morphs. There are many degrees to the pinstriping trait including dashed, low percentage, and high percentage “pinner”. There are also many side projects with color and pattern involving the pinstripe. Phantom Pinstripe, Quad-striped, Extreme Harlequin Pinstripe are all great examples of what can be done with the trait. The Pinstripe morph is a good example of how a highly developed trait, like the full pinstripe, and popularity, in this case both appearance and breeder status can come together and create a new morph when it comes to crested geckos.

Dalmatian: Dalmatian spots, like the pinstripe, are an independent trait that can be found on any morph.
Any gecko with 25 or more spots is a Dalmatian and with more than 100 spots it becomes a super Dalmatian.
There are couple of other spot variables like colored spots, oil spots, phantom spots, big huge spots and spot clusters. 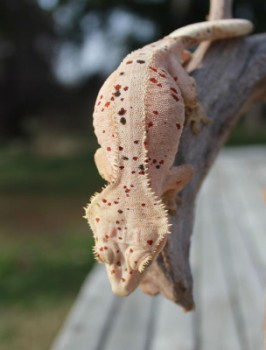 Brindle: Brindle is sometimes thought of as a super tiger because of the similar striping appearance. After a few years of breeding, this morph has established itself within the list of known morphs. Breeders have taken it to the next level and created some very nice examples that stand apart. 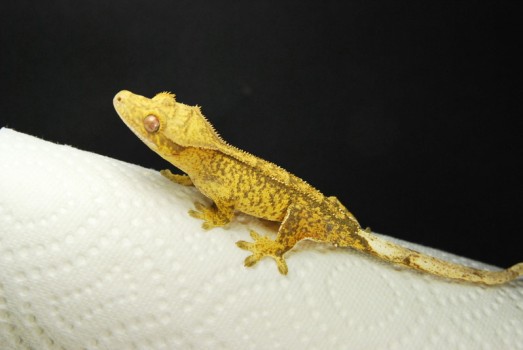 Extreme Harlequin: This is, as the name implies,  a Harlequin with pattern that takes it to the extreme level. The Pattern should fill all zone areas and the pattern in the upper lateral area (zone C) should be either connecting with sections of the dorsal (zone B) or covering at least 3/4 of the upper side as well as the lower lateral (zone D) and limbs (zone E). This is a very busy and beautiful morph.

There are many side projects with this one including tri-colors, Halloween, blondes, solid backs, and many more. 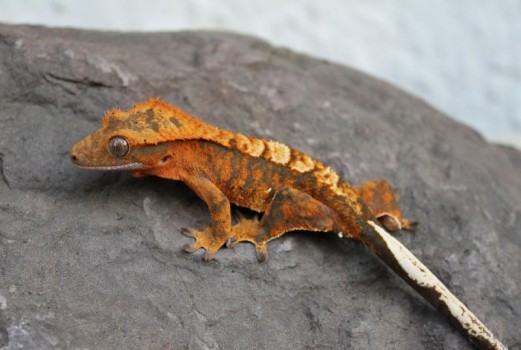 Even with all we know about crested geckos, when it comes to breeding, there are still moments when an oddball pops up and takes the breeder by surprise. This can even occur in cases when lineage is well known and documented. The first possible pied crested gecko has just barely came to light and is still in the process of validation. This goes to show how much we still have to learn and how exciting the future is when it comes to these awesome little creatures.

Steven Schroeder grew up in the desert in Lancaster CA where herping in the fields turned him into a reptile lover. He now lives in Lake Elsinore CA. He has had many different reptiles over the years including bearded dragons, iguana, python, turtles and many more wild and captive bred. Crested geckos resparked his love for geckos and he has been working with them ever since 2009. He also plans on branching out within and outside the species and eventually will take it to the next level and start a side business.