I first saw the banded gecko in a book my parents got for me as a gift from Phoenix, AZ. The book was called 50 common Reptiles & Amphibians of the Southwest and it showed the desert banded gecko. Fast forward another 3 years and we went to Arizona for vacation, where I got to see the desert banded gecko at the Phoenix Zoo. I fell in love after that moment, from that moment on till this day I’ve researched about this species hoping to buy some in the future. This year might be the year that I will get some. So, now I need to build the enclosure for these desert gems.

Banded geckos are a small species of terrestrial gecko from the genus Coleonyx, which are found the Southwestern United States, Northern Mexico and Central America. On average desert banded geckos attain a length of 4-6 inches and are sandy in color with dark crossbands and patches. The skin is made of very small round scales giving the skin a silk like texture, this species also poses moveable eyelids just like the leopard gecko. 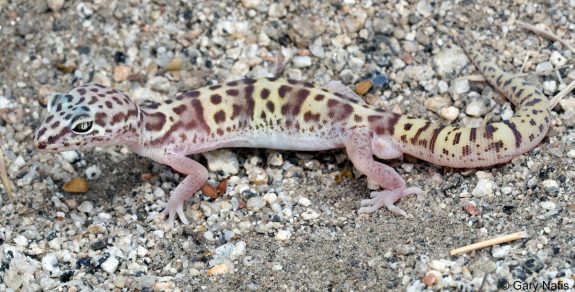 Banded geckos in the wild consume a large variety of smaller Arthropods including but not limited to; crickets, beetles, moths, spiders, ants, and even baby scorpions. Banded geckos are helpful in the area of pest insect control and will readily consume baby scorpions (this is not recommended in captivity as it could harm or kill your gecko). Also these geckos when threatened will raise their tails to look just like a scorpion. In a captive setting banded geckos will eat small crickets, mealworms, calci-worms, and wax worms as the occasional treat. Fruit flies could be fed as well, but have been a hit with some geckos and a miss with others. All feeders should be dusted in a calcium or multivitamin powder for necessary health and provision of trace elements.

The care for desert banded geckos is very similar to the leopard gecko. Like leos, banded geckos are a nocturnal species. The ground temps should not get above 90 degrees with the air temps not getting above 85, and there should be many hides to make them feel secure. The enclosure should contain many warm hides and a moist hide with 70+ percent humidity for shedding. If handled too roughly they can drop their tails and sometimes squeak. A trio of one male with two females can live in a ten gallon tank. It is advised to never house two males together as they will fight and could injure or kill each other. Females lay two or more clutches of soft eggs with each clutch usually containing 2 eggs. Eggs hatch typically in six weeks and the sex of the eggs is genetic not temperature dependent. Desert banded geckos live around 5-8 years in captivity. the desert banded gecko is not very common in the trade as collecting them in many states is not legal. Josh’s Frogs has some desert and Central American banded geckos and should have them for sale in the late summer or early fall of 2018.

The goal of my setup is to replicate the natural habitat of the desert banded gecko (Coleonyx variegatus), I will be trying to replicate a picture I saw on California Herps. The picture shows an abandoned wood pile with lots of grass and a shrub. I plan on making the tank as natural as possible with loose substrate. YES, I just said LOOSE substrate with a gecko, I will have 2 substate layers: a moist layer for the CUC (clean up crew) and the dryer desert layer that the gecko will walk on. There will be a Sedum sp. and dry grass, along with a cholla skeleton, dead brush and some rocks. I will get a clean up crew mentioned earlier minus the firebrats if I can’t find a source to those.

Selecting the plants was one of the harder aspects of this build, besides the climate and hardscape. There were many different routes I could have chosen to produce a desert theme with cactus, agave, dead shrubs; a more forest-like environment with smaller “shrubs”, dried mosses and live grass or the combination of the two. I chose to build the tank as a dry shrubland with an old wood pile. The plants I will be using are dead/dying grass patches, Sedum spurium ‘Red Carpet’, and some moss. This flora needs to also be complemented by the hardscape chosen.

The substrate will have two different layers as stated earlier. The bottom layer will be the moist layer to provide a humid retreat for the CUC, then a screen layer with the dry layer on top of that; this layer will be what the gecko walks on. The moist layer will consist of wood chips, Joe’s Organic Canadian Peat Moss, crushed up eggshells, Fluker’s Dry Cricket Food and leaf mulch. I chose the cactus and palm soil as it drains fast which is needed for a base-layer, I chose not to have a drainage layer due to a heat mat and ceramic heat emitter being used.

The mix consists of:

The dry substrate layer has fewer ingredients but it does form a nice crust on top when it dries. I used play sand, bentonite clay and Joe’s Organic Canadian Peat. The mix is approximately:

The hardscape is super simple, yet effective for the goal of the tank. I am going with some small sandstone rocks and a cholla log for a hide. I will also have some old pieces of wood boards to create the “wood pile” look I’m going for. 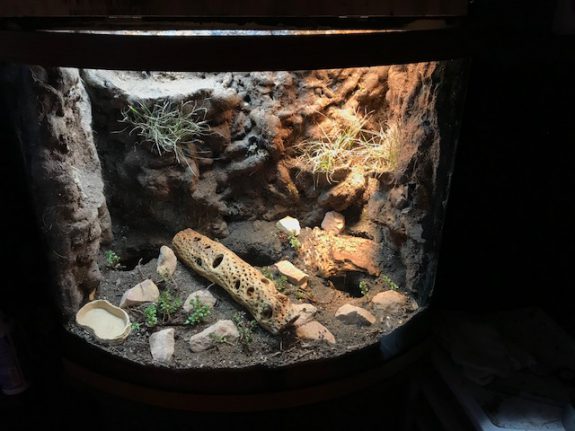 For the climate I looked up the average high and low temps for Western Texas and how many days get rain. I came up with this schedule that will hopefully replicate the season with warm up and cool downs.

The days with rain are the days that will be a heavy misting and every day will get a light 5 second mist in the morning and at night.

I am continuing to work on my banded gecko enclosure. The next article will go over the tank build from taking down the old tank to the soon-to-be desert for the banded geckos

Calvin Darling is a Junior attending Moorhead High School with a passion for anything nature or animal related. Calvin has owned herps from a young age keeping American Toads (Anaxyrus americanus) or Boreal Chorus Frogs (Pseudacris maculata). Right now he owns two reptiles a rescued Leopard Gecko (Eublepharis macularius) named “Echo” and a male Green Anole (Anolis carolinensis) named “Boulder”. When he’s not reading about or caring for his reptiles he likes to go on hikes or fish down at the Red River. Calvin plans to attend the University of Wisconsin- Stevens Point with a major in Biology emphasizing in Zoo and Aquaria. In the future he hopes to have a reptile room to breed Banded geckos (Coleonyx sp.), Hognose snakes (Heterodon sp.) and Garter snakes (Thamnophis sp.) along with the breeding he wants to have many bioactive display tanks for his animals.