To celebrate US Independence Day, Gecko Time presents some information about  geckos which are native to mainland United States.   This does not include geckos which have been introduced from other locales.  There are three genera native to the United States, two of which contain a single species and one which includes at least four species. Phyllodactylus xanti and the four Coleonyx species (brevis, switaki, reticulatus, variegatus and its subspecies) are native to California and southwestern United States; Sphaerodactylus notatus (“reef gecko”) is native to the Florida Keys.


Coleonyx are probably the most widely kept of all native U.S. Geckos, both in this country and abroad.  The most popular are Coleonyx variegatus and its subspecies (C.v. abboti, bogerti, variegatus and the less popular C.v. utahensis and san lucan) and Coleonyx brevis.  Other species found in the United States are C.v. switaki, and reticulatus.  Various Coleonyx species are distributed throughout the western and southwestern states including (but not necessarily limited to) California, Utah, Arizona and Texas.  These geckos are small and smooth-skinned, reaching a maximum length of about 5 inches.  They are born with brown and yellow bands which develop into adult coloring, ranging from bands to splotches to spots.  They are eublepharids with movable eyelids, nocturnal and terrestrial.  Although they inhabit areas with very dry climates, it is possible that they spend a fair amount of time in caves and crevices where there may be a microclimate with higher humidity.  The Coleonyx I have kept have thrived when exposed to higher humidity.  My primary experience has been with Coleonyx variegatus bogerti, also known as the “Tucson Banded Gecko”.  Care of Coleonyx is very similar to that of leopard geckos, though they are quite a bit smaller.  Opinions vary about whether to keep them on a particulate substrate or not.  After much thought and research, I decided to keep them on a ceramic tile substrate with some areas of eco-earth provided in containers.  The geckos often spent much of their time under pieces of slate dug into the eco-earth. 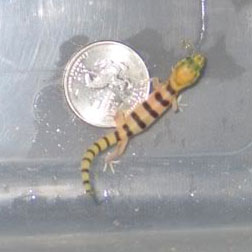 I have found the Coleonyx I’ve kept to be extremely alert and entertaining. They eat small crickets and occasionally mealworms with gusto.  They are very aware of any change in their environment.  If another gecko is introduced to the enclosure, they will approach warily with tail waving slowly, may occasionally nip at the newcomer and then will usually settle down and co-exist peacefully.  Although I have not been able to reliably handle my coleonyx, a friend to whom I sold a juvenile reports that it regularly climbs on his hand, allows him to “play” with it and will eat from his hand. 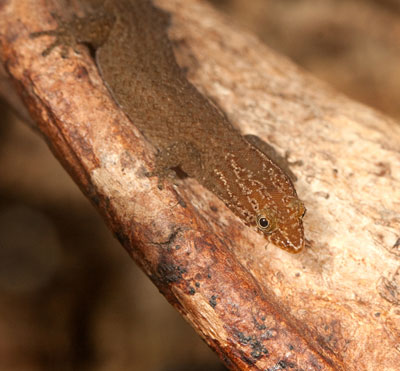 This species, also known as the “reef gecko”  is the only United States gecko not found in the western part of the country.  According to www.herpedia.com it is the smallest North American gecko, reaching a size of about 2 ½ inches.  A terrestrial gecko without eyelids, it is brown with dark speckling and an orange tail on the underside.

Maureen Winter writes about her experience keeping this gecko

Sphaerodactylus notatus is a delightful little gecko to keep. They are one of the many Sphaerodactylus which can be seen exploring the terrarium daily. This is one gecko which quickly settles in. Once settled you will find it to be quite friendly, it may even crawl onto your hand as you are misting, but general holding is not recommended for this small animal.

One of the first things I noticed about this cute little gecko when bringing it home was that it has the ability to move around both of its eyes at various different angles separately at the same time. Talk about talent! 😉

A great thing about Sphaerodactylus notatus is that they can be kept in a minimum enclosure size of 2 gallons. They can be kept in bigger enclosures of course, but it is not really needed and may even stress them out due to their small size.

In the wild Sphaerodactylus notatus is generally found in the leaf litter, under stones and dead wood. Due to this, their lighting in captivity needs not to be dramatic: a single fluorescent T5 tube with a rating of 4,000K or 6500K will do. If your enclosure is a little larger than 2 gallons, you can even mix the two types of bulbs. It is not required to provide Sphaerodactylus with spot or UVB lamps; the latter may even kill the gecko when used for prolonged periods. Lighting is maintained for 12 hours daily, with reduced illumination in the winter months, so the females my regain their strength for the next breeding season.

In captivity Sphaerodactylus notatus should be kept at temperatures of 79-82F with around 70% humidity. 70% humidity is easily achieved by misting them once daily. Their substrate can either be plain sand or a sand, coconut fiber, peat moss mixture, with the latter being the preferred choice. It is also important to place pieces of flat cork or scattered leaves around the terrarium floors, so the geckos may hide if need be. The walls of the terrarium may be decorated with stone or cork.

The diet of Sphaerodactylus notatus in captivity consists of micro-food, such as Drosophila melanogaster, Springtails, newborn Firebrats, Micro Crickets and Tropical Woodlice. A small bowl of crushed up cuttlefish bone is an important fixture of the terrarium for breeding females. All feeder insects should be dusted with a high quality supplement. I strongly recommend SuperMin & Calcium Plus ICB by Rephasy or other equally high quality supplements. Misting their tank once daily will also provide them with their daily water supply.

Sphaerodactylus notatus should be kept in pairs only, as females of this species can be as equally aggressive as trying to house two males together. 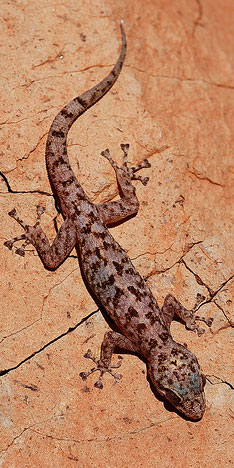 I was unable to locate anyone who keeps Phyllodactylus xanti, also known as the “leaf toed gecko”.  It would be lovely to hear from someone who keeps them if you’re out there.  These western geckos are, according to www.herpedia.com, 4-5 inches long, without eyelids and nocturnal.  Their coloring is “translucent pink to gray, occasionally with dark brown blotches.  The back scales are small and granular with lengthwise rows of wart-like tubercles (quoted from herpedia.com)”.  They get their common name from the leaf shaped pads on the ends of their toes.  This species is found in southwestern California and the islands in  the Gulf of California.

California Herp has some great photos of this species and their habitat.

If you live near or travel to the Florida Keys or the Southwest, enjoy searching for these “native Americans”!

Born and raised on Long Island, New York, Maureen Winter has been keeping reptiles and amphibians on and off since the age of 7. Her first reptile was a Red Eared Slider. Later on she kept various amphibians ranging from Hyla cinerea to Litoria caerulea and was quickly hooked. Eventually Maureen moved to Münster, Germany and longed to have her beloved amphibians once again. She began with Litoria caerulea and her hobby grew to keeping various species of dart frogs. After a year of owning dart frogs Maureen desired to have some geckos and soon her first geckos, Phelsuma klemmeri, were purchased. Shortly after, she began keeping many different geckos. She currently works with various Pheulsuma, Lygodactylus, Sphaerodactylus, and Lepidodactylus lugubris, alongside her many frogs.