As a small scale breeder, I count on the winter months to provide some much needed down-time from producing and caring for baby geckos.  Usually my last baby hatches some time in October (I breed leopard geckos, African fat tail geckos, gargoyle geckos and Coleonyx).  The first eggs tend to appear in February and the first hatches no sooner than April.  The winter for me is a time to sell the remainder of what I’ve produced during the previous breeding season, plan for the coming season and spend a little less time feeding and cleaning.  So imagine my surprise in October 2011, two weeks after hatching my last gecko of the season, when I discovered that my Coleonyx variegatus gecko had laid another clutch.

She had done well for me the previous season.  Produced by me in 2009 and sold to a friend, I got her back in 2011 and paired her with a young male with white instead of the more common yellow coloring.  She laid 4 clutches between mid-May and the end of June 2011 and produced 5 babies, all eventually developing the white coloration: 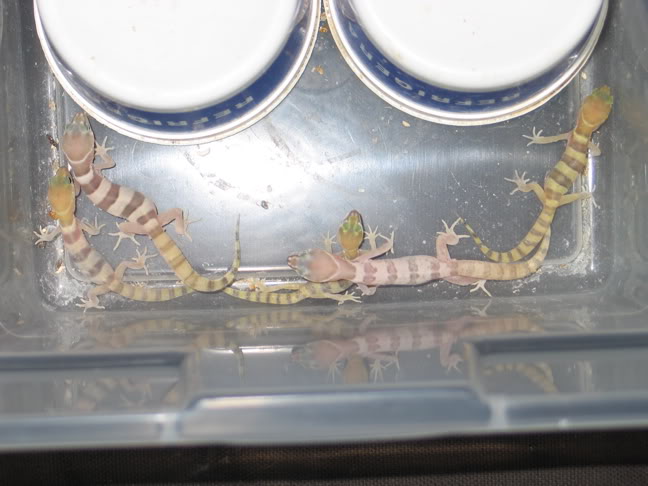 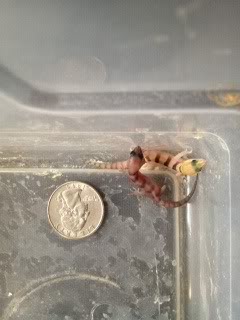 I had had experience with previous Coleonyx pairs laying clutch after infertile clutch into the fall after producing a reasonable number of viable offspring, but had never had one start up after a four-month hiatus.  I plugged in the incubator again and put the eggs in without much expectation.  The first two Coleonyx of my 2012 season were born on Christmas Day 2011.

By then there were 3 more clutches in the incubator.

This gecko must have been related to that bunny with the battery.  Through the winter, spring and summer, she continued to produce a pair of eggs approximately every two weeks, 2 or three clutches a month.  The eggs were easily visible in her belly even just after she’d laid. What to do?  I considered cooling her.  I decided not to, since a previous attempt to cool another pair of Coleonyx had resulted in the unexpected death of what had seemed to be a healthy gecko.  She was maintaining her weight well and was active and healthy so I let her continue.

The Trouble with Tribbles

My next dilemma was figuring out how to sell the offspring.  There don’t seem to be many Coleonyx breeders around and not many people appear to be keeping them.  They are small geckos, averaging about 3” and 10 grams in size as adults so they’re more of a  display gecko than a pet that can be handled.  Their care isn’t complicated, though, and very similar to that of a leopard gecko.

To add to the problem, most of the first 10 or so that hatched were male.  The jury seems to be out as to whether Coleonyx are temperature sexed or not.  I was incubating them at about 83-84F which pretty much guarantees me all female leopard geckos and my only other incubator was set at 74F for the gargoyles so either the Coleonyx temperature range runs lower than that of the leopard geckos, or it’s immaterial. Since male Coleonyx, like leopard geckos, can’t be housed together, a predominantly male population would be hard to move.  Fortunately, the females “caught up” and my output began to run approximately 50-50.

The tried and true methods for selling geckos applied to the Coleonyx as well: I brought them to shows where I vended, placed a pair in a local reptile pet store “on approval” (I don’t get paid until they sell, but I also don’t have to feed and house them).  Mostly I talked about them a lot.  By the end of the summer I had sold nearly all of them.

Meanwhile, the gecko in question was still pumping them out.  Every two weeks or so, I’d root around in her lay box and pull out two dented eggs.  I put them in the incubator anyway and most of them plumped up right away and started growing.  By my count, she laid 22 clutches between October 2011 and October 2012, though I may have forgotten to record a few.  She laid 3 clutches in March and April, one in May, July, August and October 2012 and two clutches per month the other months of the year.

Like every good breeder, I have plans for the future. Although the original male and female are from different gene pools (the male is a Coleonyx variegatus variegatus and the female is a Coleonyx variegatus bogerti), the pairs I’m selling to prospective breeders are full siblings and their offspring should definitely be outcrossed.  Recently my Gecko Time co-editor and I acquired two pairs of wild caught Coleonyx, one from the Tucson Arizona locale and one from Borrego California.  We anticipate that next season we’ll be able to offer Coleonyx from 3 separate bloodlines for better genetic diversity (anyone interested?).
Fortunately for me, not every egg hatched.  My last two Coleonyx, numbers 28 and 29, appeared the week after Thanksgiving, just about exactly 11 months after the first two of the season! Currently I have 8 offspring available for sale. The female continues to do well and I have finally turned off my incubator after 2 years of nearly continuous production.

Although my amel African fat tail appears to be gravid . . . 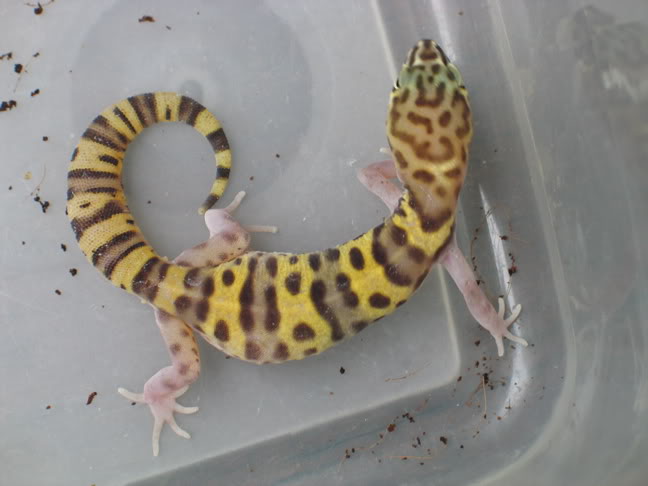 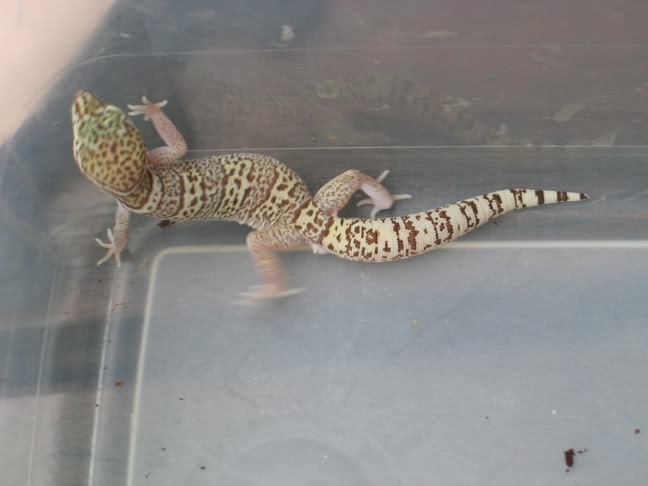 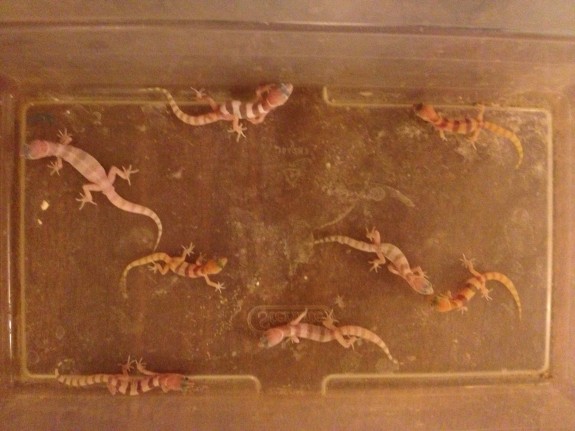