There is a plethora of conflicting information available to the exotic pet enthusiast regarding the propagation of feeder insects that only just scratches the surface of  how to effectively produce them in quantities sufficient to support one’s animals. In this article I will cover the topic a bit more in depth.

I will not go into great detail with regards to temperature and humidity, or housing methods as this method is not particularly dependent on these variables.  So long as your roach colony is producing this method will help you maximize production and reduce age related die-offs.

It is assumed that proper temperature, food, and hydration are always provided.

Specifically this article will cover the most popular feeder insect: Blaptica dubia (Serville, 1839). The basic technique is applicable to many large feeder roaches so the methods can be used with them as well with minor adjustment. 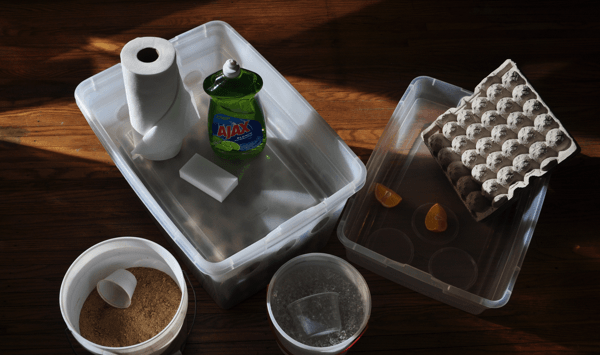 Maintain a sex ratio of 1:1.  This insures that all females are impregnated quickly and efficiently and increases genetic diversity within your colony.  While most care guides suggest a ratio in the range of 1:3 to 1:5 it has been the experience of this author that an even ratio of males to females allows for the highest impregnation rate.

Rotate out of production roaches that are past their prime.  Numbers of nymphs that are produced at each birthing follow a bell curve: the first production of nymphs is smaller in number and increases to a point of maximum potential, then falls off rapidly.  Keeping roaches that are past their prime costs you more in terms of food and increases the number of total feeders lost due to eventual die off of adult roaches when they expire from old age.

Separate adults from sub-adults, reserve three times as many from the first birthing as you require female reproducing adults, and do this twice with a thirty day span between reserved collections of nymphs.

Allow the two sets of nymphs to mature; males will mature first in both sets, females following about a month later.

The mature males of your first collection may be fed off in their entirety. You will not need them as breeders, reserve the remaining females.

When the first batch of females matures, pair them with the second lots of newly maturing males.  The remaining slower to mature females of your second lot can be fed off.

The original adults used to start this new colony can be fed off at this point as their production is now at the stage where it is just starting to fall from its peak and the cost to maintain them is higher than their value as feeders. 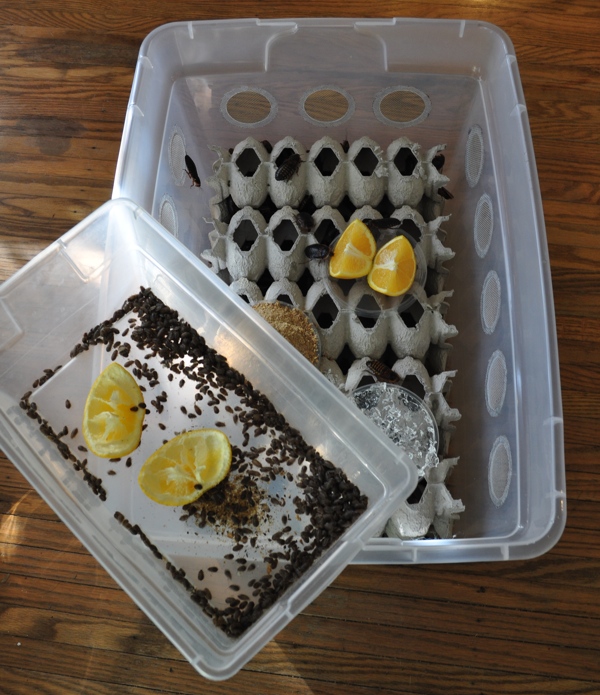 It is best to collect nymphs on a weekly basis to limit the disturbance of breeding adults and promote proper sanitation.  In our experience we find that removing adults by hand reduces injury to developing eggs within the females of the group.  This technique alone increases production by nearly eliminating egg loss from violent slapping of egg flats to remove the roaches.

Once the adults are removed, the nymphs can be maintained on the old egg flats or removed with fairly little effort using the egg flat tapping method over a bin.  For the first two birthing’s from which you will be reserving nymphs keep the two batches of nymphs in separate bins and date each for future reference.

Clean your bins at each collection: the elimination of waste reudces odor and prevents flies and other pests from attacking your colony.  Standard dishwashing detergent diluted in a ratio of one part detergent to nine parts water can be used in a reusable spray bottle. This keeps maintenance costs low and is highly effective.  Rinse out any stuck waste, pre-scrub the bin with a washcloth or green scratch pad, spray the bin exterior first then the interior and let it stand a few minutes. The final scrub down is best accomplished with a magic eraser type sponge. Rinse with hot water then dry the container.

Replace soiled or damp egg flats. We replace ours weekly and recommend nothing less than biweekly replacement for sanitation reasons.

Aside from the two bins you reserve and your main breeding bin we suggest maintaining a feeder bin. This allows you to keep an accurate rotation going and prevents you from inadvertently pulling future breeders and killing your production.

You will notice that the roaches in your sub-adult feeder bin consume a great deal more food than your those in the breeder bins; this is normal.  Their waste production is also higher, so sanitation is a must.  A secondary use of the roaches in this bin is to replace any losses in your breeder bins. We tend to see less than a one percent loss in our breeding bins and our feeder bins easily replenish this loss with fresh adults so long as retired breeders are not added to it.

Once a large enough colony has been established it is important to establish a minimum and maximum population density  for each enclosure in order to keep production maximized and allow a predictable food usage in each colony to be maintained.  Monitoring and recording the size of each colony as well as the production of each, you will notice among other things the point where production is best and where it begins to fall off vs. the number of adults in your colony.  Maintaining your colony at this peak point is the most cost effective way of rearing your own feeders. The exact maximum number of adults in a given enclosure of course depends on the size of that enclosure, the method of providing surfaces on which to climb, and the delivery of heat throughout the colony.  As the population density approaches the maximum acceptable limit increases in production begin to slow vs. the number of females maintained. This is sometimes due to limited access to food and hydration because of the high density of roaches competing for the same resources.  If you believe your population density is low try to offer multiple food and hydration stations to correct the issue.

Feed off roaches that are smaller than average as adults. This practice will modify your colonies’ genetic mixture quickly and efficiently toward the production of uniformly sized adults that produce more efficiently.  It should be noted that young female adults that have yet to be impregnated seem smaller than pregnant females.

Last but not least, select the fastest maturing roaches for future breeding.  Noting the date each collection of nymphs took place and observing when the nymphs mature provides  the owner with an accurate method of determining which roaches are maturing the fastest.  Males tend to mature faster than females yet there  tends to be a range of development speed for both sexes. Selecting the faster maturing roaches can accelerate your production.

The main goal of most hobbyists is to become self-reliant or to diversify the number of feeder insects they can offer their exotic pets.  The methods I have described above typically take under an hour a week to accomplish per colony and reward the owner with a substantial increase in production.

That’s about the gist of it, good luck.

Maurice is owner operator of Maurice’s Exotic Pets, a small family run business focused on providing exotic pet owners the very best feeder insects possible. Maurice specializes in the production of tropical feeder insects and diets for them, as well as a variety of standard feeders used in the exotic pet community. His interests include working with geckos, monitors, and the common green anoles that fueled his interest in reptiles as a child. Prior to starting Maurice’s Exotic Pets, Maurice was a soldier in the United States Army and is a Desert Storm veteran. His army career was cut short by a training injury. Maurice and his wife Sharon live in Louisville Kentucky with their four children, the eldest of whom is studying at Morehead University with aspirations to become an exotic animal veterinarian.