Failure to eat, or a reduction in eating habits in a gecko is not really a problem in and of itself, but a symptom of either an illness or a natural situation. Since most keepers consider regular feeding to be a sign of good health, it is disconcerting when a gecko doesn’t eat. Most of the time, a gecko does not eat well due to illness, stress or life cycle events.

A gecko which is impacted, has an infection, a high parasite load, or who has MBD (Metabolic Bone Disease) is likely to stop eating. Some of these illnesses can be observed by the keeper: an infection may show up as a puss-filled lesion, a reddened or swollen area, or filmy eyes. A gecko with a respiratory infection may have plugged nostrils, be laboring to breathe or may make unnatural “croaking” sounds. Signs of MBD include rubbery legs and jaw and inability to bear weight. Geckos who are impacted often have a swollen belly and may not move their bowels for a long time. Although MBD and impaction may be “cured” by increasing calcium and vitamin D3 intake, and a warm soak respectively, geckos who are ill need to be seen by a vet who may prescribe antibiotics or some other treatment. Some illnesses are unavoidable even by the most experienced keeper.  However,  good husbandry practices will minimize the chances of illness in all gecko species.

Geckos often react to stress by decreasing their food intake. You could say that all situations covered in this article ultimately lead to stress and result in decreased eating; this section will cover the stressful conditions not due to health or life cycle issues. Geckos become stressed by a variety of factors including being shipped, other transfers to a new environment, and bullying by other geckos. Improper temperatures, especially temperatures which are too low, also stress a gecko and make it difficult to digest food. In the case of a transfer to a new environment, usually when a gecko has a new owner, the gecko will resume eating once it becomes comfortable in its space. Some geckos have been known to hold out for weeks until they become comfortable in their new homes. In these cases, there is nothing to do but to continue to offer food regularly and to wait until the gecko is ready to eat. It also makes sense to consider the possibility that there is another cause as well, such as life cycle or illness that is occurring at the same time and to treat accordingly. 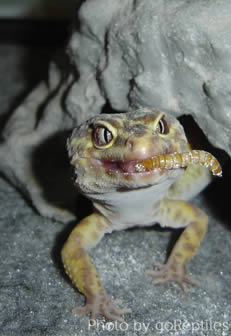 Bullying among geckos may be overt or covert. In some cases, the dominant gecko in a group can be observed attacking another gecko at random, or whenever the other gecko attempts to eat. Bullied geckos may have bite or scratch marks. A more subtle type of bullying occurs when the dominant gecko continually crowds the submissive one out of the spaces it chooses. In leopard geckos, this can be seen when the dominant gecko follows the submissive one from hide to hide and sits on it wherever it goes. A novice keeper may conclude that the geckos are “cuddling” when in reality the opposite is occurring. Geckos who are being bullied must be separated immediately. It may take the bullied gecko more time to to recover from the stress and begin eating, even after it has been separated.

The most common cause of decreased eating is the normal variation in feeding due to the gecko’s life cycle and seasonal factors:

Hatchlings do not need to eat during the first 3-7 days of their lives because they are still receiving nourishment from their pre-natal yolk sac. When they do begin to eat, it is not unusual for many hatchlings to start very slowly, only eating 1 or 2 prey items a day. Geckos that feed on fruit nectar diets, such as crested geckos, may not appear to be eating at all, since it’s impossible to tell whether or not they have touched their food. In addition to this normal slow start in feeding, some hatchlings take an even longer time to get the hang of eating and gain weight more slowly than their peers. Some hatchlings have medical conditions, not obvious at hatching, that will ultimately make it impossible for them to grow and thrive. Hatchlings which can be handled can sometimes be encouraged to eat by hand feeding: when prey items are fed, the keeper can hold the hatchling gently in one hand and press the feeder against the gecko’s mouth. Some geckos benefit from the keeper crushing the feeder and rubbing it on the gecko’s lips to encourage a feeding response. Nectar-feeding geckos will sometimes lick the food from a Q-tip. As a last resort, geckos can be fed a pureed “slurry”, developed by Marcia McGuinness of Golden Gate Geckos (http://www.geckoforums.net/showthread.php?t=19356).

When young, juveniles often eat a tremendous amount and grow quickly. At a certain point, which likely varies among gecko species, rate of feeding decreases significantly as growth rate slows. This can sometimes occur suddenly and is perceived by the novice keeper as a “problem” due to the change in rate of feeding. As long as the gecko remains healthy and alert, this is probably a normal change. It is also an indication that it is time to change a daily feeding schedule to every other day or every 2 days.

Many geckos do not eat the day or days before they shed. (Other geckos have been known to pause in the middle of shedding to “chow down”). Observe the gecko carefully to determine whether it is in the early stages of shedding and wait until a day after it has shed before considering other reasons for decrease in feeding.

There are a variety of circumstances related to breeding that cause temporary decrease in feeding. Males often stop eating early in the breeding season as they become fixated on breeding. Females who are ovulating often stop eating. Even if geckos are not in the same enclosure, they may sense the presence of the opposite gender gecko and respond by ceasing to eat. Female geckos who are about to lay eggs often become too uncomfortable to eat in the day before they lay. In addition, female geckos who are relentlessly being pursued by a male may also stop eating, a condition more related to stress, which is addressed above. In most cases, there is nothing the keeper needs to do but wait until the conditions causing the change have ended.

Many geckos are sensitive to the change in seasons even though they are maintained in temperature controlled environments. These geckos may demonstrate a significantly decreased appetite in the fall and winter. Some “brumate” during the winter months and may not eat at all, choosing instead to sleep most of the time in a cooler part of their enclosure. For geckos which are brumating or “cooling”, temperatures may be dropped for at least a 6 week period. Food items may be withheld but water should be offered. Keepers should be aware of the possibility that geckos may decrease their appetite and observe them carefully to determine to what extent they will need to be fed during the winter.

In conclusion, proper husbandry, attention to possible medical problems and awareness of the natural life cycle of the gecko will most likely result in a thriving gecko and a less concerned keeper.