The long wait is over! There, in the incubator (or sometimes in the parent enclosure), is a gecko hatchling! All too often, the new breeder’s next thought is “now what?” Although the question should have been answered long before the first egg was laid, this article can serve as a general guide for how to care for gecko hatchlings and a preview for those considering becoming breeders. It is no substitute, however, for research into the care of any gecko species you wish to breed and for thorough planning for your new reptiles before they hatch. 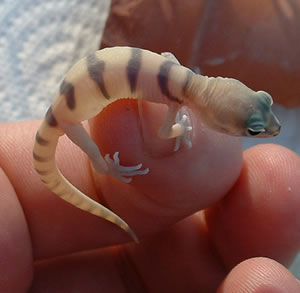 Geckos in the wild generally do not care for their young. They are born looking and acting physically like miniature adults, except for body markings which differ in juveniles for some species. They are able to move and respond to their environment as well as the adults. Hatchlings are at risk in the wild for becoming prey to an even greater extent than the adults, so they are more likely to hide and to make threatening sounds and movements if confronted in order to startle potential predators.

Most hatchlings will have absorbed their external yolk sac when they hatch. Their bellies, though, are still full of yolk which sustains them until they are ready to eat. Some hatchlings are born with the yolk sac or the umbilical cord still attached. These should be placed in a clean and quiet environment where they will either absorb or discard the yolk sac and umbilical cord.

Some hatchlings are born with deformities which may include eye and eyelid problems, umbilical hernias (where the umbilical cord insertion site is open and the entrails are protruding), misshapen or foreshortened limbs, kinked tails or other skeletal abnormalities. Some of these deformities are not compatible with life and the gecko will die shortly after birth. Some deformities will not affect a gecko’s daily life and some will require permanent special care. In these cases, the breeder will have to decide what to do about the gecko.

Hatchlings should be removed from the incubator after hatching. If the eggs have hatched in the parents’ enclosure, it is also a good idea to remove the hatchling so it will not become a meal for the adults. They should be placed in a small environment that meets the conditions of their adult counterparts: arboreal geckos should be placed in a small arboreal environment, tropical geckos in a tropical environment, and so on. It is important not to place hatchlings in an environment that is too big. Otherwise they will not be able to find their food when they are ready to eat. All newly hatched geckos will require some degree of greater humidity and misting to provide a source of drinking water and to keep them from drying out. Most new hatchlings should be misted several times a day.

Many hatchlings are tolerant of being kept with a clutchmate or with another hatchling of the same size. Some gecko species, or individual hatchlings do not do well with a “roommate”. It is important to keep only hatchlings of the same size together. Mismatched hatchlings have often resulted in tail loss, bullying and death of the smaller one. Breeders often prefer, if they have enough space, to keep hatchlings individually so they can better monitor each one’s development and growth.

Hatchlings do not eat until they have completed their first shed, usually after about 3 days. During this time they require an environment as described above with frequent misting. Although they don’t eat, they will continue to receive nutrition from the yolk that is still in their bellies when they hatch. Around the time of shedding, they will also produce the first stools which may be differently colored than those of older hatchlings.

After the hatchlings have shed and pooped, usually around Day 3, they may be ready to eat. They can be provided with shallow bowls of water, if they are species that generally drink from a water dish, small amounts of fruit nectar for the fruit-eating geckos, and small live feeders. It is important to provide feeders small enough for the hatchlings to eat safely. 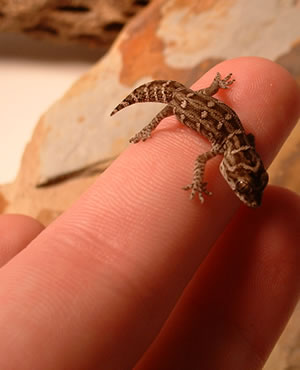 During the first week or two, many geckos will not eat much, possibly as little as only 1 or 2 prey items a day. Keep an eye on them to insure that they continue to be active and alert and try not to worry too much at this stage about whether or not they are eating enough. Most geckos increase their food intake significantly after the first 2 weeks, as can be seen from the size and number of their stools. Hatchlings that continue to eat little or not at all after 2 weeks and do not seem to be growing well may need to be hand fed until they catch on to the idea of eating.

Although hatchling care may not be quite as exciting as that first moment of seeing a new baby exit the egg, it is very rewarding and successful with a little knowledge, forethought and planning.