It’s been a long road and bumpy road for this lovely leopard gecko.  She was sitting on a vendor’s table at a reptile show last summer, July 2010, marked “RAPTOR F needs work $10”.  She looked so pitiful and unloved, but didn’t have the feared pencil tail.  So I asked about her history.  As another dealer, he really had nothing to lose by shooting straight because I understand the ins and outs of the business.  He said he had taken a gecko group in as a trade, didn’t have any desire to keep them as he was into snakes, and the rest of the “gex” had been sold.  She had been a difficult case, problem sheds since he’d had her (6 months) and didn’t eat on her own. He said she had to be hand fed, which he wasn’t very good with keeping up with.  So I forked over the cash and took the poor little thing in hopes that she would recover.

Help for the Gecko

When I got back to our table, Tim just shook his head, and said “I knew you’d go and get her.”  So if he didn’t think I should, why did he tell me about her??  Sheesh!  Upon an up close and personal inspection, I saw that she was in huge trouble and needed a vet, like last month.  I didn’t have any saline with me to wash her eyes that were densely covered with old shed.  So away we went to see Dr. Alfonso (Read our interview with Dr. Alfonso) I knew he had supplies there at the show.  When he saw her, he said “Oh my gosh, she might not make it but I’ll see what I can do.”  He cleaned the huge plugs of goop out of both her eyes, and found one eye had an ulceration.  He said she could be permanently blind, but recommended an antibiotic eye ointment to kill the infection.  All this activity scared the poop out of her so he ran a fecal float test.  I saw the results myself and, what a fright, she had a heavy hookworm load.  He told me  again that she might not pull through.  The Panacur antibiotic cannot be dispensed at the show, so I got some from his office, as well as some HillsA/D pet food to make the gecko soup/slurry I had read about on www.GeckoForums.net. 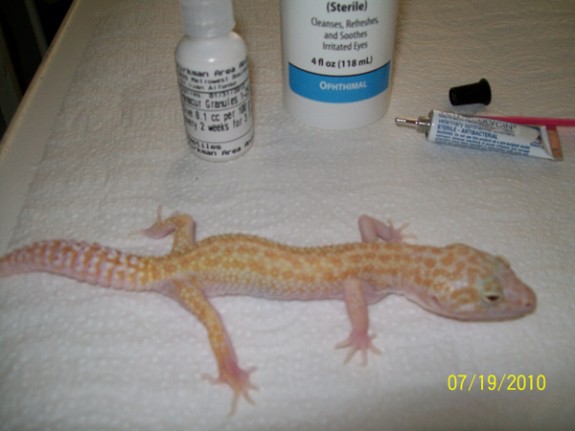 Back at home, and in a nice new tub, she just lay there.  I knew she might die.  A couple of  hours later when I checked on her, she was up on all fours, looking at where she heard noise from.  It was time for the eye routine, squirt and clean with saline, apply ointment, for both eyes.  She let me do this without protest, as she didn’t have the strength to fight.  I spoke softly to her and she pooped on me.  After that ordeal I placed her back in her new home and gathered up the ingredients for the slurry mixture.  Hopefully she would take to the slurry, since she wouldn’t eat a worm, and get some nutrition in her poor little body.  I felt it necessary to hold off on the Panacur until she began eating something, so the parasite treatment wouldn’t further weaken her.  Much to my happiness, she accepted the slurry, licking it from her food dotted lizard lips greedily.  After 5 days of this, the appropriate amount of Panacur was mixed in with a little of her slurry and she took it like a trooper.  It took two weeks of slurry in addition to ongoing eye treatments for her to take a worm from the tongs.  She was quite pleased with herself.

We attended the Daytona expo the following month and saw Dr. Alfonso and his wife, Divy there.  They inquired, with caution, as to how little Apple Annie was doing.  The look on their faces was priceless, amazed at the turnaround I described to them.  She had been eating a large freshly shed superworm every day and gained 12 grams, in addition to ongoing eye treatments and had completed the instructed Panacur dosages.  She was beginning to see shadows in one eye!  He recommended some eye drops and said it would take some time, as all had been done that could be done.  A month later I took her to see them and they were shocked at how different she looked.  But for the one eye, she looked like a happy, healthy leopard gecko with a fat tail.  He again reminded me that it would take some time if ever, for the formerly ulcerated eye to be normal.  He also said if she hadn’t been treated for the parasites, she would have been dead.  They were rapidly overtaking her already depleted system and literally sucking her life away by consuming her blood.

Now, eight months later, she’s a porker.  You would never know by looking at her that, at almost a year old she weighed only 22 grams.  Now she’s a whopping 64 grams, fat and happy!  She sees fine in her right eye and while the left is still funky looking but she sees shadow on that side.  Who knows, maybe there will eventually be 100% vision for her, but if not, it’s okay, all has been done that can be done.  She’s quite the fighter to have bounced back, and is indeed a sweetheart.  The name “Apple Annie” was chosen because she had huge shed plugs in her eyes, “apples”.  I love her  🙂 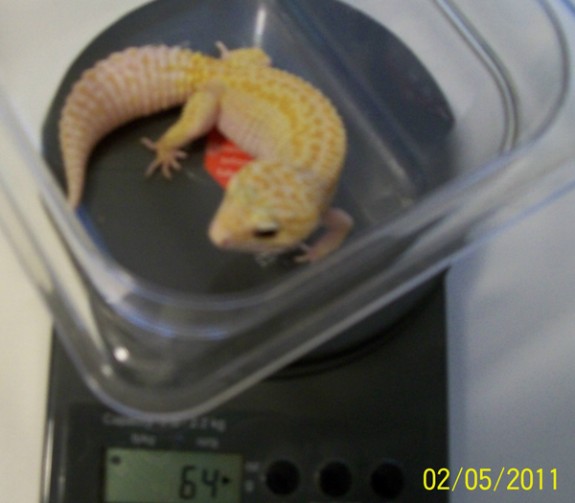 This happy ending would not have been possible without the advice of a qualified herp vet.  I will be forever grateful for Dr. Ivan Alfonso, DVM, in assisting me with Annie, and the friendship developed from this situation.

Laney has a background in geriatric nursing which fed into her passion for lizard rehabilitation. She and her partner own ByTheShore Reptiles and have been breeding many species of lizards and snakes for over 10 years. They are active members of the Jacksonville Herptelogical Society. She also enjoys growing orchids, making jewelry, baking and candy making.