Editors’ note:  This article was written jointly by Rebecca Hassler and Marco Struck

What is the pastel gene?

Geckos with the new “pastel” single gene were officially released by Ron Tremper in 2014.

The project started back in 2008 with a raptor baby which hatched out with a bright blue belly color through spontaneous genetic mutation . His pictures went across the globe and raised a huge interest in the global gecko community at that time. The bright blue belly-coloration faded after some weeks, but the animal and some of its relatives expressed a different pattern combined with a generally improved coloration of the animals. The project has been selectively bred and developed since 2009.

The name “pastel” fits well with the creamy coloration that many animals of this morph manifest. Unfortunately this term was already used in the gecko scene before – for describing leopard geckos of any morph or type that did not express bright colors and contrasts, but had more “pastel-like” coloration. Since the term “pastel” is already used to denote a paler coloration in existing leopard gecko morphs, we call the new gene the “bluebelly pastel” in this article to better differentiate it from the traditional “pastel”. 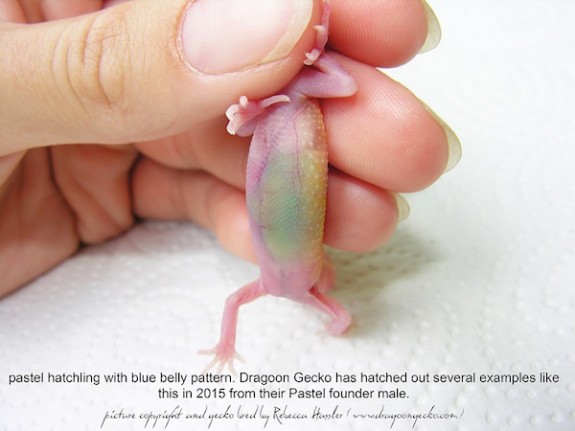 According to the originator’s findings, the bluebelly pastel is behaving as a single dominant gene.

It therefore can be bred into various other morphs. The theoretical breeding results should be:

Due to the fact that the bluebelly pastel is new to the market, not many people are working with them right now. The authors of this article simply want to share their current individual results with their gene pool of bluebelly pastels. We are aware that results may vary from breeding stock to breeding stock. We are also aware of the fact that at the current time, the possibility of a co-dominance or stong polygenic aspect of the gene cannot be completely excluded. What we know for sure: If you cross a true pastel to anything, you will definitely get pastel offspring in the first generation. Time will give the worldwide gecko community a more detailed picture of the genetics behind this new trait. 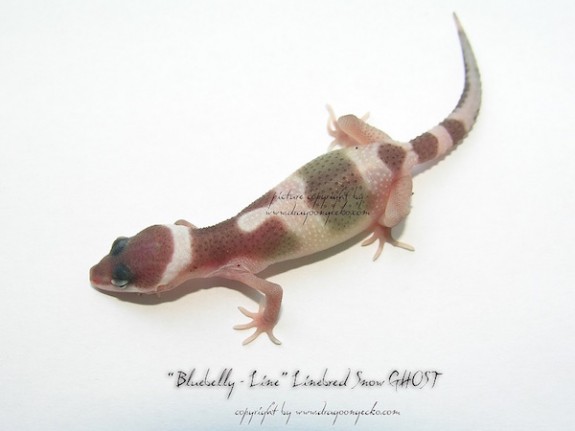 History of the bluebelly pastel gene at Dragoon Gecko

Rebecca Hassler: “My first pastel Bluebelly and founder male that I acquired for the dragoon gecko breeding program was born on May 8th 2013 in the US. This male is a Giant Pastel Raptor and was named Chronos due to his significant body pattern.

Visible markers of the pastel Bluebelly gene by Marco Struck:

Based on my professional discourse with Ron Tremper and my own findings of three generations of pastel bluebellys in 2015, I put together my personal, current identification key that I’d like to share with you here.

Checklist  for the “bluebelly gene” :

-at the same time the “opaque layer” often found in normal animals disappears from the skin => the animals appear “ultra-light” and “ultra-bright”.

-Lavender if manifested is extremely enhanced

– in most cases they do not show the typical head-pattern present in a normal geckos.

-increased framing of stripes and bands

As in W&Y or Enigma, all markers are not necessary found in one gecko. Also, when many genes interact it might complicate the determination of the offspring at first sight. As a consequence, it is imperative to know and find the breeders of these geckos who are able to verify that they are working with true genetic pastels from the bluebelly line.

As this gene is inherent, the founder breeders and the offspring of a breeder should be able to present the markers described above in a good amount and convincing quality .

The best solution for complex pastel combos surely is to let them grow until their colours fully develop, and only sell animals as “bluebelly pastels” that clearly express the markers.

Tips for purchasing a  Bluebelly Pastel:

♦  You get what you pay for! Just as in any morph, there will be high end and low end examples offered for sale. As a beginner, try to avoid examples that do not show the markers clearly.

♦  Do not select your animals based on the lowest price! It’s better to pay a little more for a confirmed pastel than to pay way too much for a normal gecko.

♦  Train your eyes by studying the pictures offered here in this article. This way you can make the right decision.

♦  If you are unsure ask for pictures of the parents. Keep in mind that not every baby from a pastel x normal pairing will indeed turn out to be a genetic pastel.

♦  Buy from an experienced and reliable breeder (type their names in Google and you’ll find their email, homepage or Facebook address). Buying from breeders with a good reputation  will significantly reduce your risk and giving you best chances for awesome offspring!

When the very first W&Y’s came into the market, enigmas were still very popular. Although they do share some obvious similarities with phenotypes, people quickly developed an “eye” for both traits. Nowadays, they can be told apart without great problems in most cases. The authors assume that something similar will happen between W&Y and Bluebelly Pastels in the future. Another important factor will be the responsibility of the breeders who work with them: Honest and well-respected breeders will always be able to offer their customers high end Bluebelly Pastels from known genetics .

With the Pastels just being released, we are all currently just starting to dive into a whole new galaxy of our leopard gecko color-morph universe: The first results look very promising. The possibilities are endless and might offer spectacular combos or unexpected surprises in the incubator. Whatever the next generations bring Bluebelly pastels are definitely looking at a bright future!!

Rebecca Hassler studies veterinary medicine and has a great private interest in genetics and reptile medicine. She has sucessfully worked in the standard fish breeding scene before she got her first leopard gecko in 2000. Together with her study colleague Martina Konecny, Rebecca runs www.dragoongecko.com where she is not only focused on linebreeding and polygenetic traits in leopard gecko color morphs, but also tries to sustain several old and valuable bloodlines for the future.