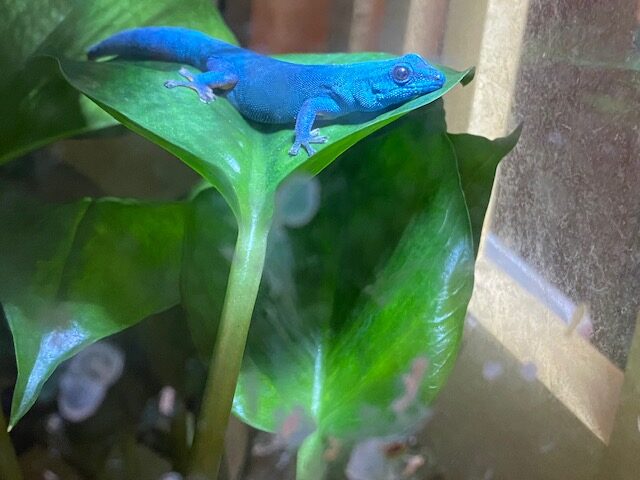 Good morning Mister Blue, we’ve got our eyes on you.
The evidence is clear, that you’ve been scheming.
You like to steal away and while away the day.
You like to spend an hour dreaming.
(from “Good Morning Mr. Blue” by Tom Paxton)

Mr. Blue is an electric blue day gecko, otherwise known as a Lagodactylus williamsi. He’s been sharing my home (literally) with me for the past five years.  Here he is shortly after his arrival in 2016: 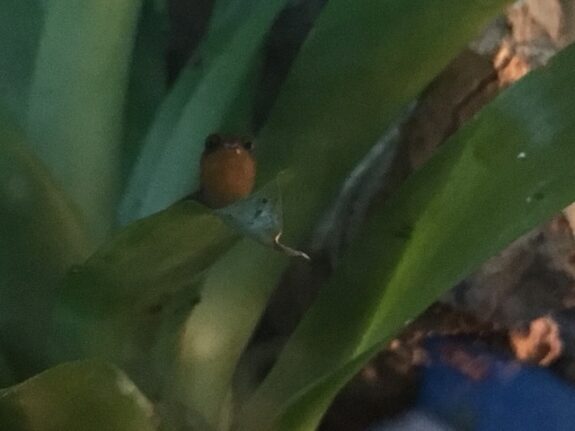 Mr. Blue’s cage is misted every morning.  Twice a week he is fed CGD nectar and three times a week he gets a serving of crickets.  One morning, not long after I acquired him, I noticed him when I performed the morning misting.  Outside his cage.  Staring at me from the wooden shelf unit. 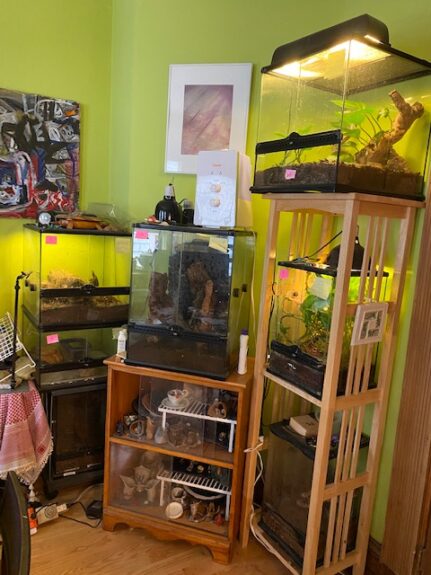 Mr. Blue lives in a well planted 12x12x18 Exo-terra cage in my dining room.  His cage is installed in a narrow wooden shelf unit and he’s surrounded by gargoyle geckos.

Mr. Blue can sit still for hours at a time, but not when a hand is reaching for him.  Every time I tried to grab him, he retreated behind the gargoyle cage or up the wall.  This went on for 2 days until finally I was able to get him down to floor level and grab him.

Since his first adventure, Mr. Blue knows all about cage doors and morning misting.  Every interaction is preceded by a careful look in the cage and the question: “Where are you, Mr. Blue?”.  Sometimes only one of the two cage doors can be opened safely.  You would think that the situation is now under control  . . . 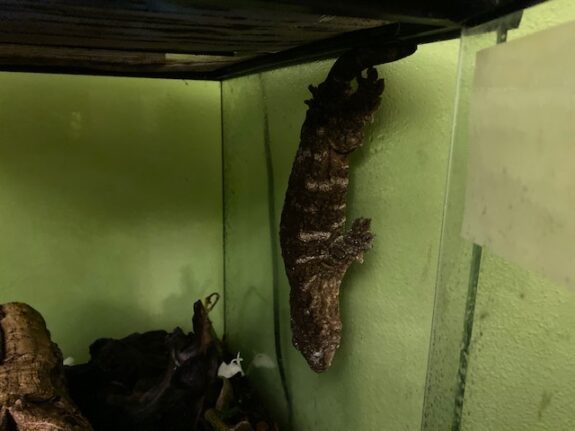 The next time Mr. Blue escaped, he was joined by a companion, my 12″ leachianus gecko, Igor.

Not their fault:  I accidentally left Igor’s cage door open after evening misting, and Mr. Blue beat out my reaction time the next morning when I was misting his cage (you can’t close the cage door when the gecko is between the door and the hinge!). I was lucky enough for Igor to return to her cage on her own.  Mr. Blue, who has a habit of diving off the walls when pursued, hit the ground again and was finally retrieved.

Not a month later, Mr. Blue got past me again!  This time he was missing for a week.  After the first day or so he was no longer observed hanging out on the shelf unit and I feared the worst.  One morning I noticed something on the living room floor.  There was Mr. Blue, 20 feet away from his home, at the far end of the living room with the dust bunnies.

There followed nearly a year of peace and quiet. Mr. Blue hung out mostly under the basking light and slept among the pothos leaves every night.  He rarely moved when I misted the cage or fed him his crickets.  Then he did it again.  Right past my grabbing hands.  He tortured me for 2 days by staring at me from the side of the shelf unit and running up it every time I tried to grab him.  After that he disappeared for a week.  I moved all the cages as far forward as I dared so I could check behind them.  No luck.

One day I thought I saw him high up on the wall above the doorway.

No such luck!  It was the blue geckos on a ceramic tile I made.  Another day I did see him, high up on the dining room wall.  As soon as I tried to get him he dive bombed onto the top of the leachie cage, jumped back to the wall and disappeared. By now, three weeks had passed. I tried everything I could think of:  his CGD bowl was left on the shelf behind his cage, a few quarter inch crickets were deposited (coated with calcium!) on the floor near the cage, and I looked for him high and low numerous times a day with a flashlight.

For a week I had his cage turned 90 degrees so the opening faced the side where he sometimes hung out.  Eventually I returned the cage to its original position in order to be able to keep misting the plants, though I kept the doors open.  It was beginning to look like I would never see Mr. Blue again.  Geckos can go much longer than you would think without eating, but there are limits.  I thought about how ironic it is that a gecko can be smart enough to figure out how to get out of the cage but not smart enough to know that the inside of the cage is the most comfortable and safest place for him to be.

Once again, Mr. Blue got the best of me.  I came downstairs in the morning to look for him again, and this is what I found: 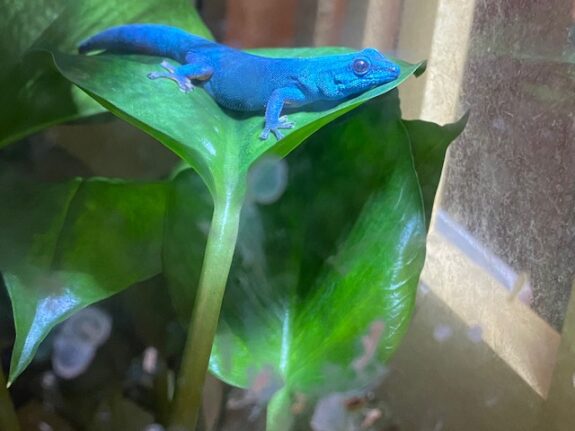 Don’t worry Mister Blue, we’ll take good care of you.
Just think of it as sense and not surrender.
But never think again, that you can think again,
Or you’ll get something you’ll remember.
What will it take to whip you into line?
(from “Good Morning Mr. Blue” by Tom Paxton)