Have you ever gone to the pet store bought a couple dozen crickets, only to wake up the next morning to find half dozen or so dead? I have on more than just one occasion, and I, like all of you out there, work hard for my money and hate to see it go to waste. So, with finances being the driving force and my culinary background being the inspiration to finding an economical, low maintenance, and nutritionally sound alternative, Bug-Bites got its start.

I started off fumbling through the vast corridors we call search engines, clicking, reading, and scratching my head, wondering if cultivating my own feeders was as good an idea as I first thought. But more importantly was the better half going to tolerate such a notion? Or will the geckos, sugar glider and I all be huddled outside for bringing the creepy crawlies indoors? So I figured the only way I could pull this off is if I raised insects that didn’t give off a pungent odor, need a lot of maintenance, and could be housed inside my closet. Yes.. my closet. You know the old saying, “Outta sight, Outta mind”. 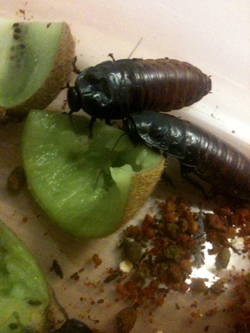 After much research and hours on my iPhone surfing the web, I found the first of the closet cultivars: Madagascar Hissing Cockroaches scientifically known as “Gromphadorhina Portentosa”. These are originally from the island of Madagascar and, keeping true to their names, do hiss when threatened. They do so by forcing air through the tiny holes along the exoskeleton. Being a Sub-tropical roach they are a non-infesting species. However, if you live in places like Florida or Hawaii, that’s a different story, and perhaps the reason that not only Hissers but other sub-tropical species are only allowed to be sold in such climates with a permit.  The Hissers were great and met all of the requirements of low maintenance and outta sight outta mind. Except they moved too slowly for the geckos to really feed on them and their gestation period of sixty days was too long. I needed something that could keep up with the needs of my animals and move around more to stimulate my reptiles to feed.

After overcoming my fears of roaches with the hissers, I delved deeper into the utterly repulsive realm of the roach to find “Blaptica Dubia” aka Guyana Spotted Roach, “Nauphoeta Cinera” aka Lobster Roach, “Blatta Lateralis” aka Rusty Reds and last but not least “Panchlora Nivea” the infamous Green Banana Roach. I was like a kid in a candy store trying to decide which one I wanted next. I spent so much time studying these invertebrates, I quickly became obsessed with having a collection and that’s when the better half stepped in.  Five foot three, one hundred and thirteen pounds shot me a look that could stop a raging bull in his tracks, when the idea of having five different species of roaches in my closet was being tossed around. Needless to say I ended up with the B.Dubia because they breed in only thirty days and that was the end of the roach endeavor for that round.

Satisfied with my choices, life was going great for us and the animals. Then slowly it became more and more evident that more roaches were being produced than what my animals could consume. And by no means was I going to stand by and watch population explosion going on inside my closet to wake up one day to a scene from the movie “Joe’s Apartment”.  And that’s when we made the transition to selling feeder insects while working our 9-5’s and going to college.  Once a few dollars started coming in it also made it easier for me to have a reason to branch out my collection and the better half not having an issue. More creepy crawlies entered but I remained true to my first goals of low maintenance, “Outta sight, Outta mind”, and little to no smell.

Through different forums or online communities I was able to trade what insects I had to acquire some new species. And quite honestly it’s really a common practice amongst members to trade their goods. For 100 small to medium Dubia nymphs (baby Dubia roaches) I gained 30 or so Superworm beetles and two scoops of larvae filled medium, plus 50 aliens or pupae. Thanks to my new friends in Ohio I have a superworm farm established.  The setup was nothing more than two or three drawer plastic dressers from Wal-Mart, a bag of baby carrots, Quaker quick oats and some egg cartons. Beetles breed and lay eggs in the oats and every 2-4 weeks I switch the beetles to a new drawer. The eggs hatch and microscopic Super worms are crawling everywhere. The beetles, just like the worms, get moisture from the carrots. The worms grow and once full grown you just place them into small soufflé cups by themselves to get them to continue the cycle and pupate into beetles.

Isopods are another easy way to obtain inverts that is great for feeders and also to have around to eat the mold and little mites that may be growing in your terrariums. Isopods aka Roly-polies are actually members of the crustacean family. Isopods are more closely related to lobsters, crabs, and shrimp. These guys need an environment that is moist and humid to be able to breath. Housing is very easy: just throw some sphagnum moss in a container with oak leaves, keep it moist and humid, throw in an algae wafer from week to week and in no time you’ll have a thriving colony. They can be caught outside your home but this is ill advised because you have no idea what they have been exposed to.

Chinese Praying Mantis are a great little treat for reptiles and amphibians. You can purchase Chinese mantis ooth (egg sac) from a lot of nurseries and garden supply centers. The ooth is very easy to hatch. Just place it in a container in your terrarium over the section where the heat pad is. And in no time you 200-400 little crunchy crawlers for your pets.

Hopefully this article is helpful and sheds some light on the mystery of how to escape being a corporate zombie to the cricket and its call when there are inexpensive more nutritional options out there. Besides the veggies from your garden always taste better than those in the store right? Then why not give your animal companions the same home-grown love you enjoy.