[ed. note:  At the time this article was written, it was assumed that the aggressive crickets described were Gryllus assimilis.  Subsequent research has determined that these aggressive crickets are not Gryllus assimilis but an unidentified species of the Gryllus genus, sometimes referred to as Gryllus locorojo (which means “crazy red” in Spanish).]

The common house cricket (Acheta domesticus) may soon be a thing of the past. The deadly Cricket Paralysis Virus (aka Acheta domestica densovirus, AdDNV) that decimated the specie in Europe around eight years ago has essentially wiped them out to near extinction here in North America as well. The feeder insect producers have not even had a chance to recover from the devastating financial losses of the mealworm shortage that wreaked havoc on the reptile community in 2008, and we are now faced with yet another feeder crisis.

There is a new cricket feeder being introduced. It is the Jamaican Field Cricket (Gryllus assimilis), and it’s being marketed as the “Super Cricket”, or Black Super Cricket. They are totally black when they are young, but as adults they have dark bodies, and light brownish legs. Their heads are a variegated orange-brown color. The males have short wings, and the females have much longer wings. They are native to the Caribbean, but are now indigenous to Southern Florida and Southeastern Texas. 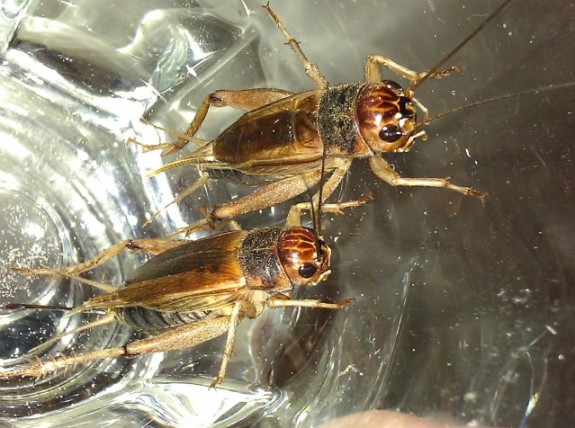 These crickets are very robust, much bigger and meatier than the former cricket so you don’t have to feed as many. They don’t jump as high, are quieter, and are resistant to the densovirus (AdDNV). These crickets are like our ‘domestic’ crickets on steroids.
Sound too good to be true? Well…

These Jamaican Field Crickets are not only big in size, but they have H-U-G-E mandibles (jaws) designed for chomping heavy vegetation. They are aggressive, and can be vicious. They will chomp your fingers (drawing blood!) AND chew on your geckos. These crickets bit my Nephrurus. milii and Nephrurus. levis, stressing them to the point of one dying, and several others to the point of mobilizing all the fat reserves in their tails literally overnight. I woke up to a dead, half-eaten N. milii and there were only 2 crickets in the tub. I have several other rare Australian geckos that have not eaten since they were fed these crickets a month ago, and I expect to lose at least two of them. Even my leopard geckos stayed on top of their hides for days to avoid these vicious bugs, even after I removed them. 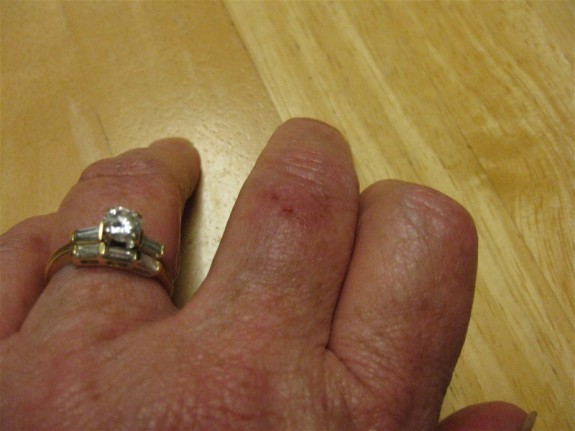 After this devastating situation, I contacted at least a dozen major cricket breeders recounting this experience, and soliciting more information regarding the Jamaican Field Cricket. I obtained detailed facts from Timberline, Ghann’s, and Armstrong’s, a short email from another company that simply stated, “Having these crickets is better than having no crickets at all”. I did not even receive the courtesy of a response from the other cricket suppliers. I also contacted the USDA for information on the potential for environmental affects, but have not received a response from them either.

What I learned from those that did respond is that the cricket farmers are aware that the Jamaican Field Cricket is aggressive and is not an appropriate feeder for many animals, and they have known this since the Europeans  first  started working with them eight years ago. I was informed that raising and breeding this species of cricket requires a permit from the USDA, and as of the most current information I received, they are illegal to ship across State borders at this time. One cricket grower said flatly that shipping these crickets is “breaking the law”.

I posted this information on Facebook and to online forum communities as a warning to others, and since publicly sharing my tragic experience I have been contacted by a few other reptile breeders that also had negative encounters with the Jamaican Field Cricket. One Bearded Dragon breeder reported that an entire clutch of hatchlings was maimed by these feeders, having their feet, toes, and tails chewed. Another claimed several African Fat-tail babies being injured as well. Both of these breeders were shipped the Gryllus assimilis in lieu of their regular A. domestica crickets without notice. One pet store reported to me that they also received the “super crickets” without being prepared for them, and they actually chewed through the shipping boxes they arrived in. I urged them to contact the cricket suppliers with their reports, but they were reluctant to do so.

Businesses and livelihoods are being affected by this feeder crisis. Not only do reptile breeders and keepers have to deal with another blow, but the cricket feeder supply companies are taking astronomical financial losses and employees are being laid off in a challenging nation-wide economic crisis. There are rumors that the cricket breeders are attempting hybridization of the A. domestica and G. assimilis in hopes of creating a less aggressive yet pathogen resistant cricket. We can hope this will be a successful venture.

In the meantime, if we are forced to use the “Super Cricket” as a feeder for our geckos, I can offer the following suggestions:

Finally, ask questions, do your research, and develop an affirmative communication relationship with your feeder suppliers. Report all issues, and provide them with constructive feedback with your experiences – both positive and negative. We must present a united front, and remain optimistic that together we can overcome this obstacle.

Marcia McGuiness has been the owner of Golden Gate Geckos for 20 years, where she has worked with Leopard Geckos, African Fat-tails, Australian smooth and rough Knobtails, Australian Thick-tails, and Western Banded Geckos.  She has authored many articles, been an active advisor on several gecko-related online communities, as well as hosted and made guest appearances on Blog Talk Radio.  Marcia is coming to the end of her legacy as she and her husband prepare to retire to their home in Mariposa, CA., in the Sierra foothills near Yosemite National Park.