It’s a girl! Well, maybe. I did incubate the eggs to err on the side of being female so I’m hoping that things work out that way. In either case I am ecstatic to announce to the world that the remaining egg from the first clutch that was laid has hatched after 49 days to reveal the cute little gecko below. 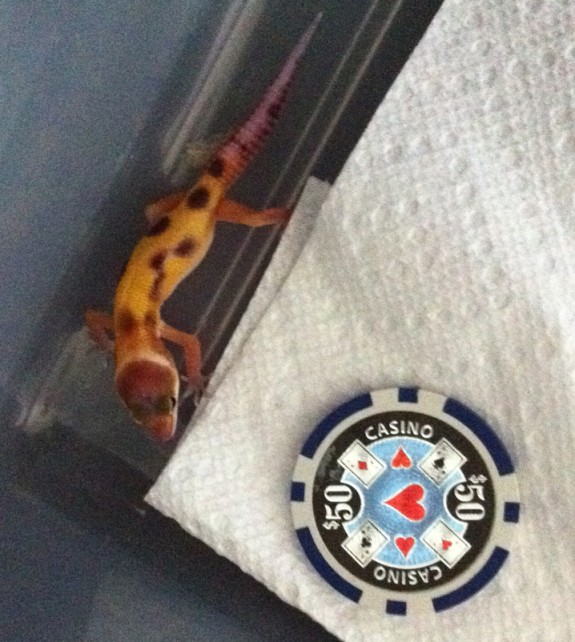 I still have 3 eggs left in there from my SHTCTB female Shiny so hopefully there are more to come. In addition I have bred my Mack Snow Dot to my Sunglow male to start my two year Snowglow Raptor project. As soon as my new addition KC starts to eat on the regular I can introduce the male to her and start producing Sunglow Raptors. Finally things are getting into full swing at Long Island Geckos.

My Tremper Patternless female Slocum still isn’t gravid even after two separate confirmed copulations that were a month apart. With any luck I’m going to find a clutch in the laybox one of these days but it doesn’t look promising.

Another interesting development is that I have decided to introduce a new feeder. Blatta lateralis, or Turkistan Roach, are supposed to be a non-flying, non-climbing species of feeder roach that is easy to keep. I’m going to order a starter colony and once it is established see how my geckos like them. Roaches are supposed to be more nutritious than mealworms and more prolific, making it easier to feed and grow a colony at the same time. This will be helpful as the group I’m feeding grows.

I’m also in the process of building a cabinet incubator from some wood and Lexan. It will be heated by some old flexwatt that I had lying around and from my old Big Apple Herp thermostat until I can afford a Helix. Hopefully I will be able to share some plans and tips in my next article. A second incubator will really help since I do want some males from certain eggs.

I’m obviously still in the hole about $818 since no sales have been made but hopefully I’ll be at the local reptile show in October with some animals and start to recoup some of that money. Until next time; you can follow my activities and find more at Facebook.com. Just search for LongIslandGecko

Justin Hansen's first reptile, an African Fat Tailed Gecko, sparked an interest that ended up consuming a dorm room in New York City and almost getting him expelled. Now that he has the space he is renewing his passion for breeding geckos. Currently focusing on Leopard Geckos he hopes to be able to branch out to other gecko species. He will be found at LongIslandGeckos.com once he has a spare moment to finish the site.