Since our usual leopard gecko breeder, Justin, was unavailable for this month’s installment of his breeding saga, I thought I would take the opportunity to comment on my breeding successes and failures for this, my eighth season. 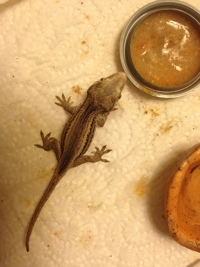 I have had surprising  success with my SW banded gecko (Coleonyx variegatus) breeding pair.  After producing a satisfactory 5 babies during the 2011 season, I was startled when the pair got back “into action” this past October.  The first babies hatched on Christmas Day 2011 and to date I have hatched 17 babies,with 5 more eggs in the incubator.  Although not all the eggs have been fertile, the female gecko has been laying eggs every 2-4 weeks for the past 9 months and continues to be active and healthy with a fat tail.  The male has white and beige coloring instead of the more common yellow and beige coloring.  Most of the babies share this coloration. 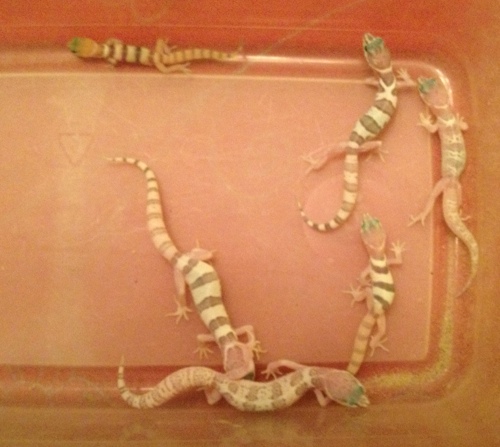 For the first time, I have hatched baby gargoyle geckos which are amazingly cute.  At less than 2 weeks old, their orange coloring is already starting to show.

Thankfully, most of my “failures” have been minor.  One of my two non-producing leopard geckos has failed to produce fertile eggs for 2 seasons despite being paired with 2 different proven males.  The second, a first-timer, has ovulated consistently and re-absorbed the eggs each time.  A third leopard gecko (featured in my article of last season “Leopard gecko genetics and hets/“), who laid 9 clutches last season with a 100% hatch rate, and has laid 7 clutches this season, seems to have had a calcium crash and is showing signs of MBD, evidenced primarily by a misshapen spine and rubbery legs.  Fortunately, with lots of extra calcium and care, she is recovering her weight and  strength and once again eating on her own.  She will, however, not be bred again.

I have had one hatchling with a deformity (shortened front limb) and have had 2 hatchlings fail to thrive and pass away within a few days or weeks.

My biggest misfortune of the season has been the large number of leopard gecko babies found “dead in the egg” nearly at term.  The eggs look good for 7-8 weeks, then collapse and get soft, but instead of a healthy hatchling, I find fully developed babies (once the egg is long past the due date and starting to leak) dead, with yolk sac still attached.  Since I am using the same supplementation and incubation procedures as last season, I am at a loss to explain what is happening.  I do wonder if it’s related to the long incubation times I’m recording: at 83 degrees F, most of my leopard geckos are taking nearly 9 weeks to hatch, although some have hatched at 7 weeks. 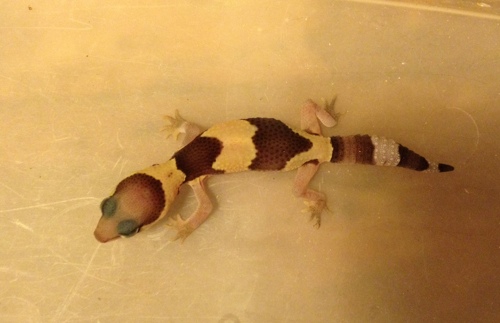 How to balance the successes and failures, to judge the outcome of the breeding season in an objective way and to either achieve the momentum to propel myself into my ninth season or to give up and sell out?  These are issues that arise for any breeder, novice or expert.  The hopeless feeling of watching the third set of eggs fail to hatch, the exhaustion of feeding 60 geckos at 2 in the morning after a full day’s work and home management, are counterablanced by the exciting discovery of an unkown albino gene in a new male and the exponential growth of hatchlings waiting at their bowls for their “dinners” each night.  In order to “get through” the season, a breeder has to keep in mind the details of care and breeding as well as an overview of how things are developing in general.

A tough season can be one that is too successful as much as one that’s not successful enough.  I often refer to 2009 as my “season from hell” because I produced so many offspring (nearly 90) that I started to run out of room to house them and out of time to feed them.  That season I bought 10,000 mealworms the first week in August and was worm-less 4 weeks later.   It’s imperative that a successful breeder judge carefully what volume she or he can reasonably manage and make every effort not to exceed that amount.

At the mid-point of my eighth season, I am somewhat confident that there will be a ninth season.  The joy of bringing new and beautifully colored life into the world still trumps the daily frustrations, time and energy I’m expending.