“Are you really sure that a floor can’t also be a ceiling?”
― M.C. Escher

All of my life I have been drawn to drawing, photography, and art.  Although I’ve never painted myself an artist, in my heart of hearts, it’s who I aspire to be.  As a young Squee, my sisters and I would circle up on the living room floor, drawing the cover images to Disney movies, like “Beauty and the Beast” and “Pocahontas.”  This character craze transitioned with age, from a lasagna lovin’ feline named ‘Garfield’ to a deranged, homicidal, crack-head freak called Johnny.   While the subject of interest has changed over the years, my passion for art has only grown stronger; and once I caught a glimpse of the smorgasbord of beautiful leopard gecko morphs available in 2012, I knew my next victims had arrived.

Not only are geckos ever-changing pieces of living artwork, but through selective breeding, they become breathing canvases on which we place our signature mark.  Beyond the obvious aesthetics woven into the fabric of each animal, is an art project waiting to be designed!

Anyone who has ever seen Escher’s ‘Drawing Hands’ or impossible architecture, has been challenged to understand a 2D image in three-dimensions.  This is my primary influence, when it comes to the images showcased in this article.   Playing off of Escher’s lively drawings that emerge from the piece of paper, I was inspired to try utilizing photographs as the 3D component in these morphing images.

This process begins with an interesting photograph of a gecko (hatching WY) [1], which is then sketched out onto paper [3].  The desired half of the photograph is cut out using the magnetic lasso tool in photoshop [2] (I use version CS4, but any version will work).   The cutout photo is then pasted onto the drawing [background image], moved into place using ‘free transform’ and blended together using various tools, such as the clone stamp, easer, and blur tool.  Levels, brightness/contrast, and vibrancy are adjusted to optimize colors.   The end result [4] is, hopefully, a convincing transition from the 2D artwork to the 3D animal emerging from the paper.

This process can be applied to a variety of compositions, to convey different emotional responses.  Here a Carrot-head Enigma surfaces from the parchment, to investigate the culprit tugging at his tail. 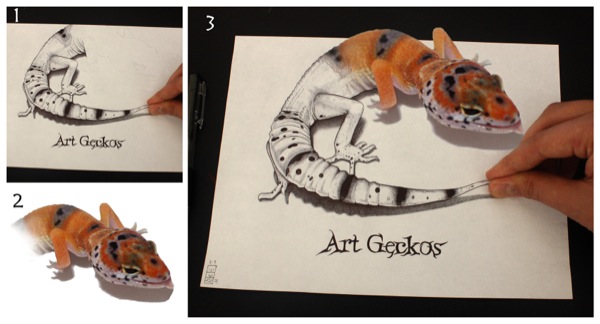 My 4 yr old niece, Amira, will be quick to remind everyone that “its not good to grab animals by the tail” …even if the tail you’re grabbing doesn’t exist apparently.
Perhaps the most striking image of this series of pictures showcases a Snow Lavender Reverse Stripe.  Likely, the reason this image is more persuasive is due to the continuation of the dark striping, stitching together the drawn and real image.  While these half-drawn images take about 8-10hrs to complete, when a drawing component is not involved, morphology pics can be done in 1-2hrs. 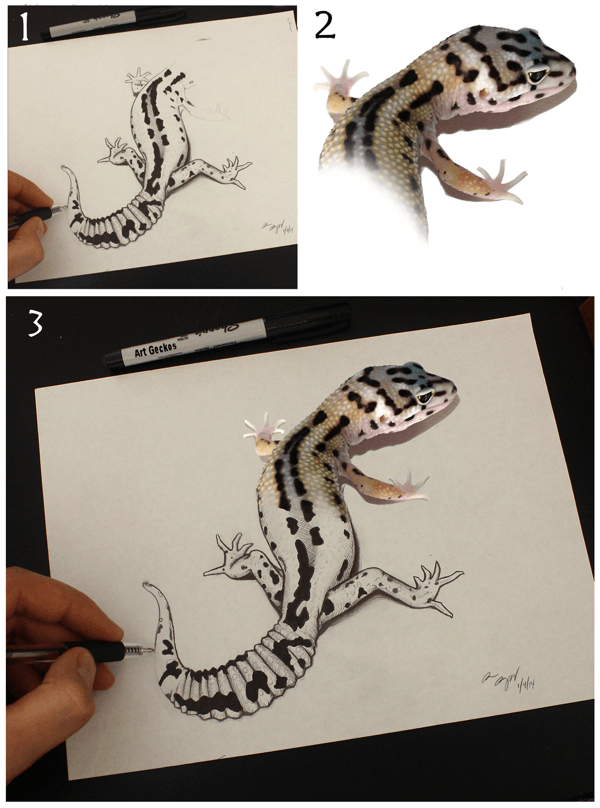 Continuing with the morphology theme, I began thinking about morphing geckos with other objects.   I had no idea that combining hatching geckos and fingers would be so grotesque.  In fact, it never even crossed my mind, that this is a disgustingly spooky image until it was posted on facebook, and the comments began rolling in:  “Thanks for the nightmares”,  “Eww”, and my personal favorite “This is the creepiest picture I’ve ever seen, please remove it.” 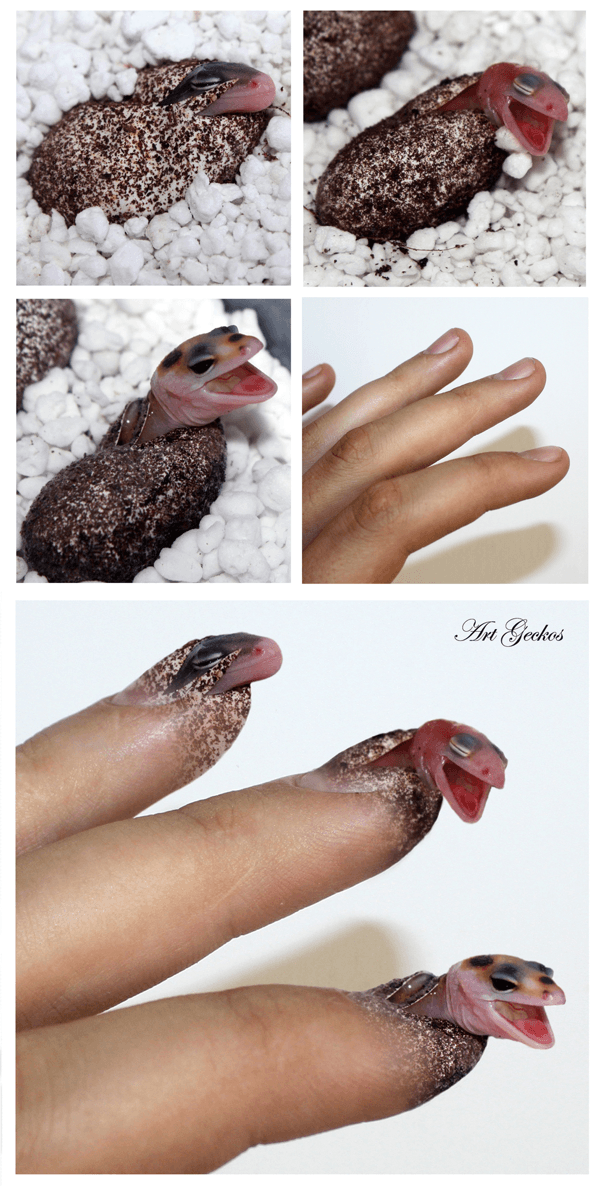 It was at that moment, the true eeriness of the image revealed itself to me… so, I immediately printed 250 business cards.  😉  Controversy sells.

In effort to evoke a more pleasant sentiment in the viewer, a new series of morphology pics were developed, using fruit as the counterpart.
Here a hatching High-Contrast Super Tangerine Tremper was manipulated to create the illusion of a gecko hatching from within a strawberry.  The background image [3] inspired the idea.  A strawberry was photographed on the same background as the gecko [1], so when it is cut out [2] and pasted into place [4] the edge of the strawberry will blend with the existing background.

[If strawberry were shot on a black background for example, the final image would have a black outline around the strawberry]. 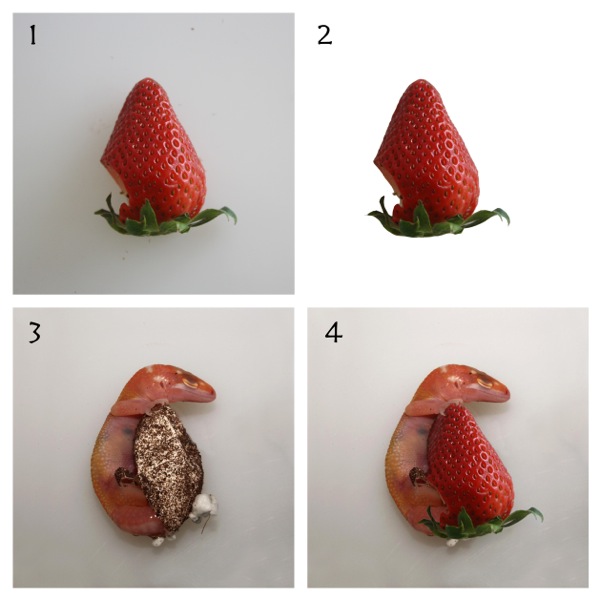 To make the images as convincing as possible, objects with a similar shape are used as the counterpart, and if these objects have different size, it makes for an interesting study as well.  For example, kiwis and gecko eggs. They have a similar shape, but significant size difference.  So, when they are combined into a single image there are two confusing factors for your brain to explain. 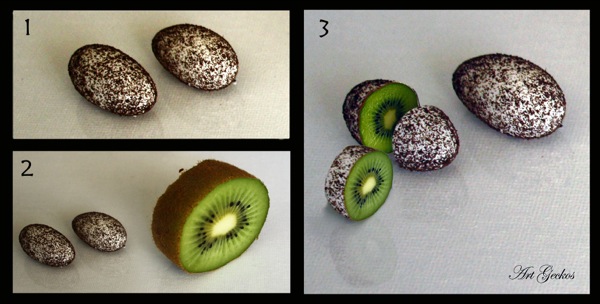 Also, texture is fun to play around with.  In this image, a HC^2 gecko has pipped her egg.  By superimposing the texture of a strawberry on the gecko’s face, we’ve just created a new morph!  A Strawberry Eclipse “GMO Project” 😉 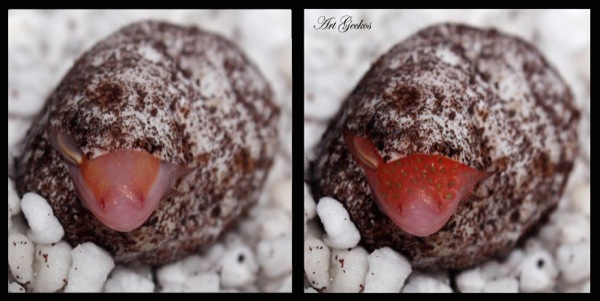 If your tastes are a little more twisted, you may want to make an a-peeling gecko.  This process begins by peeling a lemon, orange, or lime and arranging the peel into a twisting cylinder.  Then photograph your animal is the same position, so when the peel is cut out with the magnetic lasso tool, it will line up with the torso of the gecko! 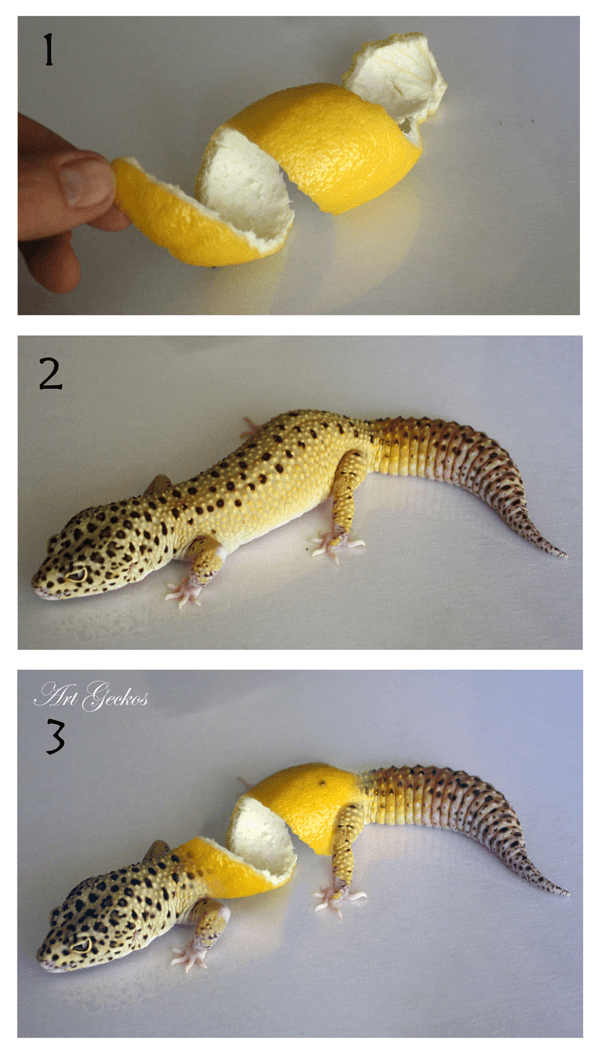 Many of these images stem from experimenting and playing around in Photoshop, without any predetermined direction.  For example, making a mirror image of a simple composition begins to reveal new patterns.

In this case, I began with a staged picture of an eclipse’s tail next to her clutch of eggs [1].  At the top of the menu in Photoshop, click ‘image’ then ‘canvas size’.  Double the width of the canvas; select the original image, and click ‘copy’ and ‘paste’.  Now you have created a 2nd layer; click ‘edit’ then ‘free transform’ and slide the left side of the image all the way to the right edge of the canvas.  Now you have a mirror image of the original picture [2].

By repeating this process, and flipping the image vertically, we get image [3].  It wasn’t until this stage, that I realized, this kinda looks like a gecko eye socket… so, taking the idea one step further the eye of a WY [4] was cutout and pasted into place [5].  This image would never have come together without experimenting, thus I encourage all of you to engage with this great computer program and see what your imagination reveals to you.

You never know what your mind may create: a serene hatchling, twins, or even triplets!  The sky is not the limit!

Ben Bargen is the owner of Art Geckos in Reno, NV. He has owned leopard geckos since 2003. He recently graduated from UNR with a bachelor’s degree in neuroscience. His background and passion is in medical research. Ben enjoys logging hours backpacking, mountain-biking, and snowboarding in the Sierra’s. www.facebook.com/ArtGeckos.Ben