About a year and a half ago my girlfriend and I fell in love with the videos on YouTube showing how affectionate Giant Day Geckos could be. Since I used to keep other lizards in the past including a few leopards geckos, I figured we could manage it. So I did tons of research, joined forums and asked questions until I felt comfortable enough that I could provide the best possible environment for them. I ordered everything we needed for the vivarium,  set it up for them and waited anxiously for the weather to break so that they could be shipped from a breeder.

When they finally arrived they were just hatchlings. We asked the breeder for a male and female so they would coexist better because I had read that same sexes really don’t so well together. He informed us that he hatched at a 50/50 ratio temperature so there was no guarantee they were male and female. The only way to sex them would be to wait until they became adults. Not long after they were settled in there was unusual activity in the vivarium. One hatchling was a little bigger than the other and he (Ziggy) was picking on her (Izzy). He had bitten part of her tail off and she always looked on guard with her mouth opened. So we had to separate them to keep him from picking on her.

About 10 to 11 months later when they were pretty much full grown we put them back together in the 18x18x24 Zoomed vivarium that had fully grown out by that time. They checked each other out then went about their own ways. About four to five weeks later we saw Ziggy bobbing his head and strutting around in the enclosure. Then Izzy did the same. We just figured they were socializing with one another and didn’t think anything of it. Then we started to see it more often, so I looked it up and sure enough they were mating!

I did some research  about how to incubate the eggs for this species and got my incubator set up and ready!! Next thought … Where am I going to put the hatchlings?? I’m not a breeder.. So with a lot of thought and research I came up with a hatchling enclosure that will house 4 hatchlings. 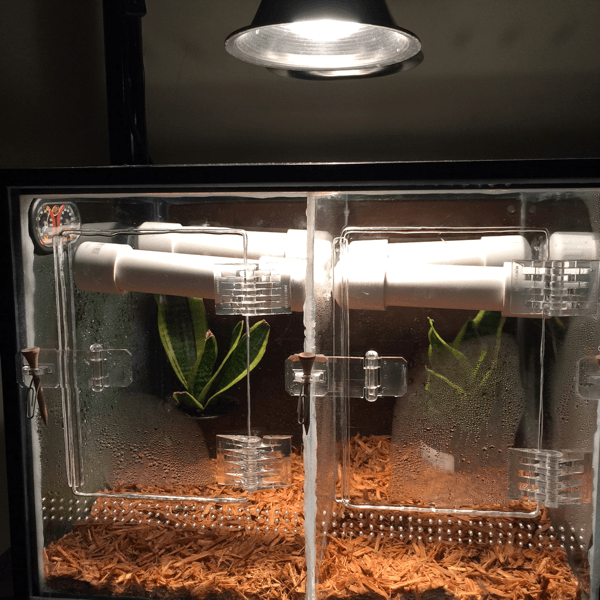 Here are the supplies and tools I used to build my enclosure:

I used a 1/4 inch diamond glass bit and a hole template I made from 1/4 inch acrylic to drill 4 holes on each section centered in the top back of the enclosure. Then I drilled one in the back wall of each section for a future auto mister hose.

I measured and cut 1/4″ acrylic walls for the inside of the enclosure. Once cut, I used white gorilla glue to glue in place. After it dried, I cleaned the excess glue off  and then used aquarium safe silicone to cover the seams.

I cut the piece of acrylic for the front of enclosure.

With the film still on the acrylic, I measured where I wanted my doors and where my hinges an hasps would mount. Then I cut my doors with a dremel.

I laid the front on a flat surface and welded the hinges and hasps onto the front of enclosure.

I used 100% acrylic silicone for plastics to attach the front to the tank.

I taped it up and spray painted the back glass brown.

James Fenton has been a reptile hobbiest for years now and has kept anoles, iguanas, leopard geckos and now giant day geckos. He also has a brazillian rainbow boa. James has always tried making any hobby simpler so it enhances the animal's life.