Many years ago, I purchased a Sunglow male leopard gecko from reptile breeder Garrick DeMeyer.  I loved this gecko from the first time I saw his picture online, and knew I had to have him.  When he arrived, I was ecstatic, as he was just as beautiful as in the picture.  He was about 80g when he arrived, and was quite terrified to say the least.  I named him Sunny, because of his brilliant yellow orange coloration.

Sunny hid for a long time and would not eat, so I knew he would be a work in progress!  I tried every feeder insect to no avail.  Then one night, I took him out on the arm of the couch, and dropped a fresh waxworm in front of him, which he grabbed enthusiastically.  He continued to eat about 10 like that, and I knew we had finally turned the corner with him.  He became my new buddy, and began to eat other insects as well.  His personality quickly began to develop.  His name then evolved from Sunny, to Sunny Bunny, and then, to Bunnyman.

Bunnyman became one of our most prized geckos in our extensive collection.  As those who have read my book, The Leopard Gecko Advisor know, I have specialized in the socialization and enrichment of leopard geckos.  Bunnyman was the ultimate challenge, because of his initial skittishness.  I knew though that if I continued to work with him I could bring him around with patience and kindness.  That effort proved very fruitful.

Bunny now sleeps with me!  Yes, you heard it right.  He will lie in bed with me in the morning and I’ll fall asleep with him lying next to me for a couple of hours almost every morning.  He never has an accident, nor does he leave my side.  He also watches TV with me and my wife in bed every night for a couple of hours.  His favorite re-run TV show, Two and a Half Men, is something he looks forward to each night.  He knows the characters and watches each show intensely.  The show’s song has even evolved into his own theme song, “Bun Bun Bun Bun Bunnyman!”, which I sing to him when the song comes on during the show.  He loves it!

Bunnyman also enjoys looking at my smart phone as I scroll through the pages.  He tries to climb onto the phone and swipes at it to get it to move.  Bunny is not your ordinary gecko.  We have grown to love him like a son, and we know he won’t live forever so we cherish every single moment we have with him.  He has enriched our lives beyond words.  He shows how these little reptiles can evolve if you take the time to work with them.  I encourage all gecko hobbyists to give this socialization effort a try.  You just may be lucky enough to have your own Bunny….

Best of luck in your gecko pursuits, and thanks for reading my silly, but heartfelt true story about our beloved gecko, The Bunnyman.

Editor note:  Here’s a bonus picture of Bunnyman as a juvenile: 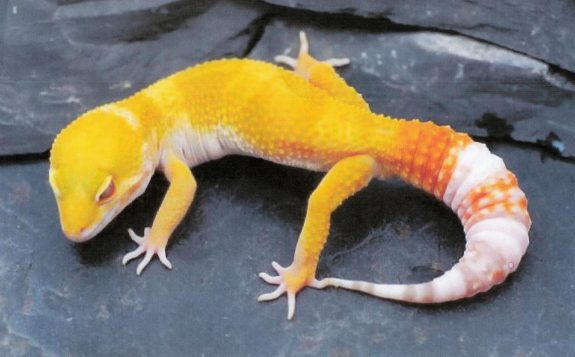 Ray Roehner began collecting and studying reptiles and amphibians at the age of five. When he was 14, he worked in the animal labs of a major cancer research hospital where his interest in animals, and in particular high quality animal care and husbandry, nurtured his desire to work in the animal field. His subsequent science degree, coupled with his certification as an animal technologist, put him on the career path to manage the animal research efforts of two major companies in cancer and diabetes research. His love for reptiles continued and he became fascinated with leopard geckos, studying them and developing a high quality care program based on the many studies he designed and conducted to develop cutting edge care protocols to produce and maintain leopard geckos of the highest quality. He felt a calling to write this book so he could share his work and knowledge with others in order to further the hobby and most importantly to him, to benefit the well-being of the animals that he so truly loved.