Australia is a country like no other. Lush rainforest coasts and woodland mountain ranges transitioning to sandy deserts and tropical gorges have resulted in an evolutionary boom leading to an amazing diversity of lizards. A large proportion of the diversity, especially that unique to Australia, are the geckos. Australian geckos belong to four families, three totally endemic to Australia and surrounding islands. Diversity within these families is huge with 143 already recognised species and as many as 10 species being added each year. It is certainly arguable that few better places exist to find geckos in the field than Australia. 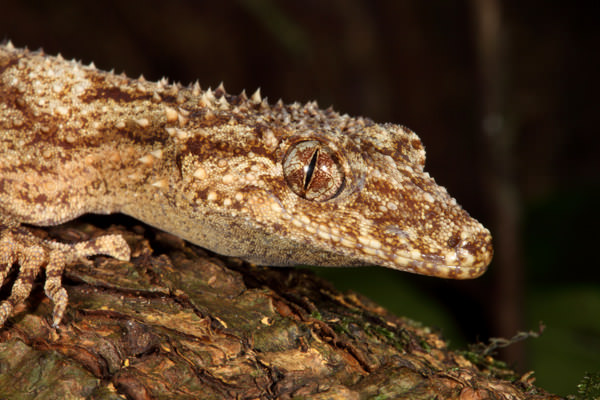 A Leaf-tailed Gecko from the rainforest of Australia’s East Coast.

As a resident of Australia keenly interested in both geckos and photography, I have been lucky to spend a great deal of time over the past 5 years travelling throughout Australia and photographing different species of gecko and other reptiles. Field herping in Australia is a truly great experience with many national parks preserving not just good habitat but often some breathtaking scenery. My fascination with geckos has led me into the arid zone of Australia, for which I have developed great affection, many times. There are few things I enjoy more than walking along desert sand dunes late at night seeking geckos in the warm night air. 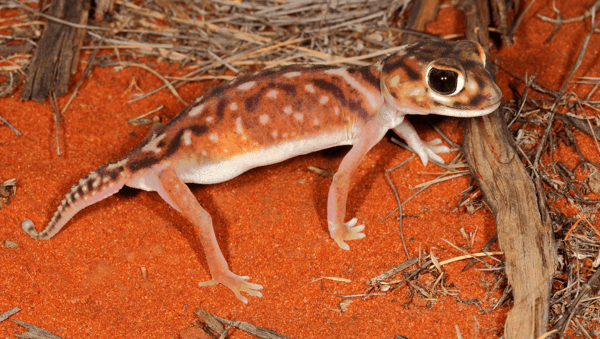 Pernatty Lagoon Knob-tailed Gecko’s are found only in an isolated pocket of South Australian sand dunes.

Preparing for the field

Getting ready to go into the field is one of the most important parts of field herpetology. Many factors influence preparation for a trip: where and when is it best to go, what can you find there, knowing exactly where you will look for them and getting local information. Deciding where and when to go can be a tricky decision. Often I want to find a particular desirable species and discover that it’s impossible to go during its peak activity period, lowering the chance of finding the species I am after. A general rule with geckos in Australia can be: hot is good, cold bad. Geckos, being nocturnal, need warm nights and the best times to search for them are warm mid-summer nights when some sand dunes are literally swarming with geckos. So what do we do during winter? Head North and South of course! North may seem self-explanatory, higher temperatures year-round lead to gecko activity even through winter. South on the other hand is not so logical. In fact many of Australia’s geckos are legless, belonging to the Pygopodidae. Many of the southern species of this group spend the hot summer hiding deep in cracks and only during the wetter winter do they shelter in in the upper leaf-litter.

What you’re looking for and where to find it are also important considerations. More often than not I’m looking for specific target species. Finding out the distribution of this species is usually not good enough; we need to know the exact habitat requirements and then locate (in advance) a place where these requirements are met. Most of my time before field trips is spent researching exactly what habitat is needed to find the 20-30 species I might target, and looking through as many photographs as I can possibly find to get an idea of sites before using satellite mapping to find an exact place I will target. Of course getting advice from people that have visited this area before is always preferable.

Ok so you’ve prepared for the field and now you’re actually out there, ready for the most fun part of the whole experience, finding the geckos. Of course this often turns into the most infuriating part for novice field herpers because the most important bit is missing…. finding the geckos!

A few simple tips can make a big difference between success and failure here.

Learning how to use eye-shine. Eye shine is the reflection from an animal’s retina when their face is illuminated by a flashlight. To detect eye shine using a flashlight the surrounding environment can be scanned, the eyes of geckos reflecting back a dull orange-red colour.

This is by far the quickest and most effective method, but it is hard to master. If you can, practice this at home with pet geckos in their cages. Mastering this can quickly turn a barren plain into a twinkling gecko minefield.
Don’t look away from your target. Once you finally manage to spot a gecko using eye-shine you can approach it.  Unfortunately between spotting it and approaching it the eye-shine often vanishes, the person loses where the gecko was and no geckos are found. As soon as you see eye-shine you must look directly toward the spot where it was seen, walk exactly to it and don’t look away.  Many times the gecko will have only the tip of its nose hanging out of a burrow. 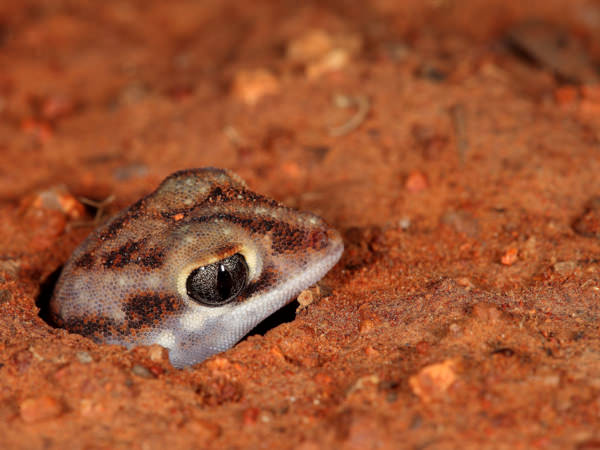 A Beaked Gecko peers cautiously from its burrow, ready to retreat at a moment’s notice.

While eye-shine is a great technique, it is hard to master, and it is sometimes just as useful to use your ears to find geckos. While geckos don’t vocalise, walking along a clear path and listening for rustling in leaves to the side and carefully looking for things you hear can turn many up. Better yet you will likely find other great reptiles too!

Look directly on dark. This is a rule that applies especially in the arid zone. Start looking even before it’s fully dark. In some areas of the arid zone, especially at certain times of the year, geckos will only be active in the first 20-40 minutes after dark, after which they retreat to their burrows. Miss this time period and you might end up seeing only 2-3 species when you could have found as many as 10.
Look everywhere. It may seem obvious, but geckos occur in a great variety of places: some are under bark, some on rocky outcrops, in the middle of dense foliage or peering out of old spider burrows. Don’t get stuck looking only down at the ground, or just into the branches of trees. Shift your focus around and you will find a much greater variety than in just one habitat. 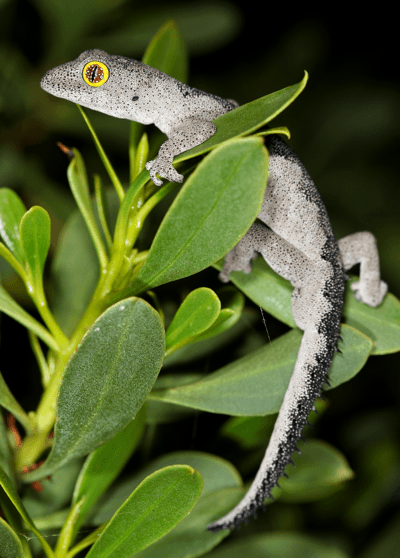 A Soft Spiny-tailed Gecko found amongst the foliage of a coastal shrub is typical of this group which like to seek shelter in dense foliage, even during the day.

Having spent so much time searching for geckos and seeing so many species, I have many fond memories of those I’ve found. Some particular highlights that spring to mind include finding a wild, patternless mutation of the Thick-tailed Gecko species, and finding my favourite species for the first time, the Midline Knob-tailed Gecko. 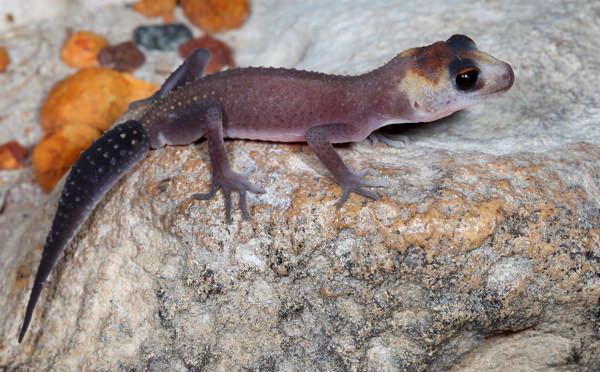 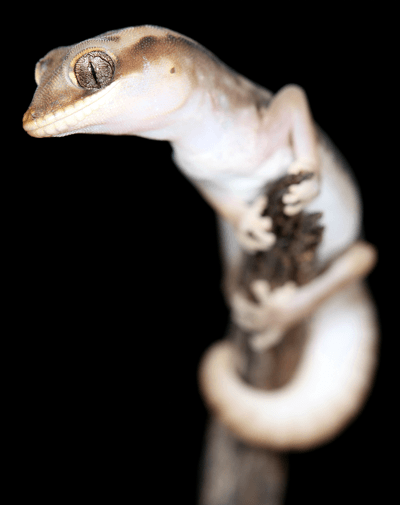 A Western Stone Gecko perches atop a stick within the West Australian arid zone.

Giving tips about photography is something I am often asked for but find it hard to give a good answer. Much of photography comes down to individual style, and composition, which is too subjective to really define. There are a few things that stand out for me:  good lighting and natural posture.

Good lighting is perhaps the second most important feature of a photo, directly after it being in focus. People use a range of lighting setups but one that appears to give particularly good results, seems to be two flashes on either side of the lens controlled by the built in flash. This is the general setup I use, and it works well for me.

This Burton’s Legless Lizard is actually part of the gecko family Pygopodidae, though it is known to eat many other geckos with its specially hinged jaw. 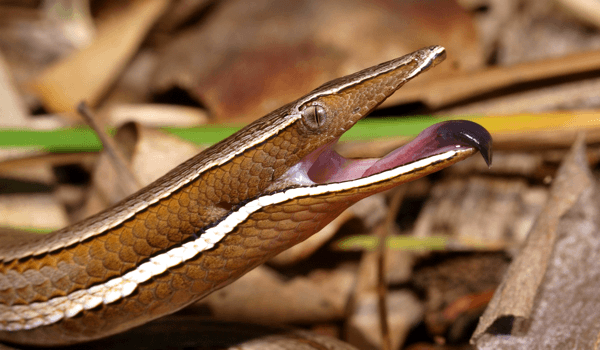 Natural posture is something that nature photographers could probably argue about for the rest of eternity. Some may say this means exactly how the animal is when found. I, on the other hand, use it to describe the situation where the animal is sitting up comfortably, appears active and does not look overly handled. A gecko is a great animal for achieving this on warm nights, with many allowing the photographer to pick them up,  put them down, allow them to walk a few steps and then use a twig to curl its tail into the frame. Alternatively, arboreal species placed on a dead branch will often simply walk to its end before stopping. It should be mentioned that touching geckos without the appropriate license is illegal in Australia, so all possible measures should be taken to achieve results like this without contact. 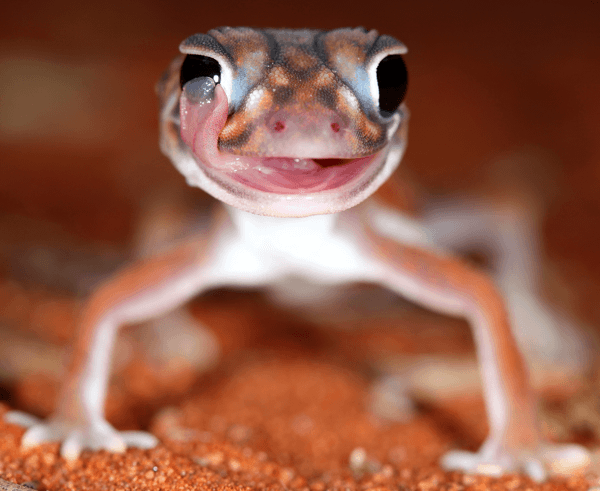 My favourite species, the Midline Knob-tailed Gecko which is found only within a small area of arid zone in Western Australia.

Stephen is an Australian University student studying biology and ecology. In his free time he enjoys nature through bushwalking, looking for reptiles and photography. Stephen also keeps a variety of native Australian geckos include Nephrurus, Strophurus and Gehyra.