When a person joins the hobby of reptile keeping and makes the decision to breed animals of any species, they silently make the acknowledgement that they are going to be playing god with the species they choose to reproduce. Not only accelerating evolution through artificial selection, but also picking and choosing which ecological and evolutionary forces, or lack thereof affect their breeding populations. A few key concepts to consider are Gene Flow, Genetic Drift, and the Founder Effect.

Before we dive into the meat of the lesson to be had here, let me explain these concepts. 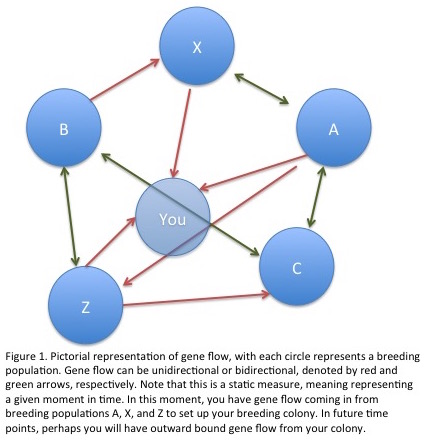 Gene flow is just that: the flow of genes between populations. This flow can be uni- or bi-directional. In the context of the hobby, you can think of your breeding groups as populations (see figure 1.) So gene flow could mean adding ‘new blood’ to outcross your breeding group from Breeder X. If Breeder X sends you an animal unrelated to your groups, those are new genes flowing in to your population. (It is important to keep in mind that there are far more genes that make up the genome of the animals other than the ones resulting in differences in phenotype.)

Genetic drift is the probability of new alleles in a population being ‘lost’ or ‘fixed’ in the population (see figure 2.) The simplest way to envision this is to think of albinism in wild caught specimens. Albinism randomly pops up when alleles associated with the phenotype are mutated. But the phenotype (albinism) results in a reduced fitness, so the animal is slightly less likely to survive to reproduce, so that allele may be lost quickly in a population. Conversely, an allele contributing to increased reproductive success, such as one contributing to male coloration in species where females prefer brightly colored males, will likely be ‘fixed’ in the population- meaning that other alleles are not likely to be found when surveying the population.

Now to get down to the meat of what this article aims to discuss.

How to take these concepts into consideration

Let’s preface this by noting a necessary distinction between breeding for maintaining genetic diversity (conservation breeding) and breeding to fix a certain genetic trait (line-breeding). In the context of conservation style breeding, you are looking at broader strokes, in the entire frame of the genome, not just thinking in the context of specific alleles.

In line-breeding, yes, you’re trying to keep healthy genetic diversity, but meanwhile increasing the prevalence of specific alleles. Therefore, when making considerations for line breeding, you narrow the scope of genetic material you’re thinking about to the alleles affecting a desired look. Alongside of those alleles, instead of thinking about all alleles contributing to the health of the animal, you only take into considerations ones that negatively affect the health of the animals, so line-breeding therefore narrows your ‘field of vision’ (per se), to a handful of alleles in consideration.

Something few people consider when making the decision to breed any species, is maintaining genetic diversity. Sure, most people at least think to not pair siblings. But how can you maximize the genetic diversity in your breeding groups, in order to minimize inbreeding? Secondarily, why is such a task important? 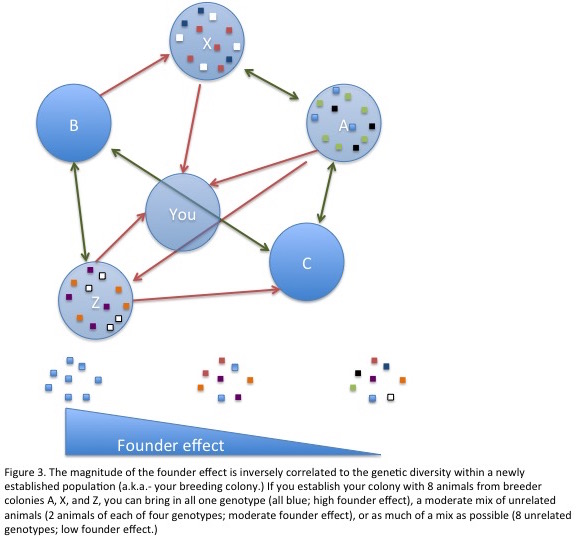 Let me address the importance first. Keeping this diversity –hopefully serving to prevent alleles from being lost from your population due to genetic drift– and avoiding chronic inbreeding is a necessity for any species. However, there are things to consider when assessing how quickly inbreeding will have negative effects. Typically, species with short generation times (i.e. quickly maturing to reproduce, such as leopard geckos) can be affected quickly. However, relative to animals with long generation times (i.e. slow growing to sexual maturity, such as tortoises), the generation counts until detrimental effects manifest themselves may not be drastically different. The reason we may see effects more quickly in fast-maturing species is because their generations are short, so they, for example, may span 15 generations in 15 years, whereas tortoises would have a much more elongated generation time (which will vary based on species.)

The question then becomes the first I asked; how to maximize the generational count before inbreeding takes a toll. Or better yet, simply how to minimize the extent of inbreeding.

When thinking about inbreeding, many people think primarily of mother x son, father x daughter, and sibling x sibling. However, there is still a degree of relatedness between half-siblings and so on.

Breeding programs for conservation take much, if not all, of this into consideration when determining which animals will be paired. This is why we frequently see endangered animals shifted among zoos and breeding facilities. But why should a species need to be endangered for similar precautions to take place?

Thinking about the hobbyist breeder, who has limited space and resources available to them, how might someone of that caliber be able to do their best to take these factors into consideration?

The answer for the hobbyist breeder lies within their foundation stock and careful planning, not only for the coming season or two, but also for the seasons beyond. There is a certain level of genetic diversity in every hobbyist’s foundation breeding stock. Careful considerations should be made when obtaining beginning stock. Sure, some breeders may offer great group discounts, therefore saving you money. However, getting founder animals from various sources maximizes your success at maintaining a degree of diversity (see figure 3) down the road.

So far, I’ve been stressing getting a founding group that has as much diversity as possible. Is that the only way to minimize inbreeding, or are there other ways to do so as well? 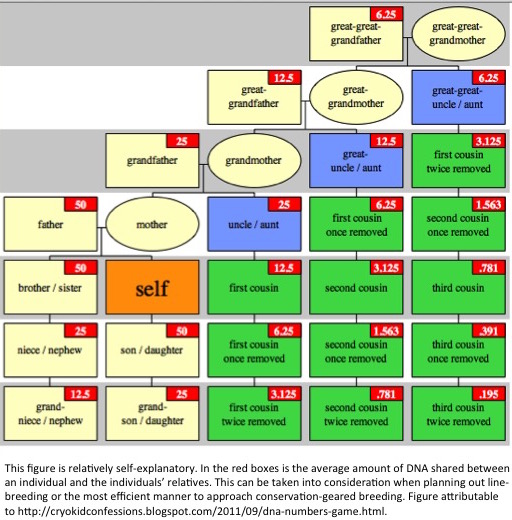 There are certainly other ways of keeping the diversity in your breeding groups. Understanding the relatedness between animals (see figure 4) is the key to this, as well as periodically opening your populations to incoming gene flow.

Taken together, the key to keeping genetic diversity in your breeding populations, regardless of the species you choose to breed, is minimizing the initial founder effect (high diversity in initial foundation), and periodically allowing incoming gene flow (outcrossing every few generations)- both serving to minimize negative effects of genetic drift and inbreeding depression.

Once these factors are accounted for, the planning for the pairings for years to come can happen. In the event that you are line breeding or simply looking to propagate a species, it is best to start at least two parallel lines, that will have limited interaction. From there, you would want to minimize the relatedness of each individual pairing.

So as a quick and simple example to take all of these factors into account, if one were to take a crack at propagating a species, and planned on starting with 5 animals, it would be ideal to obtain 3 males, and 2 females. Each would ideally hail from different lines, minimizing founder effect. The optimal five year plan for such a group of animals would be (if simply breeding for propagation while maximizing the genetic diversity of pairings):

Additionally, keep in mind the usage of animals here is entirely hypothetical. Many people suggest a founder population of at least six males and six females so that a similar, yet more extrapolated ‘road map’ can be followed. There are many other species-specific factors that will influence ideal founder populations and road map planning. One in particular will be whether a given species is known to retain sperm, and if so, how a female from that species is known to delegate sperm usage (i.e. if courted by multiple males, which male is more likely to have fertilized the offspring.) Depending on how said female partitions sperm, it may be more beneficial to have more males in your founder population, since a single female has the opportunity to fertilize from multiple males. In the event that a single male’s sperm will always outcompete the others (i.e. last male courted fertilizing all consequent offspring), then it would be best tip the balance to being female heavy.

When breeding, it is crucial to take these concepts into consideration, such that you can maximize the diversity, therefore minimizing the health risks of the offspring you bring into the world. However, it is critical to open the gates to gene flow every few seasons? No, not exactly. You could line breed for generations without seeing much in terms of negative effects. However, keep in mind that such effects will not always present in a physical manner, but may be affecting the animal’s development, digestion, brain circuitry, etc. It is best to outcross as often as possible as a preventative measure, such that you are serving to your best effort at avoiding inbreeding.

Dillon Damuth is a small scale breeder, Gecko Labs. He would like to start off by thanking the Late Night Leos crew for the tremendous moral support in the early stages of this project and for their help in promoting the project thus far. (http://www.blogtalkradio.com/latenightleos)
Dillon has owned leopard geckos since 2002. Recently graduating from Elmira College with a bachelor’s degree in Biology and Chemistry, Dillon went straight on to graduate school at Georgetown University, where he is now pursuing his PhD in Biology while studying developmental neuroscience using frogs as a model organism. Dillon enjoys spending time immersing himself in nature, be it through hiking, camping, snowboarding, or simply spending time at the area’s zoos.