There has been much interest lately in the genus Ptychozoon, which can be as difficult to acquire as to pronounce (TY-ko-zone –the “P” is silent).  There are 8 species of Ptychozoon, more commonly known as the “flying gecko” or “Parachute gecko”, though generally only P. Kuhli is found in the pet trade.  What could fail to fascinate about a gecko that can fly?  Though of course, more correctly, it glides, space permitting.

As usual, our 3 expert keepers have responded to the following questions:

1. Which species are you keeping?
2. What got you interested in this (these) species and where did you get your first one(s)?
3. How are they set up? Describe your enclosure
4. What do you find most interesting about them?
5. What do you find to be the biggest challenge?

I am keeping only Ptychozoon Kuhli at this time.  It is very difficult to acquire other Ptychozoon species.

I got my first P. Kuhli from a local pet shop that didn’t know what they were in 1984.  They were listed as “flat tailed house geckos”, and I bought the two that they had.  I got lucky and ended up with a pair and started producing my first hatchlings n 1985.
I set mine up in 40g tall style tanks.  I use lots of cork, bamboo and plants with isopods and 3″ of substrate.  I provide both heat and UVB lighting.

Their cryptic appearance and rich colors are a great draw.  I love their hunting behavior and vocalizations as well.

The most difficult thing with Ptychozoon’s is rehabbing wild caught animals.  They come into the country is such terrible shape and covered in mites.

I had previously seen Flying Geckos for sale at the numerous conventions I attend each year, but never pursued them due the few focused genera I was working with at the time.  This all changed when I saw the Ptychozoon kuhli from the peninsular Malayan region. These were fairly larger in scale and had darker coloration and patterning differences from others inside their range of South East Asia. I received a large group of handpicked WC Ptychozoon (Large Form) kuhli from Dan Mulleary of DM Exotics. What attracted my interest in the species was the notion that they could “fly” or literally “glide” from a higher stationary place to a lower point as an additional means of adaptive locomotion. Just from a glance at a P. kuhli, its unusual body structure is mind blowing: the folded flaps of skin, large webbed feet equipped with sticky toed suction, and a long serrated tail that resembles the infamous tail from the creature portrayed in The Alien movies. I just knew after seeing them in a person this gecko had a cryptic appeal that is a must in any geckophile’s collection.

Initially, I split up the large group of P. kuhli into two groups of 1.2, with each group having its own enclosure. I knew these geckos needed space to operate so I had two large glass custom enclosures built that measured H 48”x W 24” x D 24”. I wanted to make the enclosures with some realistic features in order to give the geckos a sense of security. I used black “expand a foam” to affix large pieces of flat cork bark to the backgrounds and filled in the gaps with extra foam. I covered the exposed foam before it cured with dry coir.  I used a combination of large pieces of cork bark tubes to accent the interior of the enclosures and added 2” in diameter sections of Maple Tree branches. At the bottom of each enclosure I used expanded peat moss, flat pieces of slate on top and filled the gaps with medium sized river stone. In addition, a deep dome fixture with 26 watt 2.0 compact fluorescent was added to each set up. Even though P. kuhli are mostly nocturnal, I always find them basking out in the open using their camouflage to blend in on pieces of bark. I keep them at 75-85 (F) during the day with a night drop to no less than 70 (F).  In order to keep the humidity up, I consistently mist them at least once a day around dusk or at night when they are most active.

What I find most interesting about P. kuhi is their relatively docile behavior during most of the day when they are at rest. Once night time comes and dark settles in, these geckos are awake and full of energy. They prowl their enclosure with stealth and with a quick sudden burst of energy they strike unsuspecting crickets with deadly accuracy. On one occasion I was awakened at night by numerous loud sounds coming from the gecko room and witnessed two P. kuhli jumping back and forth, slamming into the enclosure’s glass sides, one chasing another. Later that night, I witness the same two geckos copulating.

The biggest challenge with this species is finding captive bred specimens. This being said I wanted to focus on breeding the wild caught group I acquired and pass them on to other breeders working with captive bred geckos. From my experience even though P. kuhli are very hardy and thrive in captivity, I find that there are two additional challenges to captive bred P. kuhli: one being, females are egg gluers and two, the incubation times are long compared to other geckos. The challenge with egg gluers is covering the eggs or removing the eggs attached to whatever surface the eggs are adhered to. The most common method is taping clear portion cups to cover the entire surface enclosing each pair of eggs in its own mini incubation chamber (I would release the taped cups and check on the eggs’ development every week). This can only work on a smooth surface   such as glass. Going forward,  I hatched out my first P. kuhli after 6 months of incubation at room temperature with  day time temperatures of 75(F) and night drops to 70 (F).  I found my second clutch hatching at around 4 months and they were closer to the source of lighting and temperatures ranging from 79-85 (F) for at least 8 hours during the day.

In the end, I hope more breeders add these cryptic creatures to a breeding project in their collection. They are an underrated gecko and should be at the top of anyone’s must have list. 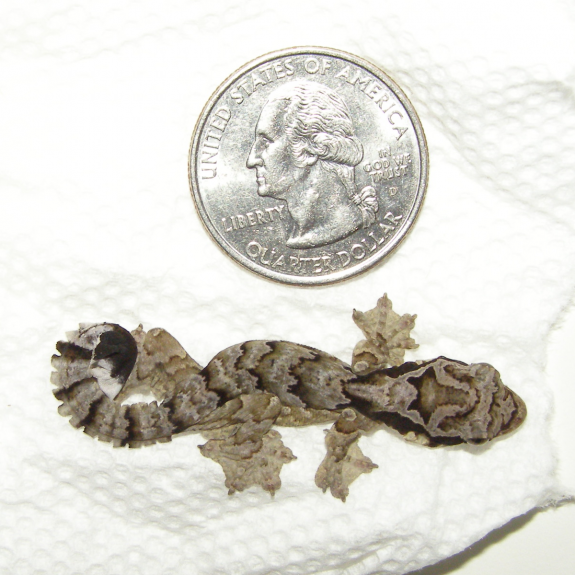 Ptychozoon is an Asian genus of gecko with numerous species, though only kuhli is commonly seen in the hobby, so this article will focus on the Kuhl’s flying gecko. A commonly imported species, Kuhl’s flying gecko (hereafter called simply flying geckos) is an underrated and undervalued species, as with most regular imports. I’ve found a lot of hobbyists are scared to keep flying geckos, due to their reputation of dying quickly and being covered in mites. Their reputation is well deserved, but it doesn’t have to be.

I regularly go through flying geckos when they come in, and buy the best, healthiest ones, whether I need them or not.  Flying geckos come in dehydrated, stressed, and with mites and mite eggs hidden in the many folds of their flesh.  The first thing I do when I get them home is set them up and hydrate them. I use paper towel and egg crate for the first few months, because I regularly throw everything in their cage away. For the first week, I just let them relax and recover. Housing them singly, I take them out about once a week and remove all visible mites, and completely gut their cages. The best way to remove the mites is with a cotton swab/cotton bud/brand name Q-tip. Some mites will simply wipe off with a damp swab. The more tenacious ones need a dab of olive oil (again, delivered with a swab), to make them release. This method is the one that has by far given me the best survival rate.  Once the mites are removed, I normally hold them in these cleaning cages for another month to be sure.
After they are cleaned up, they are set up in planted, tall vivariums with moderate heat and moderate to high humidity. If your plants are surviving, you are probably in the right range. Flying geckos eat insects exclusively and voraciously. If things are going well, I normally place a male in with a female. Sometimes in groups, depending on the specific geckos involved. Eggs are glued inside the cage, and no attempt should be made to remove them. Hatchlings are not eaten by the adults, but I do remove them as soon as they hatch, so I cannot say what will happen if left in long term.

Hatchlings are, in my experience, slightly fragile and must be well hydrated and well fed to thrive. I offer insects almost every day, and water daily as well. I keep hatchlings communally, as long as they are very close in size. Once they are established, they are very hardly and grow at a steady pace.  These captive bred animals are highly sought after and often go for ten times the price of their wild caught parents, if they ever make it to sale.

Lonnie Cornell grew up in Mission Viejo, California in a neighborhood bordering O’neill Regional Park and connecting Trabuco Canyon. These surrounding areas thrived with reptiles and amphibians  which Lonnie grew accustomed to finding on a weekly basis. As a kid his parents allowed him to keep various reptiles and amphibians in a space in the garage. He had his first experience with geckos (Hemidactylus) while visiting family members on Oahu, Hawaii with his parents in the 1980s, but in his 20’s while attending The University of Hawaii it was his numerous encounters with Day Geckos (Phelsuma) that has forever changed how he spends his free time.

Lonnie has approached his interest in being a responsible gecko keeper and breeder by focusing on buying other captive bred geckos from the top breeders in the US. He has been intrigued by a few cryptic species and has acquired a few WC geckos for future projects. He is currently maintaining a collection that includes Rhacodactylus, Hemidactylus, Cyrtodactylus, and 18 species of Phelsuma. He can be contacted by email at [email protected]

Dan Martindale has been keeping herps since he was 8 and loved working with various lizards, geckos, skink, frogs and toads and many others.  Currently he has a small business and hopes to offer a wide variety of captive bred reptiles.  He does not raise his animals on a simple diet of just 1 bug; his critters enjoy a varied diet of about 5 regular prey types and a few extras like Silkworms now and then.  He is currently working with Leopard geckos(Eublepharis macularius), crested geckos(Correlophus ciliatus), flying geckos (Ptychozoon kuhli) and mourning geckos (Lepidodactylus lugubris).  He is  a co-owner of Chaotic Nights Reptiles.  One day he hopes to be able to do what he loves for a living and a hobby.