It should be no surprise that the Gecko Time editors are more involved with geckos than just editing our publication.  For the first time in 2 years –since Matt moved up to the Boston area from Georgia– we present to you the faces behind the blog, or, What We’re Up To In The Reptile (and Amphibian) World.  We each tried to address the following questions:

I’m in the middle of my 9th season of gecko breeding and still going strong.  I had some worries 3 or 4 years ago when sales dipped significantly along with the economy and I wondered if it made sense continuing to produce geckos.  However, I’m pleased to say that I’ve consistently been able to sell out for my season every year by January or February, so there’s no end in sight.  My “permanent” collection of geckos stands at 38 at the moment and includes the leopard geckos, African fat tails, SW banded geckos (Coleonyx), and gargoyle geckos that I breed as well as a leachie, two members of the Phelsuma genus (P. klemmeri, P. laticauda), and a crestie.  The “reptile household” also includes two that are not geckos: a bearded dragon and a steppe runner. These are all housed in my living room and dining room. 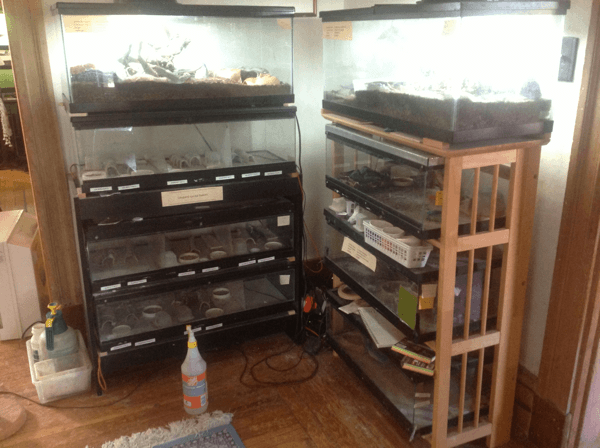 I began as a leopard gecko breeder and that remains my biggest passion with breeding. I generally breed four 1.2 groups though it’s rare that all 8 females produce.  This year is no exception.  Six of the females are laying regularly, one produced only a few infertile eggs and will try again next year and one seems to be reabsorbing all her eggs.  Still, 6 out of 8 isn’t bad and to date I’ve produced 25 babies with many eggs still in the incubators and in the geckos.  I’ve been less successful with the fat tails.  Only one female is producing.  An unfortunate spike in the rack temperature last month caused the death of 4 AFT hatchlings so the total number will be down for this season.  I have already equalled last season’s gargoyle hatchling number with 3 and my second gargoyle breeding season finds me with 6 eggs still in the incubator and more eggs to come.  With a new red male breeder, the hatchlings are much more colorful this season than last. Mercifully, my Coleonyx production is slower this season than last, when my female laid fertile eggs for 11 months without a break.  One of the things I’m most pleased about this season is that so far every hatchling has been healthy.  That’s no guarantee; usually a few are born without the ability to survive or with mild to moderate defects that are compatible with a decent quality of life.  It’s nice not to have to worry about it to date.

A small scale breeding business can’t change greatly from year to year without either growing significantly or radically changing the breeders that are used.  Since I’m not willing to part with most of my breeding geckos, I’m limited in what can be “new” each season.  That said, I’m pleased to be working with eclipses for the first time, having acquired an eclipse and a het eclipse female from Kristi of Ghoulish Geckos.  As an interesting bonus, the het eclipse gecko appears to be, unknown to me (and I think to Kristi), a Mack Snow since her first clutch by a male Mack Snow yielded a super snow.  My other eclipse female appears to have produced an eclipse hatchling with my 9 year old Tremper albino male.  What’s up with that? 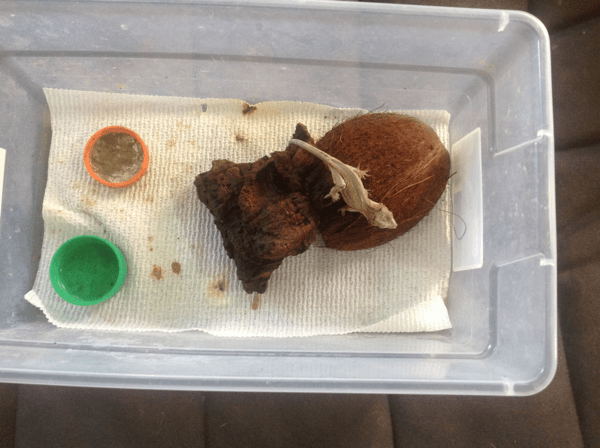 As for the future, there’s enough new projects beginning this year to keep me busy for awhile.  I’m limited by what will fit in my living space, though I seem to be able to find new places for cages every time I think I’m at capacity.  For a small scale breeder, some of the attraction is, instead of “branching out” to find ways to accomplish “branching in”.  By that I mean, finding  ways to make the geckos I have produce new and interesting offspring with a minimum of “new blood”.  So far, I’ve been up to the challenge. 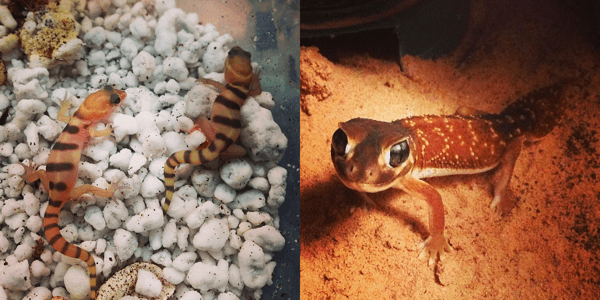 In addition to the geckos I also have a growing dart frog collection and two axolotls.

I’ve also produced some offspring from my odd geckos, including: banded geckos, viper geckos, web foot geckos, Bynoe’s geckos, pictus geckos, and mourning geckos. I always intend to breed every species I own each year but with work and general care and upkeep I always forget to breed a few species.

The frog hobby is much different from the gecko hobby in many ways. I think the easiest way to describe it is political. Any new breeder popping up without heavily documented bloodlines is often shunned. It’s an adjustment from the openness I’ve experienced with geckos but there are a lot of helpful people I’ve come to learn from. It helps that Black Jungle is a only a few hours away.

Don’t worry, I’ve come to learn that even gecko keepers are allowed to keep frogs. I know two other breeders I admire who have fallen in love with them as well, including GCS Reptiles & Australedonian Geckos and Dart Frogs. 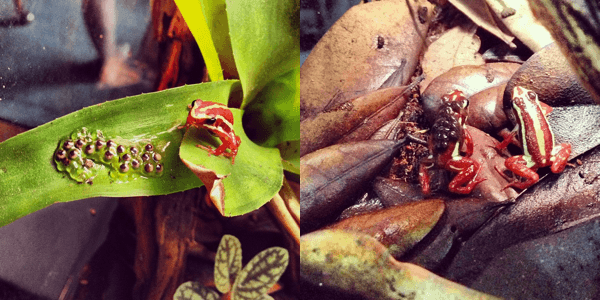 I’ve been most satisfied with the offspring from my tangerine and mack bold stripe lines. These projects are two years old now and producing some neat offspring.

I’ve also been really excited about my frogs. Doing water changes on tadpoles every other day is time intensive but it’s a very cool experience so far and I’m pumped to see these turn into little frogs. [ed. note:  Matt’s frogs are very cool and I get to visit them without having to own any! –Aliza] 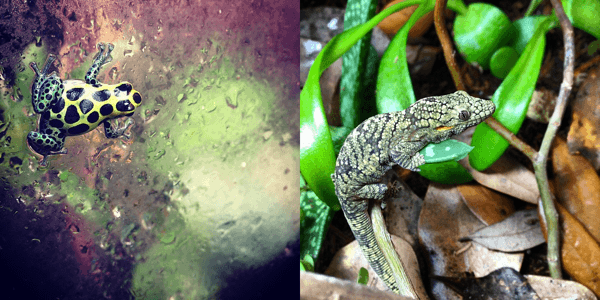 The current plan is to reduce a few of the species I own. I always say that, but it is time to trim back. Then, focus on making the collection I have. I’d love to have everyone in a more naturalistic setup like the dart frogs.

You can follow my site for updates: Geckos by Matthew.