Some time ago a male and female Phelsuma grandis were brought to me as “rescues”.  The geckos were dropped off because they were not wanted anymore.  P. grandis, commonly known as the Giant Day Gecko, are the most popular day geckos in the hobby. If anyone is planning to get their first day gecko everyone usually recommends the P. grandis.

It’s a recommendation I don’t agree with.

P. grandis are disposed to have skin problems.  If humidity is too low, a shed may not remove easily from the skin or toe skin will fail to come off.   Poor nutrition can contribute to shed problems and ability to adhere to surfaces.  These two surrendered geckos showed signs of skin problems.

But back to the two surrendered geckos:  the owners left a terrarium with furnishings (substrate, plants, bamboo) and a UV compact florescent and fixture that they said was purchased a week earlier. They thanked me and left. The two grandis were adults approximately 11” in length and had good body fat evidenced by the fat deposits around the upper tail area.  Both geckos had skin that was nearly black from stress.   A closer look at these two geckos hinted there were some problems. Many of the toes had bits of skin shed still attached and one had shed skin still sticking to the underbelly.   A quarantine habitat was set up with a linear fluorescent fixture and a 10 watt halogen basking light.  To reduce stress during the geckos’ acclimatization the terrarium was put in a warm, private area  and covered with newspapers. Inside the tank the environment was set with 60% humidity, temperatures in the low 80’s, and a basking area topping the mid ‘90s: an ideal habitat for P. grandis.
The two geckos were put in.   That’s when I noticed it.

As they were warming up to room temperature after a long car ride on a cool day, one of the grandis’ began to  turn green, but the second grandis remained black.  More telling were the slick sticky look areas on the back and head.  As time passed, one grandis continued to return to the normal green color with  red markings but the second remained dark.

Looking more closely at the darker gecko I noticed that I was unable to see any of the usual grandis markings: there was no visible red stripe running from the nose to eye, nor were there any red markings on the back. It became apparent that this P. grandis was severely burned over its back from the tip of its nose, over the back and to the tail.
This was the first burn I’ve ever witnessed on a gecko. 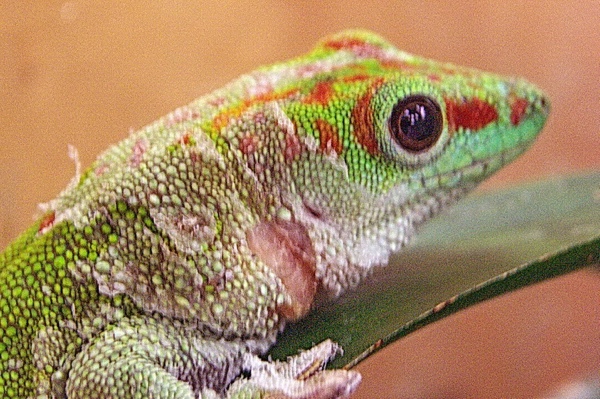 My preferred lighting for all day geckos including P. grandis is linear NON-UV lights and halogen basking lights with dimmers so I can control the basking temperature. Due to my preference for non-UV lighting with day geckos, it’s necessary to provide greater amounts of dietary D3 and calcium. For the past 15 years I’ve had great success. Using linear non-UV fluorescent bulbs and halogens I had never had a gecko get burned.  Although compact bulbs are more prevalent in the reptile industry I hadn’t incorporated many in my collection.

Reptile keepers choose light bulbs for three reasons:  light, UV and heat.  Linear fluorescents were the primary choice for keepers for many years but lately, compact UV fluorescent bulbs have become very prominent. The compact fluorescent streams more light by tightly compressing its output into a small round area. The florescent in this tight little package also provides heat in a downward directed space expected for heat lamps. But its tight spiral also increases UV intensity,  often dangerously so. Invisible UV rays can cause skin and eye damage and burns that are not initially noticeable.

The favorite gecko-hang out will be under that bright, warm compact fluorescent light. As there were two large geckos one was bound to be dominant and got the best light most of the day.  Also worth noting, day geckos often bask with the head inclined downward and lower than then their bodies. The physical situation of this poor grandis demonstrated the reason compact fluorescents should be used cautiously.

The first grandis had burns around the head area, serious but treatable. The second grandis had significant burns across the whole head and back and didn’t make it.  He lived three more miserable days despite veterinarian intervention.  All we could do was to offer pain relief and  misting to cool the skin. The female survived and is alive and well today.

By now most reptile keepers know about the dangers of UV producing compact lights and how to safely use them.  Linear UV producing bulbs should be placed four to eight inches from a gecko’s basking area.  This is usually sufficient for safe absorption of UV coming from the bulb.  With compact UV bulbs, both heat and UV should be considered.  A thermometer or a heat gun can measure the heat that reaches a basking spot.  Then consider how much UV is reaching the basking spot.  A UV meter would be helpful.
Manufactures may have recommendations which can be followed but I have always made my own measurements.

Since the pair of P. grandis came into my care I’ve become increasingly aware of the benefit and potential harm of the lights I put over my geckos.  I continue to use mostly non-UV lights but I’ve added some compact fluorescent bulbs when appropriate.  Betty, the surviving P. grandis, is alive and well.  She has grown older and her scars are more evident but she is a happy, well-cared for gecko. 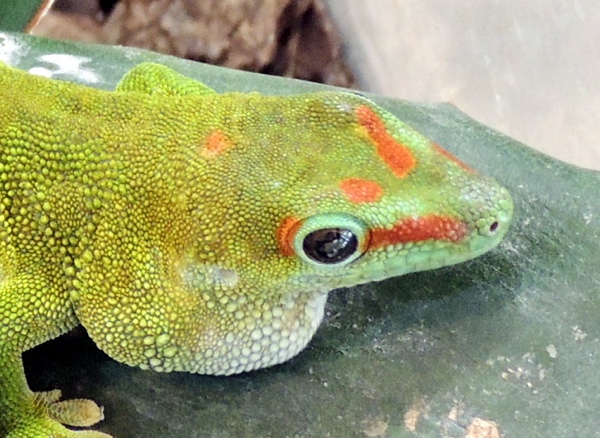 Check out this link for some additional information:
http://www.uvguide.co.uk/phototherapyphosphor-summary.htm

Leann and Greg Christenson have been keeping and breeding Day Geckos (Phelsuma) for many years. They are tireless advocates for this species and have done much to insure that interested keepers are educated about how to keep Day Geckos properly through their website (www.daygecko.com) and their book, “Day Geckos in Captivity” published in 2003.